NFL ratings, a look forward: The 2021 NFL regular season has arrived, following a 2020 campaign that saw interest in the sport trend both up and down.

Below, we look at NFL TV ratings and the 2021 season, with the latest updates regarding the Tampa Bay Buccaneers’ thrilling 31-29 win over Dallas Cowboys in the NFL Kickoff Game and the Los Angeles Rams’ victory over the Chicago Bears on Sunday Night Football, the Las Vegas Raiders’ Monday Night Football win over the Baltimore Ravens and the first Thursday Night Football game.

The 2021 debut of Thursday Night Football, a matchup between the New York Giants and Washington Football Team, likely delivered even better ratings than NFL Network hoped for in Week 2.

According to SportsMediaWatch, the Thursday Night Football opener averaged an estimated 7.33 million viewers on the NFL’s exclusive TV network. It was the largest season-opening audience for TNF since 2017, when 8.08 million people watched the Houston Texans and Cincinnati Bengals.

For comparison, the 2020 TNF opener between the Cleveland Browns and Cincinnati Bengals averaged 6.68 million viewers. Of the three exclusive TNF broadcasts on NFL Network last season, only one exceeded 6 million viewers.

The Las Vegas Raiders’ stunning and drama-filled win over the Baltimore Ravens represented the most-watched Week 1 Monday Night Football Game since all the way back in 2013. In total, 15.29 million viewers tuned in. Meanwhile, 800,000 watched the “ManningCast” on ESPN2 with brothers Eli and Peyton.

A lot of this could have had to do with the game itself. Baltimore opened up a 14-0 lead in the first half before the Raiders came storming back. It was their first regular-season game in Vegas with fans in attendance. The game also came to a culmination on this touchdown pass from Raiders quarterback Derek Carr in overtime.

Here’s a breakdown of the numbers from the league itself.

After NBC cashed in with a massive audience for the NFL Kickoff Game, its numbers dipped on Sunday Night Football. The Week 1 primetime clash between the Rams and Bears averaged 17.6 million viewers and finished with a 9.6 rating.

Cord-cutting might play one factor in the declining ratings across television. Cord-cutting has resulted in an estimated 12.82 million cable subscriptions since 2019, per MoffettNathanson, and it’s estimated 27 million households have cut since 2014.

Moving forward, the NFL may attempt to feature teams like the Cowboys, New England Patriots and Green Bay Packers to aid ratings for the SNF opener.

Sports Business Journal’s John Ourand reported that the Dallas-Tampa Bay 15.9 overnight rating was up 16% from 2020’s opener between the Houston Texans and Kansas City Chiefs. It was also a five-year high in overnights.

Ourand noted that the rating figure doesn’t include out-of-home viewing. In other words, it was a raging success. That’s what happens when you pit the GOAT QB in Brady against the NFL’s highest-paid player in 2021 in Prescott, who also happens to play for the most valuable sports franchise.

NFL continues to get good news to start the preseason

NFL Network’s broadcast of the Washington Football Team and New England Patriots game on Aug. 12 drew the highest TV ratings for a preseason game on the flagship station since all the way back in 2018. The matchup saw 1.75 million viewers tune in.

This is especially significant in that the preseason game went up directly against MLB’s Field of Dream Game between the New York Yankees and Chicago White Sox, which also drew historical ratings from a television perspective.

A total of 7.31 million viewers tuned in to the Pittsburgh Steelers’ win over the Dallas Cowboys earlier in August, marking the highest-rated preseason broadcast since all the way back in 2017. There’s good reason for this. The entire 2020 preseason was canceled due to COVID-19 and fans were desperate for some football action.

To put this into perspective, the 2021 NBA Finals between the Milwaukee Bucks and Phoenix Suns drew an average of 9.91 million viewers (more on that later). This just goes to show us that the NFL is still America’s pastime.

2021 NFL Draft was the third-most watched ever

There wasn’t a ton of drama atop the 2021 draft with the Jacksonville Jaguars eyeing Trevor Lawrence at one and the New York Jets linked to BYU’s Zach Wilson with the second selection. However, intrigue when it came to the San Francisco 49ers trading up to No. 3 led to continued uptick in viewership with the annual event seeing its third-highest ratings ever.

“Per a league press release, the 2021 NFL Draft was seen by an average audience of 6.1 million viewers (TV and digital) across NFL Network, ABC, ESPN, ESPN Deportes and digital channels during the three-day event, making it the third most-watched draft ever,” NFL Media noted. “The three most-watched drafts in NFL history have occurred in the last three years: 2019 (6.2 million), 2020 (8.3 million), 2021 (6.1 million).”

Continued interest in the NFL Draft is a great thing for the league. It started out as nothing more than a niche event for the most hardcore of fans. Now, it’s a three-day event that shows just how popular the NFL is compared to the other three major North American professional sports leagues. Don’t expect this to change in 2022 with the draft heading to Las Vegas.

Perhaps, fans were not excited to see Tom Brady play in his 10th Super Bowl. There’s a good chance that the lack of parties due to the COVID-19 pandemic played a role, too. Either way, Super Bowl LV between the eventual champion Buccaneers and Kansas City Chiefs represented the worst ratings for the big game since all the way back in 1969.

According to Sports Media Watch, the game drew the lowest ratings for a championship bout in the league since Super Bowl III between the then-Baltimore Colts and New York Jets.

That specific Super Bowl matchup saw Joe Montana and the 49ers defeat John Elway’s Denver Broncos by the score of 55-10, the biggest blowout in the history of the big game.

NFL TV ratings were a mixed back throughout the 2020 season. The pandemic coupled with an election year and political divisiveness around the United States played a major role in this. With the league struggling revenue-wise due to COVID-19, seeing one of the lowest-rated Super Bowls in NFL history can’t be seen as a great thing. 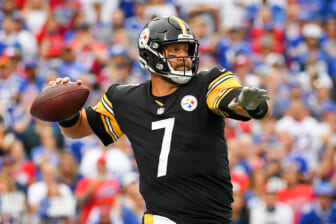 “TV networks are feeling the strains of disappointing NFL ratings, as they are forced to restructure deals with advertisers to make up for the smaller audience, and their opportunity to make money off remaining games during the lucrative holiday season narrows,” the Wall Street Journal reported this past weekend.

Those close to this situation called it “unheard of.” Some of the broadcast networks, such as CBS and Fox, even considered having advertisers pay less than what they had originally pledged to air ads during NFL games.

Before the 2020 NFL season began, ESPN worked desperately to lure in a broadcasting crew that would entertain fans and increase viewership. After missing out on Tony Romo, Peyton Manning and even Sean McVay, ESPN settled on its backup plan.

Unfortunately for the network, in a year that saw the company lay off 300-plus employees due to the COVID-19 pandemic, NFL ratings took a major hit. Monday Night Football was already the lesser football package for NFL games and the decline in viewership didn’t help in 2020. 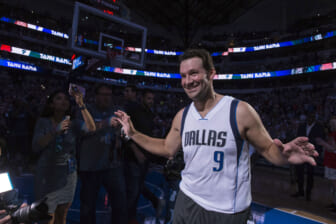 The NBA and its players were the most active in calling for systemic change in the United States and supporting the Black Lives Matter message last year. This created somewhat of a split between those on either side of the political line.

What we do know is that the 2021 NBA Finals between the eventual champion Milwaukee Bucks and upstart Phoenix Suns did not draw great ratings.

This comes after the Los Angeles Lakers’ 2020 NBA Finals win over the Miami Heat drew a record low average of 7.45 million viewers in the Orlando Bubble.

In comparing to the NFL, there’s really no competition here.