Make no mistake about it, this is going to be a difficult game for the Bills at home against a stout Washington defense. With that said, we have to go with the team coming off a shutout win. That’s magnified with Washington having to rely on its backup quarterback now that Ryan Fitzpatrick is sidelined.

Week 1 — Buffalo Bills lost at home to the Pittsburgh Steelers, 23-16

This is not the way Buffalo wanted to start its 2021 season. A team with clear-cut Super Bowl expectations, Sean McDermott and Co. fell to the Steelers at home by the score of 23-16. Josh Allen was forced to throw 51 passes and lost a fumble in defeat.

What a difference a week makes. Fresh off a loss to Pittsburgh to open the season, Buffalo throttled the division-rival Dolphins by the score of 35-0. Its defense did the heavy lifting here, recording six sacks of Dolphins quarterbacks and forcing three turnovers in the blowout win.

We may see the legitimate self-actualization of Josh Allen as a football player in this one. The Buffalo Bills QB is going to have darn near a perfect 158.3 passer rating as he carves up Houston at home. These Texans are the worst team in the NFL and could be looking at an 0-17 season. That’s not hyperbole.

A rematch of last year’s AFC Championship Game, we’re pretty darn sure Buffalo is going to want to make a statement in Arrowhead come Week 5. Unfortunately, I am just not seeing how its defense is going to be able to stop Patrick Mahomes and Co. The Chiefs improved their offensive line big time during the offseason after that unit failed them during the Super Bowl. That will be the biggest difference in this high-scoring affair and potential championship game preview.

If you’re looking for a high-scoring affair, this season’s matchup between the Bills and Titans should deliver. Both teams don’t have an elite pass rush, which is dangerous against offenses like the ones they will each face. Playing in front of a big crowd might give Tennessee a boost, but the better team and top talent usually comes out on top.

These division rival’s two games a season ago could not have been any different. Buffalo came out on top during a Week 2 game in South Beach by the score of 31-28. Then in Week 17, the Bills absolutely dominated their counterparts by the score of 56-26 in Western New York. Regardless of how much Miami has improved from a speed standpoint on offense, it still doesn’t have the talent to take out the Bills in Buffalo.

Two players named Josh Allen in this contest, but the Bills have the better, more valuable one at quarterback. Allen should dismantle the Jaguars, and a seasoned defensive coach in Sean McDermott will scheme up too many exotic looks for Jacksonville’s offense to keep pace in a shootout.

Competitive ball. That’s going to be the name of the game for Robert Saleh in his first season as the Jets head coach. Narrow losses. That should also be the name of the game given New York’s issues on defense and the fact that it will be relying on a rookie quarterback. With the ascension we’ve seen from Josh Allen and the presence of Stefon Diggs, this should be enough for Buffalo to come out on top in a narrow affair.

We might not see the Colts get into a ton of shootouts in 2021, but this might be one of those matchups. Buffalo couldn’t generate pressure last season and did very little to improve the secondary, a way to offset the issue. The Bills do have one of the NFL’s best offenses and in a matchup between these two quarterbacks, give us Josh Allen. 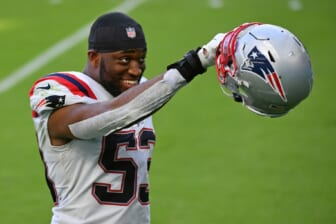 Expect a different iteration of the Saints without Drew Brees in the mix. Also expect some major growing pains under center regardless of whether Jameis Winston or Taysom Hill is starting. That will be magnified heading into Western New York for this Week 12 matchup. New Orleans might be able to contain Josh Allen and Co. to an extent, but it won’t score enough to come out on top.

In winning their first division title since 1995, the Bills swept New England during the 2020 season. It culminated in a 38-9 blowout win on the road in Week 16. The Pats improved big time on offense during free agency and added a potential franchise guy under center in Mac Jones in the draft. Will that be enough to narrow the gap? At least initially, I am not seeing it on the road. Josh Allen and Co. should prove to be too much for these Patriots in this Week 13 affair.

Another potential pitfall in the Bucs’ pursuit of the best record in football. Josh Allen is a handful even for Tampa Bay’s loaded defense. However, if it comes down to the final minutes, who better to deliver the goods than the GOAT QB himself? Tom Brady will lead Tampa to a statement win here.

The Sean McDermott game. Carolina’s former defensive coordinator going up against a team that has high expectations heading into the 2021 season. As has been the case since Cam Newton was in his heyday, it’s about the quarterback position in Carolina. Sam Darnold heads to the Panthers after a disastrous three-season stint with the New York Jets that saw him boast a 2-3 record while throwing all of four touchdowns in five games against the Bills. You can do the math here.

Whether it’s rookie Mac Jones or struggling veteran Cam Newton under center, the expectation is that New England’s offense will still have a hard time scoring points to keep pace with the better teams on their schedule. Sure the Bills have their own issues on defense. But that will be masked in this Week X matchup.

If Julio Jones is not traded, Atlanta’s offense is going to be good in 2021. At the very least, it should help the Falcons stay in games against better competition. Unfortunately for new head coach Arthur Smith, their defense remains talentless after giving up nearly 25 points per game a season ago. We fully expect a shootout with Josh Allen and Co. doing enough against this embattled defense to come away with a home win. That’s especially true now that Julio Jones is in Nashville.

Robert Saleh is a better coach than Adam Gase. The Jets have a shiny new quarterback in Zach Wilson taking over for the struggling Sam Darnold and should be exciting on offense. Even then, New York is at least a year away from actually competing with other AFC East squads. Primarily, I am not sold on its makeshift defense being able to stop Josh Allen, Stefon Diggs and Co.