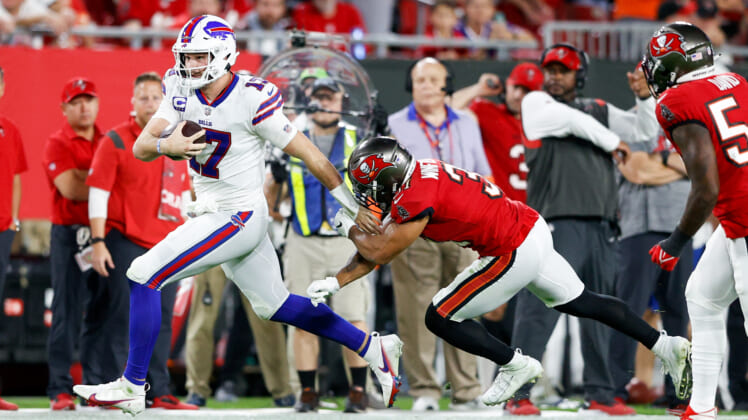 Super Bowl 2023: The Los Angeles Rams took out the Cincinnati Bengals in Super Bowl LVI, bringing an NFL title to the City of Angels for the first time in nearly 40 years.

As training camps approach, we figured it makes sense to look at who we predict to go up against one another in Super Bowl LVII in Arizona next February.

Who will be the Super Bowl 2023 winner in the next calendar year? Check out Sportsnaut’s predictions, which will be updated each week during offseason and regular season.

This division is going to be extremely interesting in 2022-23. The Las Vegas Raiders (Josh McDaniels) and Denver Broncos (Nathaniel Hackett) have new head coaches. Denver trading for Russell Wilson gives them as good a shot as any other team in the AFC West.

Meanwhile, the Los Angeles Chargers boast one of the best young quarterbacks in the NFL in that of Justin Herbert. Yet the Raiders might be the leaders for the biggest offseason splash, having landed Davante Adams and Chandler Jones.

Coming off a 12-win season and their fourth consecutive AFC Championship Game appearance, we’re still having a hard time picking against Kansas City here. Despite his struggles in the title game this past January, Patrick Mahomes remains an elite threat.

Even after trading Tyreek Hill, they ended up with a solid WR corps led by JuJu Smith-Schuster and Marquez Valdes-Scantling, and draft newcomer Skyy Moore. Of course, Travis Kelce will likely still be the top target in KC, which keeps some continuity at least. Either way, the Chiefs will have a high-powered offense as long as Mahomes is in town.

The Bengals proved they are legitimate Super Bowl contenders. The Joe Burrow to Ja’Marr Chase connection was absolutely brilliant throughout the regular season and Cincinnati’s playoff run. After upgrading the right side of the offensive line, Burrow should have even more time to spread the ball around. That’s a scary proposition for opposing AFC North squads.

The Pittsburgh Steelers will rely on either Mitchell Trubisky or rookie Kenny Pickett under center following the retirement of two-time champion Ben Roethlisberger, but still boast a strong enough defense to compete.

The Baltimore Ravens took a major step back a season ago, lost Marquise Brown and have the Lamar Jackson contract situation to deal with. Yet another strong draft class could keep them in the run until the end.

The one wild card here is the Cleveland Browns. They followed up a surprising playoff appearance following the 2020 season with a dud of a performance last year. Depending on how Jacoby Brissett handles the first six games of the year in Deshaun Watson‘s absence, the Browns could have a much better team in 2022.

Likely the worst division in the AFC, there’s really only one other team in the South who can compete with the defending champion Tennessee Titans. Sure there’s some concerns about quarterback Ryan Tannehill after his brutal performance against the Cincinnati Bengals in the AFC Divisional Playoffs. Even then, the presence of Derrick Henry and a potentially dominant defense makes Tennessee too difficult to beat in this division.

This is magnified by the fact that every other team in the division has major question marks. The Houston Texans and Jacksonville Jaguars will be premiering new head coaches. Houston’s situation is about as bleak as it gets until they can actually develop some of their new draft additions from the Watson trade. The Jags have lost 29 of their past 32 games and boast a struggling young signal-caller in Trevor Lawrence, but a much-improved roster. Can they go from worst to first? It would be a major leap.

In Indianapolis, the Colts have moved on from Carson Wentz, and brought in a former MVP in Matt Ryan. It’s a major upgrade and could have them vying for the division crown after adding to their receiver room through the draft with Alec Pierce and Jelani Woods. It’s been a long time since Matty Ice has had a playoff roster around him, and it could lead to more magic than we think. 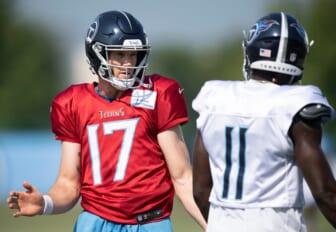 Also Read:
How the Tennessee Titans’ trade of A.J. Brown will impact Ryan Tannehill and Co. in 2022

Though they’ve faced plenty of obstacles of their own, Josh Allen has gotten the Buffalo Bills back on top of the AFC East. Perhaps adding Von Miller can help them stay there. They’ve also improved in the trenches by adding Rodger Saffold and Tim Settle in free agency. These additions have the Bills as the current Super Bowl 2023 favorites, and some suggest they have the best roster in football.

As for the rest of the AFC East, it’s going to be all about the New England Patriots putting pressure on Buffalo in Mac Jones‘ second season. Though the Miami Dolphins’ huge offseason in which they’ve added Terron Armstead and Tyreek Hill to a young, developing core has to be seen as a threat. The Jets are still a step behind, but after an incredible draft class, this could be a team ready to soar. It’s all about the growth of Zach Wilson.

As for the AFC Wild Card teams, we’re looking out west. Led by young quarterback Justin Herbert, we’re going with the Chargers to snag one of the spots. They stepped up big in free agency, adding Khalil Mack and J.C. Jackson to a defense that couldn’t stop anything a year ago. Can Herbert help the Chargers take a Bengal-sized leap to Super Bowl 2023?

Of course, you can’t forget about Vegas. Davante Adams and Chandler Jones are difference-makers and they were already a playoff team. As long as they can stay afloat in the toughest division in football, there’s no reason why they can’t reach the postseason once again.

It’s tough not to also pick the Denver Broncos here, but one of these AFC West teams has to be on the outside looking in. Instead, we’re picking the Baltimore Ravens to have a bounceback season, with Lamar Jackson putting up one of his best years yet.

The offensive line is reinforced, and Rashod Bateman’s ready to be the No. 1 (still behind Mark Andrews), but most of all, this team is already much healthier than they were at this point last preseason. I also see Baltimore’s defense returning to a top-ten unit off the backs of several additions and injury reinforcements.

This division will continue to be a battle between the defending champion Rams and the San Francisco 49ers. However, the Arizona Cardinals can’t be ruled out. A new and improved group of pass-catchers featuring a healthy DeAndre Hopkins to go with Marquise Brown and Rondale Moore make for an electric cast for Kyler Murray to grow with, and they too are coming off a playoff berth. Unless the wheels fall off, the Cards will compete into December.

What we do know is that the Seahawks are a step behind these three teams. They are coming off a losing season and just basically folded on the 2022 season when they traded their franchise quarterback to Denver. Drew Lock and Geno Smith aren’t bringing them to the promised land.

Related: 12 highest-paid quarterbacks in the NFL

With Aaron Rodgers announcing a return to the Green Bay Packers for another four seasons, this spot seems secure. Obviously, the NFC North race would have changed on a dime if the two-time reigning NFL MVP requested a trade to another team, but those talks never got far. For now, these Packers have to be seen as legit favorites with Rodgers still in the mix, even after parting with his leading receiver.

There’s some question marks behind Green Bay in the NFC North. The Minnesota Vikings have hired a new head coach and general manager combo. Sticking with Kirk Cousins at quarterback could be risky, but they have maintained a roster built to at least compete for a Wild Card spot in the NFC by adding several veteran defenders who can help them morph into a 3-4 defense. And the offense is still a top-10 unit when firing on all cylinders.

Meanwhile, the Chicago Bears also have a completely new regime. How might that look? Chances are, it’s not good. As for the Lions, they might be able to become the second-best team in the division, but it depends on how consistent Jared Goff can be with a new stable of weapons.

Check Out: Take a look at NFL.com’s deals on Green Bay Packers wares, including hoodies, gifts, and more

Is Tom Brady’s retirement firm? Of course not! He could only relax for 43 days before begging to come back, and we’re all thankful for it. Well, not the other three teams in the NFC South, they’re not doing so well. The Buccaneers will be a threat to represent the NFC in Super Bowl 2023.

As for the remainder of the NFC South, it’s a mess. The Carolina Panthers and Atlanta Falcons don’t have starting-caliber quarterbacks, so we can almost rule them out. The New Orleans Saints are stuck between bottom-end playoff contention and a complete rebuild under veteran quarterback Jameis Winston. Yet, it appears with the selection of Chris Olave and the signing of Tyrann Mathieu, the Saints are going all-in down in the Big Easy, and it just might help them sneak into a Wild Card spot.

One could argue the Dallas Cowboys failed to improve their roster on their quest to Super Bowl 2023 after parting with Amari Cooper and botching the Randy Gregory negotiations. But there are plenty of reasons for optimism in the Lone Star State.

Micah Parsons is a full-blown superstar already just one season into his NFL career, having won Defensive Rookie of the Year. Dak Prescott is one of the best in the business and should continue to dominate next season with CeeDee Lamb, Michael Gallup and Ezekiel Elliott all set to return.

There’s also reason for optimism in Philadelphia with young quarterback Jalen Hurts under center and A.J. Brown pairing with De’Vonta Smith to form a wicked duo. The New York Giants are an interesting team to look at this offseason with a major upgrade at head coach and a strong draft class, what can Daniel Jones become under Brian Daboll? Meanwhile, the Washington Commanders have tried to supplement Carson Wentz with more weapons, adding Jahan Dotson in the first round. Will their defense suddenly be better too? 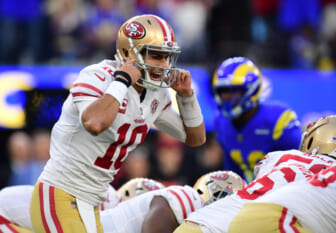 The NFC Wild Card race will be up for grabs. For now, we’re going with the new regime in Minnesota to lead this squad back to the playoffs. Bringing in Za’Darius Smith to pair with Danielle Hunter should help improve the defense, and after improving the secondary, this unit could be much-improved. Plus, Justin Jefferson is just unfair.

As for the Eagles, they boast the most upside of any contender after supplying Jalen Hurts with a fully-stocked roster. If the NFC East is largely uncompetitive once again, the Eagles shouldn’t have a problem snagging a Wild Card spot. Improvements on both sides of the ball could lead to their fifth playoff appearance in the past six years.

We also like the Arizona Cardinals to stay motivated after reaching their first playoff berth with the Kliff Kingsbury/Kyler Murray combo. Maybe if he had his playmakers on the field, the playoffs could have gone differently. This is a potent offense, but the defense could be their sore weakness.

Check Out: Take a look at NFL.com’s deals on LA Rams wares, including hoodies, gifts, and more

Who will hoist the Lombardi Trophy in Super Bowl LVII? We look at our predictions for the NFL Playoff bracket.

Check Out: Watch the NFL on one of these amazing 80-inch 4k smart TVs