Before diving into the MLB games today here are the latest MLB standings in 2022. Sportsnaut’s MLB power rankings and MLB playoff predictions will provide additional perspective on where all 30 teams stand during the 162-game season.

What does MLB stand for?

Sportsnaut will provide the latest MLB scores throughout the 2022 season, with MLB standings updated each day.

How many teams are in MLB?

The MLB standings are broken down into six separate divisions, three each in the American League and National League. Each division has five teams.

How many games are left in the MLB season?

We’re well past the halfway point of the 2022 MLB season. Multiple games have been postponed until later this summer due to rainouts, resulting in teams having played a varied number of games. However, all 30 MLB teams have played at least 100 games thus far on the MLB schedule.

MLB standings use fractions, 0.5 games, to help determine the order when teams have played a different number of games. At the end of the 2022 season, every team will have played 162 games.

Who has the best record in MLB

How many wild card teams are there in MLB?

Each AL and NL Wild Card series is a best-of-three set. The No. 1 seed, the team with the best record in each league, hosts the winner of the 4 vs. 5 matchup. Meanwhile, the No. 2 seed faces the winner of the No. 3 vs No. 6 in the Divisional Round.

When is the MLB World Series?

The date for the 2022 World Series will be released later this year. The MLB regular season concludes on Oct. 5 with the playoffs beginning two days later. The 2021 World Series started on October 21.

Five days after the World Series concludes, MLB free agency begins. Below you can check out an overview of the loaded 2022-’23 MLB free agent class.

The Atlanta Braves won the World Series in 2021, defeating the Houston Astros in six games. Jorge Soler, who signed with the Miami Marlins this offseason, won 2021 World Series MVP after hitting three home runs and posting a 1.191 OPS with six RBI. It was a remarkable outcome considering Atlanta finished the 2021 regular season 12th in the MLB standings. 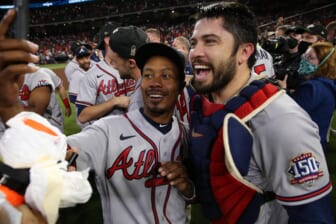