NFL standings 2022: Get ready for an epic season

Before diving into the NFL games today, here are the latest NFL standings for 2022. Sportsnaut’s NFL power rankings and NFL playoff predictions will provide additional perspective on where all 32 teams stand in a newish 17-game schedule heading into 2022.

What does NFL stand for?

NFL stands for National Football League, the most-accomplished gridiron league in the world. The origins of professional football dates all the way back in 1892 when Pudge Heffelfinger’s contract to play a game for the Allegheny Athletic Association against the Pittsburgh Athletic Club was purchased.

In the early years of the NFL, it was known as the American Professional Football Association starting back in 1920. It later became known as the NFL with the 1932 season representing the first true NFL Playoff Game between the Chicago Bears and Portsmouth Spartans (modern-day Detroit Lions).

Sportsnaut will provide the latest NFL scores throughout the 2022 season, with NFL standings updated each week.

How many teams are in the NFL?

Once the 1922 season came calling, pre-modern iterations of the Green Bay Packers and Chicago Bears were formed. The Chicago Cardinals (now in Arizona) were also a part of that league with the New York Giants (1925), Los Angeles Buccaneers (1926), Philadelphia Eagles (1933), Boston Redskins (1933) and Cleveland Rams (1937) joining over a 16-year span.

As for modern NFL expansion teams, the Houston Texans are the newest. They were formed in 2002 to bring the league to 32 teams.

How many games in the NFL season?

This past season represented the first time the NFL went to an 18-week, 17-game schedule. From 1978-89, 16 games were played over a 16-week period without any of the teams having a bye.

Who has the best record in the NFL?

In terms of NFL standings, the Green Bay Packers and Tampa Bay Buccaneers tied for the best record during the 2021 season with equal 13-4 marks. The eventual Super Bowl champion Los Angeles Rams equaled four other teams with a 12-5 regular-season record while winning the NFC West.

The Super Bowl runner-up Cincinnati Bengals finished with a 10-7 record and just a half game ahead of the Pittsburgh Steelers in the AFC North. The Tennessee Titans had home-field advantage throughout the AFC Playoffs, only to lose to Cincinnati in the divisional round.

How many playoff teams are there in the NFL?

The pandemic-centric 2020 NFL season saw the league add a seventh playoff team in both the AFC and NFC. That continued the following season and will be the case moving forward. NFL standings will dictate this moving forward.

When is the NFL Super Bowl?

This past year represented the first time it was played on the second Sunday in February and it will continue to be played on that day for the foreseeable future.

In his first season with the Los Angeles Rams, Matthew Stafford led his team to a dramatic 23-20 victory over Joe Burrow and the Cincinnati Bengals in Super Bowl LVI. Cooper Kupp won the game’s MVP with 92 receiving yards and two touchdowns. 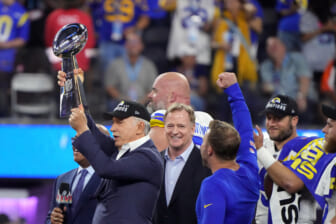