Before diving into the NBA games today, here are the latest NBA standings in 2022. Sportsnaut’s NBA power rankings and NBA playoff predictions will provide additional perspective on where all 30 teams stand during the 82-game season.

What does NBA stand for?

Sportsnaut will provide the latest NBA scores throughout the 2022 season, with NBA standings updated each day.

How many teams are in the NBA?

The Boston Celtics were originally founded in 1946, along with the New York Knicks, Philadelphia 76ers, and Atlanta Hawks. But the Detroit Pistons beat them all to the punch, being founded in 1941. The last team to join the Eastern Conference came via expansion, with the Toronto Raptors starting play in 1995.

The earliest teams in the Western Conference include the Sacramento Kings in 1923, Golden State Warriors in 1946, and the then-Minneapolis Lakers in 1947. The latest team to be added to both the Western Conference and the NBA, in general, is the New Orleans Pelicans, who are the latest NBA expansion team, being founded in 2002.

The NBA standings are broken down into six separate divisions, three each in the Eastern Conference and Western Conference. Each division has five teams.

How many games are left in the NBA season?

All 30 NBA teams play 82 regular-season games each season, with the NBA Play-In tournament and NBA Playoffs presenting additional opportunities to teams who qualify.

Who has the best record in NBA?

The 2021-22 NBA regular season concluded in April. The Phoenix Suns, at 64-18 finished with the best regular-season record in basketball. This clinched them the top seed in the Western Conference playoffs. The next-best record belonged to the 56-26 Memphis Grizzlies. The best record in the Eastern Conference belonged to the 53-29 Miami Heat, earning them the No. 1 seed in the East.

How many play-in teams are there in NBA?

During the past few years, the NBA has experimented with a play-in tournament. In 2022, this meant teams ranking 7-10 in both the Eastern Conference and Western Conference standings would have to earn their way into the playoffs.

The 7th-seeded team plays the 8th-seeded team, with the winner earning the 7th playoff seed, and the 9th-seeded team facing the 10th-seeded team. The winner of this second game plays the loser of the Seven-Eight game. Whoever wins this final contest earns the 8th seed in their respective conference.

All in all, eight teams from each conference make the playoffs, but teams earning the top six seeds are guaranteed a spot.

Once the playoffs begin, the seeding is easier to understand.

All games of the NBA playoffs are a best-of-seven series, with each team needing four wins to advance to the next round. It begins with the First Round, then the Conference Semifinals, then the Conference Finals, and finally the NBA Finals to determine the NBA Championship winner.

When are the NBA Finals?

The 2022 NBA Finals went to six games, and it ran from June 2 to June 13. This is a typical timeline for the NBA Finals, though the exact dates tend to fluctuate by a few days, if not weeks.

The date for the 2022 World Series will be released later this year. The MLB regular season concludes on Oct. 5 with the playoffs beginning two days later. The 2021 World Series started on October 21.

Shortly after the NBA Finals concludes, the NBA Draft begins, and shortly after that, NBA free agency begins. Below you can check out an overview of the 2023 NBA free-agent class.

The Golden State Warriors won the NBA Finals in 2022, defeating the Boston Celtics in six games. Stephen Curry won the first NBA Finals MVP of his career after averaging 31.2 points per game while hitting 41.8% of his three-point shots. It was their fourth NBA Championship since 2015. 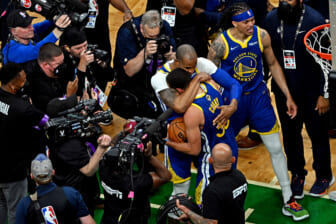