Bookmark. Save. Favorite. Do your thing. This is the one-stop-shop for everything NBA schedule-related heading into the 2021-22 season:

Related: Watch NBA on fuboTV with this FREE TRIAL

There is one NBA game today. Tuesday’s NBA playoff schedule features a Game 4 matchup between the Dallas Mavericks vs Golden State Warriors.

Tuesday’s Warriors vs Mavericks game is at 9 PM EST on TNT. The Maverick and Luka Doncic will be fighting for their playoff survival as Stephen Curry and Golden State role into a second straight game in Big-D with a 3-0 lead. The Warriors were victorious 109-100 in Game 3 despite Doncic’s 40-point performance.

Recapping Monday’s NBA playoffs action, the Boston Celtics responded in a significant way following a disappointing Game 3 setback by smashing their way to a 20-point victory with a final score of 102-82 in Game 4 of their best-of-seven series. The series is now tied at 2-2

NBA Daily Fantasy Picks for (May 24) 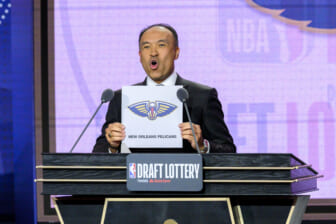 The latest possible end date for the 2022 NBA Finals is June 19. Less than a week after that, the Association will turn its attention to the offseason calendar with the 2022 NBA Draft on June 23.

This year’s iteration of the draft will be held at the Barclays Center in Brooklyn — home of the NBA’s Nets. Last year saw ABC handle the first round with ESPN taking over in the second round. We can expect much of the same once June comes calling.

Typically, NBA free agency starts in early July. Obviously, the COVID-19 pandemic and late start to the 2020-21 campaign changed this last year. But it seems like the NBA is right back at its regular schedule in 2022. Specific dates for when free agency starts will be determined at a later time.

There’s also this whole thing called blockbuster trades. They can be agreed to prior to the start of free agency, but won’t be finalized until free agency itself officially starts. This is important when it comes to the 2022 NBA Draft with multiple veterans potentially being on the trade block this summer.

Those looking for their fix of NBA games and to catch those who just recently entered the league via the draft can head to Las Vegas for the Summer League. It will be held July 7-17 at multiple locations off and near the Strip. Typically, NBA TV and ESPN broadcast the games throughout the 11-day event.

A short while after that, the 2022-23 NBA preseason schedule will get going some time in September. Dates have not been finalized in that regard. What we do know is that the Golden State Warriors and Washington Wizards will play two NBA games during the preseason in Japan. Said games will take place September 30 and October 2.

Multiple other cities will host preseason games, including Las Vegas and the Hawaii islands. Again, the 2022 NBA preseason slate has yet to be finalized. We’ll update this post once that happens.