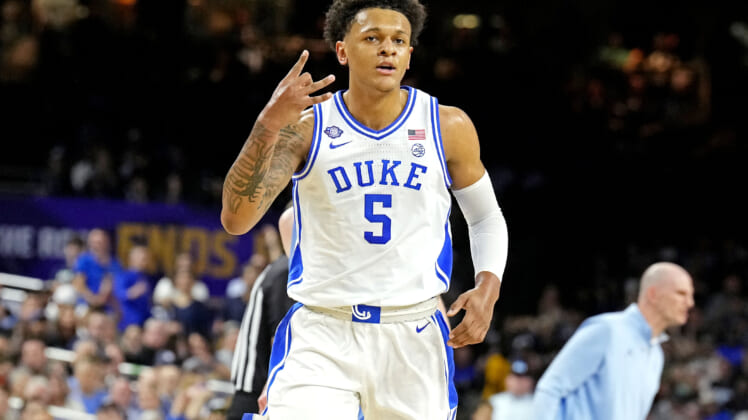 The 2023 NBA Rookie of the Year race is going to be interesting with the 2022 draft absolutely loaded at the top. The likes of Chet Holmgren, Paolo Banchero and Jabari Smith are seen as generational type talents.

A bit further down the totem pole, former Purdue star Jaden Ivey and high-scoring forward Keegan Murray from Iowa are going to make names for themselves.

Fresh off Scottie Barnes earning the 2022 NBA Rookie of the Year, we look at the 10 early candidates to come away with the top individual honor next year. This will be updated once the 2022 NBA Draft comes calling, throughout the summer and weekly during the 2022-23 season.

Verdict: Right now, we have Agbaji landing outside of the lottery. Depending on where he goes during the draft, we could be looking at a surprise ROY candidate.

Verdict: Pro-ready. That’s the best way to describe Liddell’s game. We’re expecting him to see a similar rise up the draft board as what happened with eventual 2022 NBA Rookie of the Year Scottie Barnes.

Verdict: Likely to be taken within the top-10 picks, Washington should get the usage necessary to make an immediate impact. It just depends on where he lands when it comes to earning NBA Rookie of the Year honors.

Verdict: Branham’s ability to compete for the NBA Rookie of the Year depends heavily on where he’s drafted. Right now, we have him at the bottom of Round 1 to a contending team.

Verdict: An ability to score in isolation has proven to be a huge bonus to Mathurin’s game. If he lands in the top 10, that’ll create the usage necessary to compete for the top rookie honors.

Verdict: Compared to Pascal Siakam by some, Murray’s game translates extremely well to the next level. That is to say, top-notch shooting and an above-average presence on defense.

Verdict: An improved mid-range and outside shooting game has Ivey skyrocketing up the board and as a likely top-five pick. His usage will dictate whether he’s a top-end NBA Rookie of the Year contender. But we’re banking on it.

Verdict: The only real question here is how well Holmgren’s 195-pound frame will hold up at the next level. Either way, we’re talking about a top-end talent here. There’s no question.

Verdict: Regardless of where Banchero lands, he’s going to be a top NBA Rookie of the Year candidate. This isn’t even up for debate.

Verdict: Smith is right there with Banchero and Holmgen as the three most-likely No. 1 picks in a top-heavy class. He’ll be a ROY candidate regardless of where he lands.