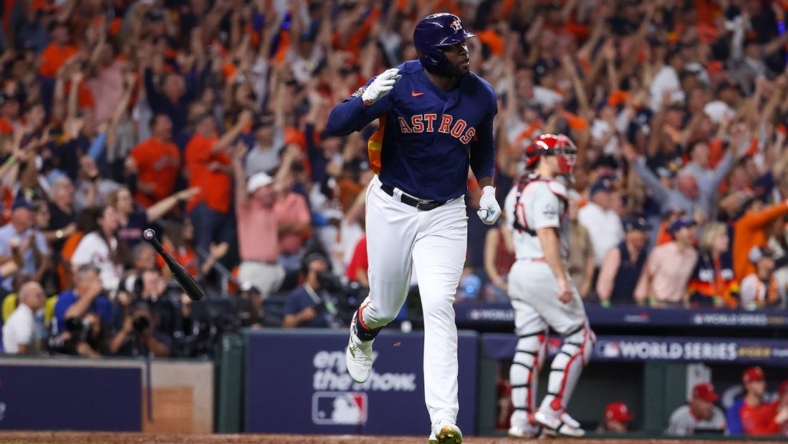 HOUSTON — Yordan Alvarez drilled a three-run home run to straightaway center field to support another strong effort from Framber Valdez as the Houston Astros defeated the Philadelphia Phillies 4-1 in Game 6 to claim their second World Series championship in six seasons.

Alvarez clubbed his third homer of the postseason in the sixth inning off Phillies left-hander Jose Alvarado, who was summoned from the bullpen to face the left-handed-hitting Alvarez.

Facing a 2-1 count, Alvarez drilled a 98.9 mile-per-hour sinker 450 feet over the batting eye in center to score Jose Altuve and Jeremy Pena and erase the 1-0 lead the Phillies grabbed in the top half of the sixth.

Valdez (3-0) carried a shutout into the seventh inning while recording nine strikeouts in Game 2. He was equally effective in his third start against the Phillies in 30 days, allowing two hits and two walks while again posting nine strikeouts. He fanned five consecutive batters bridging the third and fourth innings and retired 10 consecutive batters entering the top of the sixth inning.

At that point, Valdez had matched zeroes with Phillies starter Zack Wheeler, but Kyle Schwarber delivered Philadelphia its lone lead by driving a 2-2 sinker from Valdez into the right-field seats for his sixth home run of the postseason.

Wheeler (1-3) was exceptional before running into trouble in the sixth.

He had surrendered just three baserunners through five innings and faced just two batters over the minimum before plunking Martin Maldonado with a pitch to open the sixth. Pena followed with his second hit off Wheeler two batters later before Alvarado entered for Alvarez and the tide immediately turned.

Houston right-handers Hector Neris, Bryan Abreu and Ryan Pressly held the lead with aplomb, with Neris and Abreu retiring the Phillies in order in the seventh and eighth and Pressly needing only seven pitches to notch his sixth save of the postseason.

After bashing five home runs in their 7-0 win in Game 3, the Phillies tallied three runs over the final three games of the series.