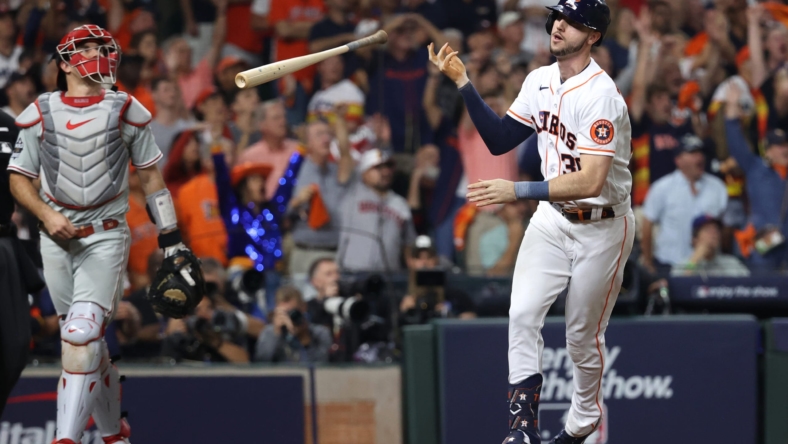 Game one of the World Series gave fans of America’s favorite pastime a show to remember. With the Houston Astros playing host to the Philadelphia Phillies at Minute Maid Park, both teams had no trouble scoring runs. Despite Kyle Tucker lighting the fuse for the ‘Stros early on, it was the Phillies who stood tall in the face of adversity to hang on for the win in extra innings.

Recapping the biggest winners and losers from the first night of the Fall Classic, we look back at the Phillies taking a 1-0 series lead before the set continues on Saturday.

Justin Verlander came into the game as one of only two pitchers (Roger Clemens) to have ever made a start in the World Series on three separate occasions. Even at 39 years old, Verlander got off to a great start. Unfortunately for the two-time Cy Young winner, that early success would be short-lived.

Verlander was able to get the first nine batters out with ease, needing just 36 pitches. But it became evident that he not only ran out of gas but also that Philadelphia’s hitters were starting to see his pitches a bit better, as Verlander needed 40 pitches to get his final three outs of the day. He ended up going five innings, allowing five runs and getting five strikeouts while walking two batters across 90 pitches.

With this latest start, Verlander now holds an 0-6 record with a 6.07 ERA in World Series games, which qualifies as the worst mark in MLB history. As great as Verlander’s career has gone, his bugaboos in World Series matchups will always be a footnote in what’s been an impressive baseball résumé.

In what was otherwise a day that lacked big plays from the Phillies, J.T. Realmuto came through in extra innings to power Philly to victory. In the top of the tenth inning, Realmuto connected on a pitch from Luis Garcia to push the Phillies forward for the win.

Realmuto’s solo home run ended up being the final run of the game, proving to be the deciding factor in Friday night’s series-opening battle. He’s the first catcher to have a home run in extra innings during the World Series since 1975, with Carlton Fisk being the last to do so.

Loser: Aaron Nola gets Philadelphia Phillies off to rough start

Aaron Nola had a phenomenal season for the Phillies. He not only led the NL in walks per nine innings (235 K/29 BB), he had an ERA of just 3.25. But Game 1 against the Astros just didn’t go well.

Nola lasted 4.1 innings, allowing five runs and the two home runs to Tucker. It was Nola’s fourth career postseason start after three appearances in last year’s playoffs. Nola didn’t do any worse than Verlander when all was said and done, but he sure didn’t help give his team any early momentum. He can only hope for another chance if the Phillies stay alive to take the mound again.

His team may not have gotten the win, but the biggest individual winner of the day goes to Houston’s Kyle Tucker. Not only did he score the first run of the day, he also drove in three more runs, connecting on two home runs to do his best to try and get his Astros to a 1-0 series lead on their home field before falling short.

Tucker has plenty of postseason experience, thanks to being a longtime Astro, but he’s never had a game like we witnessed on Friday night. Tucker came through with his first home across 30 World Series plate appearances. If the Astros go on to win the Fall Classic, Tucker’s two-home run, and four RBI performance would be hard to ignore for series MVP. But first, we’ll see how the rest of the games go.

The Astros and Phillies continue play on Saturday night at the same time, 8:05 PM ET, with Framber Valdez taking the mound for Houston and Zack Wheeler toeing the rubber for Philadelphia.

LAFB Network - UCLA Can’t Get It Done Against USC

LAFB Network - USC Victorious In The Battle Of LA: By The Numbers

Purple PTSD - The State of the Vikings: Week 12