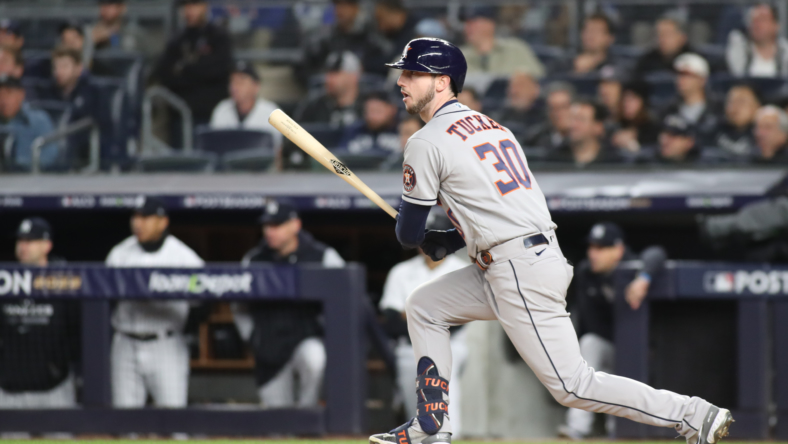 The 2022 World Series got started on Friday night, with the Philadelphia Phillies representing the National League and the Houston Astros for the American League. For those looking for early fireworks, it was Houston’s right fielder Kyle Tucker who got the scoring started.

Facing Philadelphia righty Aaron Nola, Tucker took a 1-1 pitch in the bottom of the second inning to right field, putting the ‘Stros up 1-0. It was Houston’s first hit of the night.

In classic form, Tucker even gave spectators an emphatic bat flip following the no-doubter. But he had good reason to.

Tucker’s home run came off a changeup, which was the first time an opponent has hit a home run off an Aaron Nola changeup since May, and just the third time a hitter has hit one out of the park all season.

This latest smack is Tucker’s second home run of the postseason, after also blasting a solo shot in Game 2 of their ALDS matchup with Seattle.

And you thought one home run was impressive. So did we. But Tucker made sure to permanently imprint his name in the minds of millions of spectators with his latest World Series appearance.

After becoming the first MLB player to touch home plate in the Fall Classic, Tucker hit a three-run blast in the bottom of the third inning, once again off Nola. Plus, bat flip No. 2.

For the Astros, the World Series is an effort to re-establish their reputation as legitimate MLB championship winners after many feel their effort deserves an asterisk after their 2017 title.

And for the Phillies, the last time they participated in the World Series came in 2009. It was just a year after winning the title in 2008.

While it hasn’t been that long since either team won a championship, it won’t diminish the levels of excitement for either fanbase should they emerge victorious.