What is the longest home run ever hit in MLB history? Major League Baseball’s introduction of StatCast tracking makes it easier than ever to determine the farthest home runs hit travel today. But even at a time when New York Yankees star Giancarlo Stanton and Aaron Judge are launching bombs, they do fall short of the longest HR in MLB history.

As you might expect, baseball legends are credited with the records. Babe Ruth, Mickey Mantle and Josh Gibson didn’t benefit from technology tracking how far they hit a baseball. But simple measurements, ballpark dimensions and first-hand accounts help us get a look at the longest MLB home runs since the game began.

Let’s dive into the best moonshots in MLB history and the longest home run ever.

2022 MLB season FAQ: Everything you need to know

Los Angeles Angels outfielder Mike Trout hit the longest home run in 2022. The three-time AL MVP stepped to the plate against the Texas Rangers, working a 3-1 count. In a flash, the 30-year-old crushed the farthest home run in MLB this season with a 472-foot missile off Dane Dunning.

Here are the farthest home runs hit in MLB this year with video links attached in the distance.

Even in an era where pitchers are throwing harder than ever and hitters are making louder contact, we rarely see 500-foot home runs. The longest blast in the StatCast era came in 2005, when Nomar Mazara hit a 505-foot cannon. Giancarlo Stanton is the second only player since 2015 to hit one 500-plus feet.

Meet Oklahoma State first baseman Griffin Doersching. The college star stepped to the plate with his team trailing 6-4 in the 7th inning, drilling an unbelievable blast that was measured at 513 feet. While it’s possible Oklahoma State gave a favorable measurement, the 513-foot homer would easily be the farthest home run in 2022 at any level of baseball.

It should come as no surprise that the record books for the longest home run ever in baseball history are spotty. MLB history offers reports of truly epic blasts, which we’ll dive into below. But the farthest home run ever documented happened in a Triple-A baseball game.

On June 2, 1987, the Denver Zephyrs hosted the Buffalo Bisons at Mile High Stadium. Aided by the thin air, much like baseballs hit out of Coors Field today, Joey Meyer launched a towering blasted that traveled an absurd 582 feet and is the longest homer ever caught on video.

Meyer technically holds the verifiable record for the deepest home run ever hit, but a look at MLB’s record books and archives points us to some Hall of Famers delivering epic moments that we never got to witness.

Look up the farthest home run ever hit and you’ll see New York Yankees legends Mickey Mantle and Babe Ruth mentioned. The numbers are truly staggering, with Mantle credited for a 734 foot home run at Yankee Stadium in 1963 and a 656-foot blast that is rumored when he was a 19-year-old in an exhibition match against USC. But those claims are disputed by some who took part in the game. 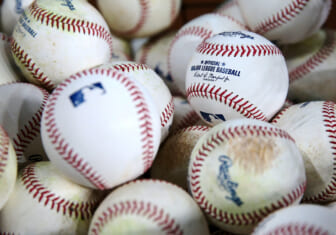 Below, we’ll look at some of the longest home runs hit in MLB history, both documented and rumored.

Stanton is the best power hitter in MLB today, there’s no question about it. Both in terms of average home run distance and max exit velocity, he crushes baseballs like no one else in the sport. What is the longest home run ever hit by Giancarlo Stanton? It came with the Miami Marlins in 2016, fittingly at Coors Field.

If MLB makes changes to the baseballs and rules are adjusted that favors hitters more, maybe Stanton tops this mark in 2022. Health will also be a factor. One thing is for certain, Stanton is fully capable of adding another historic milestone to the list of the longest home runs ever.

Nomar Mazara, once one of the top prospects in MLB, hasn’t quite lived up to the hype. Released by the Detroit Tigers in July, Mazara’s chances of becoming an impact MLB player might be over. But everything came together on June 21, 2018 when Mazara sent a Reynaldo Lopez fastball towering into the bleachers. At 505 feet, it’s the longest home run ever in the StatCast era.

Glenallen Hill isn’t one of the most prominent names from our examination of the furthest home runs hit in MLB history. He never appeared in an All-Star Game from 1989-2001 and he never hit more than 28 homers in a single season. But in May 2000, Chicago’s outfielder delivered a blast that no fan watching it ever forgot. It landed on the rooftop across the street from Wrigley Field and estimates suggest it traveled around 500 feet. Hill thinks it cracked 700 feet, in-depth investigations suggest it likely exceed 500 but we’ll never know for sure. Even a conservative estimate of 500-520 feet makes it a candidate for the longest home run ever.

The definition of a frozen rope Jim Thome’s dinger on July 3, 1999, is one to remember. In the second game of a doubleheader, Thomas took a 3-1 pitch and sent it towering to left-center and it didn’t stay in the stadium long. After bouncing once on the concourse, it fell onto the street as a souvenir that holds a place in MLB history.

Adam Dunn hit 462 home runs in his career, earning a reputation as one of the best home-run threats during his era. On Aug. 10, 2004, in a matchup against the Los Angeles Dodgers, Dunn delivered a moment he’ll never forget. In what remains the longest home run ever at Great American Ball Park, the baseball rocketed out and finished with an estimated distance of 535 feet.

Willie Stargel is among the Hall of Famers who are also recognized as one of the best power hitters in MLB history. The Pittsburgh Pirates legend finished with 475 home runs, but it was a 535-foot blast at Olympic Stadium that lands on our list. On May 20, 1978, Stargel hit the farthest home run ever recorded in Canada with his eye-popping blast in Montreal’s Olympic Stadium. Keep in mind, he was 38 years old when he hit it and that arguably makes it even more impressive than others above him.

There’s no doubt who hit the farthest home run in MLB All-Star Game history. In the 1971 Midsummer Classic, slugger Reggie Jackson sent Dock Ellis’ pitch practically out of Tiger Stadium, with the ball bouncing off the roof as everyone in attendance just sat back in shock. The ESPN Home Run Tracker listed it at 539 feet, one of the longest homers hit in the recorded era.

Unsurprisingly, what many believe to be among the farthest home runs hit ever are based on first-hand accounts. On April 17, 1953, Hall of Famer Mickey Mantle was credited with a tape-measure blast that traveled 565 feet, per Yankees publicist Red Patterson. It’s officially recognized by the Baseball Hall of Fame. What makes it more incredible, Mantle hit the blast with a teammate’s bat

The legend of Babe Ruth is bigger than some of the deepest bombs he hit during an iconic career. The Sultan of Swat gets credited for all kinds of records and moments that live in MLB history. Among them, a towering blast on April 3, 1919, with a plaque that credits him for a 587-foot home run. He said it was the longest home run he ever hit, clearly squashing any tales of 600-foot blasts.But historians believe the ball traveled 552 feet. Still, not bad for the King of Crash.

Josh Gibson, perhaps the greatest power hitter in MLB history, is a baseball legend. The best player in the Negro League, Gibson is credited with a 580-foot home run at Yankee Stadium in 1967. Naturally, no video evidence was recorded, but the ball hit just two feet shy of the top of the facade at old Yankee Stadium. Many believe if Negro League records as a ‘major league’, which didn’t happen until 2020, Gibson’s blast would be more widely viewed as the longest home run ever.

What was the longest home run of 2021 MLB season?

During the 2021 MLB season, we didn’t see any of the deepest homers approach the record for the longest home run ever hit. But some familiar sluggers, including some teammates, deliver huge blasts that left everyone in the stadiums just admiring the baseball as it flew out.

It’s been a turbulent career for Minnesota Twins slugger Miguel Sanó. An All-Star selection in 2017, Minnesota’s 6-foot-4 masher is more than capable of hitting one of the longest home runs ever. In August against the Boston Red Sox, Sanó uncorked a 495-foot cannon deep into the night at Fenway Park. We can only imagine how far the ball would have traveled if this moment happened at Coors Field.

Here are the deepest home runs hit from the 2021 MLB season, with videos from MLB.com.

It comes as no surprise that of the 10 farthest home runs hit, five happened at Coors Field. It’s the most hitter-friendly MLB park thanks to the thin air helping make baseballs fly out of the stadium. Interestingly, Braves’ outfielders account for four of the longest MLB home runs in 2021.

Interestingly, the hardest baseball hit in 2021 didn’t even leave the infield. New York Yankees outfielder Giancarlo Stanton lined a ball off the bat at 122.2 mph this season, but it went directly into the second baseman’s glove and was turned into a double play.

Looking ahead to 2022, MLB free agency is something to keep in mind. If a slugger like Jorge Soler signs with the Colorado Rockies, we’ve seen him crush baseballs out of the yard. So, maybe we see one of the longest home runs ever this upcoming season.