What is the fastest pitch ever? Fastest MLB pitches in 2022, Ben Joyce hits 105.5 mph in college 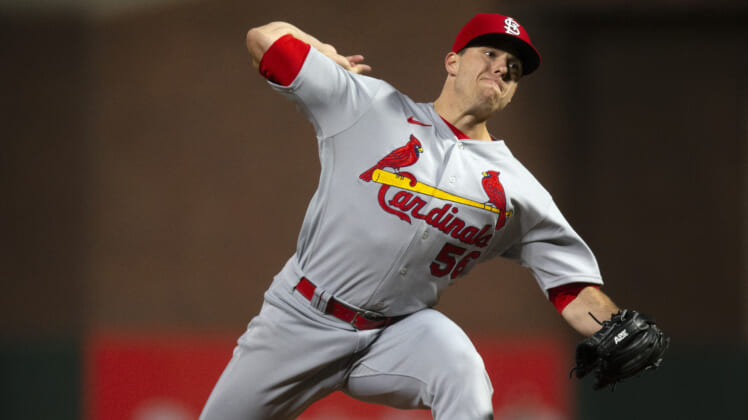 What is the fastest pitch in MLB? New York Yankees closer Aroldis Chapman can light up the radar gun like few others, while New York Mets ace Jacob deGrom throws heat that no starting pitcher can match. But how do these flamethrowers stack up in MLB history.

There are few things more impressive in sports than witnessing a pitcher light up the radar gun. The ability to load up and fire a ball at 100-plus mph gets fans excited, makes hitters feel intimidated and leaves teams fantasizing about the possibilities of what that electric arm can do.

Let’s examine the fastest pitch ever, in 2021 and look at the all-time history.

Technology plays an instrumental role in the rapid velocity of fastballs and the tracking speed. Major League Baseball implemented the PITCH/FX system in 2006, allowing it to more accurately track the movement and speed of pitches, and the software kept improving over the years.

While many MLB statistics date back to the 1900s, data specific to movement and speed only comes from modern technology. As a result, Aroldis Chapman is credited with throwing the fastest pitch in MLB history.

On Sept. 24, 2010, Chapman made MLB history. Then a rookie relief pitcher for the Cincinnati Reds, the fireballer unleashed a fastball clocked at 105.1 mph by PITCH/fx. MLB later bumped that up to 105.8 mph.

Chapman did it again the following year, a wild pitch that nearly hit All-Star outfielder Andrew McCutchen in the face.

History repeated itself a few years later, this time with the Yankees. Closing the game in the 9th inning, Chapman unleashed a 105.1 mph fastball against the Baltimore Orioles.

Aroldis Chapman’s fastball is widely regarded as the fastest pitch in MLB today. In fact, even after more than 575 career innings and countless pitches hitting 100-plus mph, he also holds the title this season.

With technology becoming a greater resource for pitchers and more emphasis being placed on velocity, we are seeing players throwing harder than ever. As the graph below shows from Jeff Leach, the average fastball speed in MLB has skyrocketed since 2002 and it will likely exceed 95 mph next season.

For examples on this, we examine the fastest pitch from the 2021 MLB season, by each pitch type.

The easy pick would be Chapman who has thrown some of the fastest pitchers in MLB history. However, the Yankees’ closer just turned 34 and it’s possible injuries in recent years led to diminished velocity. So, I’ll be keeping an eye on Emmanuel Clase to light up the radar gun. 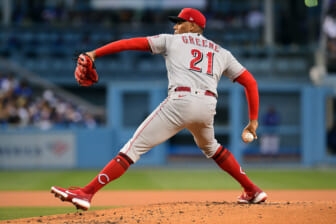 Another favor is Cincinnati Reds pitcher Hunter Greene. he made the team’s Opening Day rotation and that means we’ll get to see a lot of him. He touched 100-plus MPH multiple times in spring training and he hit 104 mph at one point in Triple-A during the 2021 MiLB season. Keep an eye on him, he might just throw the fastest pitch in MLB this year.

Greene has already made history, a feat even more meaningful for the rookie because it happened in his hometown of Los Angeles. The 22-year-old righty faced the Los Angeles Dodgers on April 16 and set the MLB record (pitch-tracking era) with 39 pitches thrown at 100-plus miles per hour. He shattered the record set by Jacob deGrom, who threw 33 pitches at 100-plus mph on June 5, 2021.

Minnesota Twins rookie reliever Jhoan Duran threw the fastest pitch in MLB in 2022. On May 14 against the Cleveland Guardians, he just missed the top of the zone with a 103.3 mph fastball.

Here are the fastest pitches thrown thus far in 2022. We’ll update the tracker, velocity via Baseball Savant, every few weeks.

Check out a breakdown on the fastest pitch in 2021 further below.

Amid the MLB lockout, college baseball is becoming increasingly popular and it couldn’t happen at a better time. One of the fastest pitches ever thrown in baseball history is at the college level. Tennessee Volunteers right-handed pitcher is unleashing gas against opponents, routinely hitting triple digits and touching 103 mph multiple times.

Incredibly, Joyce is doing this after missing the 2021 season following Tommy John surgery. Pitchers are normally returning with diminished velocity post-TJS, needing time to work their way back up to peak velo. Yet, Joyce makes 100-mph look easy. Needless to say, he’ll be on the radar of MLB scouts and Aroldis Chapman might have a challenger for the fastest pitch ever in a few years.

Ben Joyce threw the fastest pitch in baseball in 2022, factoring in both the MLB and collegiate level. Facing the Auburn Tigers, Tennessee’s right-handed pitcher clocked a 105.5 mph fastball for a strike. Incredibly, per Wes Rucker, Joyce has thrown eight pitches at 103 mph or more this year.

When will Ben Joyce be drafted?

While Ben Joyce is throwing one of the fastest pitches ever, it doesn’t guarantee him a bright future in the majors. In MLB Pipeline’s ranking of the best players available in the 2022 MLB Draft, Joyce ranks 125th. There is a history of elbow and shoulder injuries that cause major concerns. He also isn’t used a lot out of the bullpen and is largely a fastball-only pitcher. Realistically, he might be a third-round pick in July.

St. Louis Cardinals relief pitcher Jordan Hicks, the only other active player to hit 105 with his fastball, is on the injured list. As a result, Chapman has faced little competition to retain his crown for the fastest pitch in 2021.

deGrom likely won’t surpass Chapman’s fastball this season, but the front runner for NL MVP and Cy Young is blowing past his peers for average velocity.

With deGrom sidelined indefinitely due to inflammation in his throwing arm, baseball fans must look elsewhere for arms throwing with serious gas. Fortunately, there’s no shortage of that as our quick look at the fastest throwing pitchers in MLB shows.

With the 2021 MLB season wrapped up, here are a few hurlers to keep an eye on in 2022 who could top the chart for fastest pitch in MLB next year.

Let’s compare the data to reports and stories that predated modern tracking technology.

Nolan Ryan and the history of velocity

Fastball velocities have ticked up over time. Between pitchers tweaking their mechanics and throwing with greater effort thanks to lower pitch counts, the radar gun is hitting triple digits like never before. FanGraphs detailed in Apri how the average fastball velocity jumped from 91.7 mph in 2008 to 93.7 mph this season.

The measurement of fastball velocity has also changed in recent decades, as Baseball America explained in detail. MLB changed the point at which it tracked the baseball coming in. With a pitch losing velocity as it leaves a pitcher’s hand and gets closer to the plate, the specific moment the baseball is clocked matters.

It’s why Nolan Ryan isn’t officially credited for throwing the fastest pitch. When the Hall of Famer was unleashing heat from 1966-1993, his fastball was being tracked closer to the plate. He was still credited with hitting 100 mph multiple times, topping out at 100.9 mph.

The documentary Fastball examined velocities and how different speeds might look if modern technology was used. It ultimately suggested Ryan hit 108mph. But Pitching Ninja later broke down why it’s difficult to determine the accuracy of that suggestion and he compared Ryan’s fastest recorded pitch to Hicks and Chapman frame-by-frame.

We might begin to see teams place less emphasis on velocity. MLB could explore rules to reduce the number of pitchers allowed on a roster, resulting in starters going longer into games and thus using less max effort on individual pitches. With that said, there will still be plenty of arms who will blow past 100 mph.

There is a chance Chapman’s record could fall in the near future. Cincinnati Reds prospect Hunter Greene, one of the top pitching prospects in MLB, regularly throws triple-digits and has even hit 105 mph. Keep an eye on him as the next possible challenger to Chapman’s official record.