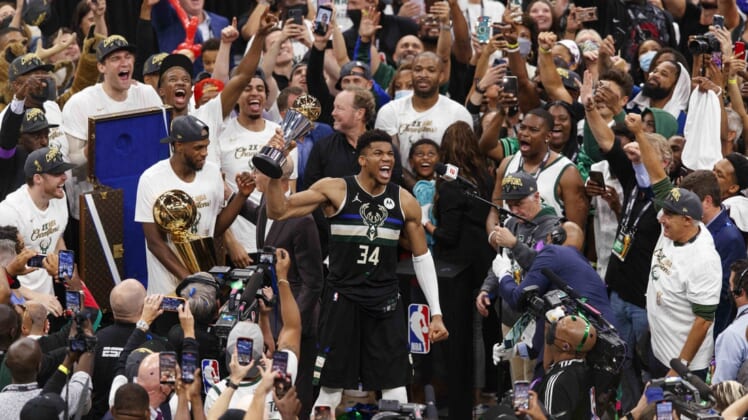 Call him Robin, or Batman, but make sure to call Giannis Antetokounmpo champion.

Antetokounmpo scored 50 points to carry the Milwaukee Bucks to the 2021 NBA title. With the big man’s longtime sidekick, Khris Middleton, standing tall in clutch moments, the franchise captured the Larry O’Brien Trophy for the first time since 1971.

“There was a job that had to be finished. The bubble, I feel like, give the Miami Heat credit, but the bubble didn’t do us justice,” Antetokounmpo said of the 2020 playoffs near Orlando. “Coming back, I was like — this is my city. They believe in me. They believe in us. I want to get the job done.

“That’s my stubborn side. It’s easy to go to a super team and win a championship, play my part. It’s easy. But this is my team. We did it.” 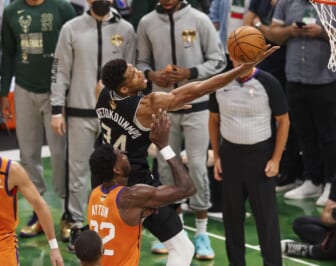 The 26-year-old Greek star began last season facing public doubt about whether he would stay with a small-market franchise. Antetokounmpo ignored the outside input, signed a long-term deal and committed to building a “championship culture” with the Bucks.

On Tuesday night, he received the Bill Russell NBA Finals MVP award after averaging 35.2 points and 13.2 rebounds against Phoenix. He had 33 points in the second half of Game 6 and wound up with his third 40-plus-point game in the series as the Bucks sealed it with a 105-98 victory.

“Just believe. I hope I give people around the world — from Africa, from Europe — hope. I’m a champion,” Antetokounmpo said in a teary press conference thanking his mother for instilling a stubborn work ethic and never pressuring him to swerve away from basketball. “I hope this can give everybody around the world hope (to) believe in your dreams.”

Middleton made two free throws with 44.7 seconds left to give the Bucks a 104-96 advantage. On the previous possession, moving to his right from the top of the key, Middleton took a handoff from Antetokounmpo at full stride, rose up and knocked down a clutch jumper with 56.9 seconds left, putting Milwaukee up 102-96.

“He played amazing for us, he led us when I was down,” Antetokounmpo said. “Once we are done enjoying this, we’ve got to get back to work. Build off this. Hopefully we can do it again.”

Middleton acknowledged that both players are stubborn, which serves them to step up when a personal challenge from a teammate is on the table.

“I don’t care about what other people say. At the end of the day, we knew what we needed to do in this locker room,” Middleton said. “We challenge each other every day. To be better leaders. Be better teammates.”

The final minute was a microcosm of Antetokounmpo and Middleton’s relationship, head coach Mike Budenholzer pointed out. Even with Antetokounmpo carrying the offense with nearly half of its total production in Game 6, Middleton landed the finishing blows, much as he did in leading the Bucks back from a nine-point deficit in the fourth quarter of Game 4.

“I saw a team that has a lot of experience in playoff situations,” Suns coach Monty Williams said. “Because they’ve been in those moments before, it made up the margins for them.”

Antetokounmpo opened the third quarter in bulldog mode, pouring in 12 points in the first 4:30 and tallying 20 in the frame. He showed little interest in sharing in a successive and fruitful run of isolation sets from the top of the key.

“That’s what I had to do tonight. I had to do a little bit of everything,” Antetokounmpo said.

The Suns went to the bench when Deandre Ayton picked up his fourth foul but found no counter. Mikal Bridges and Frank Kaminsky were fruitless when Antetokounmpo was on the attack at close range.

Suns point guard Chris Paul was harassed into a pair of critical turnovers and couldn’t find space to set his feet for the mid-range daggers that were available earlier in the game with the Bucks adjusting defensively in the fourth quarter to assign the 6-foot-11 Antetokounmpo to check CP3. Bobby Portis joined the rotation, and the matchups kept Paul off-balance.

Paul still managed to score 26 points on 11-of-19 shooting while adding five assists.

Milwaukee had 50 points in the paint, continuing a theme of dominance in the series.

Turnovers threatened to choke the Bucks, but the Suns were unable to capitalize, producing just 16 points off of 19 Milwaukee giveaways. The Bucks were able to salvage points at the foul line, going 25 of 29. Phoenix was 16 of 19 on free throws.

“It’s my first time doing it — this kind of hurt as a head coach,” Williams said through a cracking voice, fighting back emotion. “When you go through something like this for the first time, you don’t expect to get this far.

“What a huge accomplishment by our players. … We got all the way to the Finals. That hasn’t been lost in my thinking. It’s just the pain that goes with your season being over.”

Playing in his first Finals, Paul, 36, was down about the Suns dropping four games in a row after taking a 2-0 lead in the best-of-seven series.

“Everybody in that locker room knows we had enough, but it wasn’t enough. So, we got to figure it out,” Paul said. “I think for me I just look at myself and figure out how can I get better, what I could have done more and make sure I come back next season ready to do it again.”

Paul just completed his 16th season on a third playoff team in three years. He has a player option in his contract for 2022, which represents the lone pressing financial matter for Phoenix.

Cameron Payne, who scored 10 points in the first half with the Suns scuffling before going scoreless after halftime, is an unrestricted free agent.

For the Bucks, Budenholzer’s return would seem to be a cinch with a title in hand. Only P.J. Tucker, acquired from the Houston Rockets at the trade deadline, is unsigned for next season among Milwaukee’s regulars.