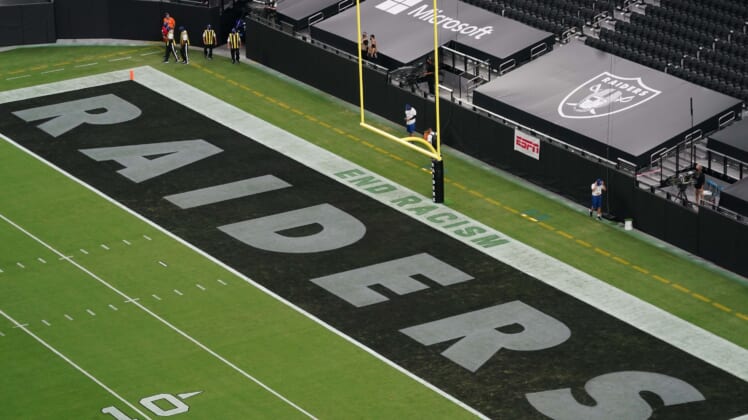 Sep 21, 2020; Paradise, Nevada, USA; General view of an end zone with the message “End Racism” written in it before a NFL game between the New Orleans Saints and Las Vegas Raiders at Allegiant Stadium. Mandatory Credit: Kirby Lee-USA TODAY Sports

Interest in the Raiders’ first ever game at Allegiant Stadium in Las Vegas against the New Orleans Saints Monday night was incredibly high around the United States.

In fact, Week 2 of “Monday Night Football” on ESPN and ABC was up 26% from a season ago. Locally in Las Vegas, ratings also reached historical levels.

“Locally, Las Vegas scored its highest local rating for a MNF game in a decade, delivering a 22.1 local rating,” the Raiders announced, via their official website.

Fans in the desert metropolis being interested in Raiders football is no surprise. However, that 22.1 local rating is absolutely huge compared to the 2.70 rating nationally on ESPN’s broadcast of the Raiders-Saints game.

Overall, ratings around the NFL world for Week 2 were better than what we saw during the opening week. In fact, the Raiders-Saints Monday night game drew almost as many viewers as the opening doubleheader on ESPN the week prior. Meanwhile, the Browns-Bengals “Thursday Night Football” game was up from the same time slot last season.

There’s certainly a trend going in the right direction for the NFL after initial concerns that the ongoing national anthem protests would continue to impact ratings.

Related: NFL to take a stand against President Trump?

This was magnified by the fact that the season opener between the defending champion Kansas City Chiefs and Houston Texans on “Thursday Night Football” saw a dramatic decrease in viewership compared to last season.

It’s also important to note that the NFL continues to be the top dog in ratings when it comes to the sports world. That’s especially true when looking at the ratings for the NBA Playoffs in Orlando.

Typically, NFL ratings during a presidential election cycle will go down some. We saw this back in 2016 when the NFL went up directly against debates between President Trump and Hillary Clinton.

The final two debates between Trump and challenger Joe Biden (D) will go up directly against “Thursday Night Football.”

Ratings for those two games should tell us a story.