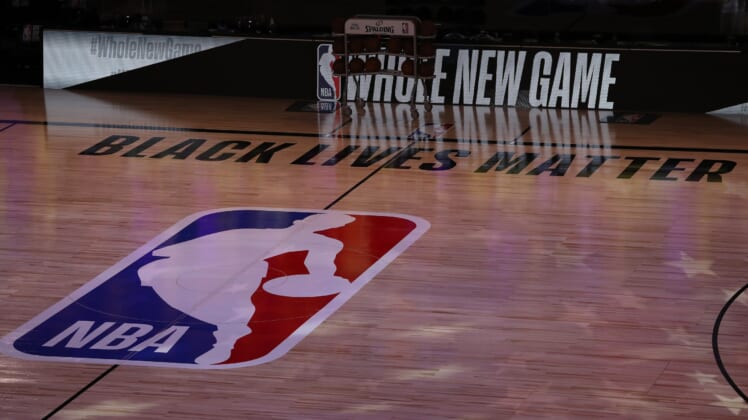 July 30, 2020; Lake Buena Vista, USA; A general view the court with Black Lives Matter written above the NBA logo is seen at center court prior to the game between the LA Clippers and the Los Angeles Lakers at The Arena at ESPN Wide World Of Sports Complex. Mandatory Credit: Mike Ehrmann/Pool Photo via USA TODAY Sports

There’s been a lot of talk surrounding NFL ratings at the early stage of the 2020 season. A lot of that has to do with the political divide surrounding the ongoing national anthem protests.

After some initial bad news for the NFL, it seems like television ratings are starting to bounce back some. The same thing can’t be said for the NBA Playoffs. They continue to take a major hit after the 2019-20 season resumed at Walt Disney World in Orlando in late July.

These are some absolutely stunning numbers right there. They are also pretty darn alarming for the Association given that Los Angeles is the second-largest media market in North America and is headlined by LeBron James. Game 2 of the Lakers series against Denver also saw Anthony Davis hit a game-winning three-pointer at the buzzer to give the Lakers a 2-0 series lead.

Ratings for the Fox broadcast of the Dallas Cowboys’ comeback win over the Atlanta Falcons Sunday afternoon were up 6% from the same time slot a season ago. Meanwhile, the above-mentioned Seahawks-Patriots game saw a dramatic decrease from “Sunday Night Football” Week 1.

This all comes on the heels of the Week 2 “Thursday Night Football” game between the Cleveland Browns and Cincinnati Bengals seeing an increase from the same time slot last season.

Did NBA boycott play a role in TV ratings decrease?

By now, it’s well known that the NBA and its teams took part in a boycott during the early stages of the playoffs. Games were canceled for multiple days after Jacob Blake was shot in the back seven times by a Kenosha police officer in Wisconsin in August.

After some initial debates behind the scenes, teams around the NBA decided to boycott in protest. For some sports fans, that represented a bad look. There’s something to be said about the sports world acting as an outlet during trying times such as these, primarily the COVID-19 pandemic.

This will obviously be a major backstory should the Lakers earn their first NBA Finals appearance in a decade. The very same year that saw Kobe Bryant tragically pass away culminating in the Lakers attempting to win that title for their fallen legend.

Interest in said Finals would normally be at a near all-time high. If that is not the case, NBA Commissioner Adam Silver and Co. will have a lot to worry about heading into an uncertain offseason.