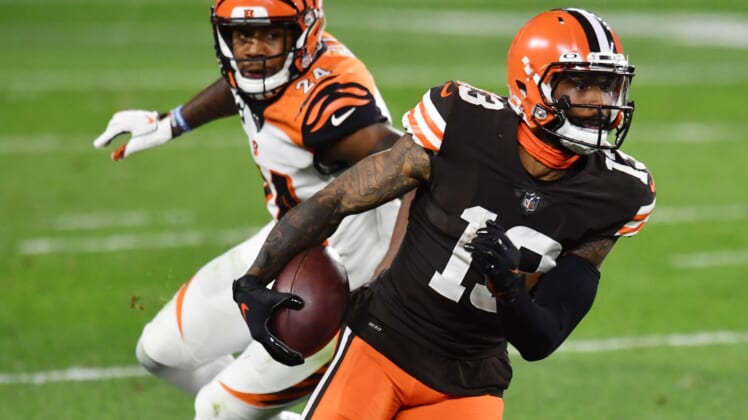 The NFL took a massive ratings hit in Week 1 of the 2020 season amid player protests. Hoping for things to turn around in Week 2 on Thursday Night Football, the NFL saw mixed results in its viewership.

A clash between the Cleveland Browns and Cincinnati Bengals was entertaining until the end and many fans seemed to enjoy it. While the NFL saw a slight uptick in viewers, the league likely won’t come out of Thursday night with renewed confidence for a variety of reasons.

Before the NFL season began, Dallas Cowboys owner Jerry Jones expressed concern regarding how fans would react to league-wide demonstrations to raise awareness for police brutality and systemic issues in the United States.

Players protesting during the national anthem and standing together in solidarity before games clearly struck a chord with many fans.

According to ShowBuzzDaily, the Bengals-Browns game drew 6.67 million viewers to kick off Week 2. It’s a slight improvement upon the 6.64 million viewers the NFL saw for its Week 2 TNF game in 2019, per SportsMediaWatch.com.

However, that TNF game competed against the Democratic primary debate and it was still the least-watched TNF opener since 2011. Of course, it didn’t have to compete for sports fans with the NBA and NHL in 2019.

The NFL was already facing a massive revenue hit this season due to the COVID-19 pandemic with stadium attendance significantly reduced and, in many cases, barred. As a result, the league would be dependent on record ratings, which it enjoyed during the 2020 NFL Draft.

The NFL experienced a dramatic change this offseason regarding its views towards player protests and racial inequality in the United States. One of the most prominent moments came in June, when New Orleans Saints quarterback Drew Brees pushed back against President Donald Trump and defended players’ rights to kneel during the anthem.

As the NFL became more open to players demonstrating during the national anthem before games, Trump fired back at the league. He vowed to boycott the NFL this season if players kneeled and later said he would be happy if games weren’t played.

With the NFL’s television ratings dropping, President Trump recently took another shot at the league and blasted it for “disrespecting our great American Flag or Anthem.”

While the NFL hasn’t directly responded to Trump, the league reportedly came into the season prepared to stand up to him. However, Goodell largely seems focused on maintaining order and play amid the COVID-19 pandemic.

After years of Colin Kaepernick seemingly being kept out of the NFL, Goodell seemed to admit the league handled the situation poorly.

The NFL’s commissioner expressed support for the Black Lives Matter movement and protestors this summer. He later admitted the NFL should have listened to Kaepernick earlier regarding his original message about racial inequality and police brutality in the United States.

Goodell wasn’t the only voice in the NFL to speak out. Jerry Jones called for reform in the country and Baltimore Ravens head coach John Harbaugh explained how those who are protesting want the country to be great.

We saw the NFL pledge $250 million to combat systemic racism in the United States and teams have also stepped up. The Pittsburgh Steelers held a banner in protest during the national anthem. The Minnesota Vikings honored George Floyd’s family before the team’s opener and donated $5 million towards social justice support.

Ultimately, money matters most to team owners. There was already growing speculation about Goodell’s successor and that may intensify with the NFL set to lose billions of dollars. The league may eventually choose to reduce the number of demonstrations before the game, instead doing more work behind the scenes, with the hopes that ratings will spike up again.