NFL: Players protest across the league in empty stadiums 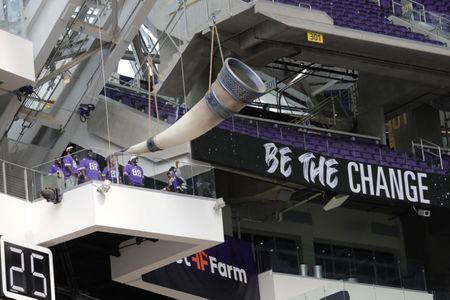 (Reuters) – National Football League players staged pregame protests from coast-to-coast on Sunday, taking a knee during the playing of the U.S. national anthem in mostly empty stadiums, avoiding the embarrassment of having fans boo, which overshadowed the season opener.

The Jacksonville Jaguars were the only team hosting a Week One game allowing fans on Sunday, so there were no repeats of Thursday’s scenes at Kansas City’s Arrowhead Stadium when members of the Super Bowl champion Kansas City Chiefs and the Houston Texans were booed during a moment of silence for social justice.

The Jaguars took no chances and like several teams remained in the locker room during the singing of “Lift Every Voice and Sing,” often called the Black national anthem, and the “Star-Spangled Banner.”

“Our solidarity is stronger than any difference that threatens to divide us,” the Jaguars said in a statement issued prior to kickoff. “We are a united team.

“We understand that not everyone will agree with our position and demonstration, however we hope that all will seek to understand the reason for it. We all want the same thing: equality and justice.”

Their opponents, the Indianapolis Colts, were on the sidelines, however, where head coach Frank Reich stepped forward and knelt during the national anthem as players locked arms behind him.

“Our intent is to bring attention to the issue of systemic racism,” the Colts said in a lengthy statement. “To be clear – we were not protesting the flag, the anthem, or the men and women who wear the uniform.

“The timing of this action is meant to highlight that the presence, power, and oppression of racism remains inconsistent with the unity and freedoms of what it means to be an American.”

Players took to the field following a period during which social justice issues rose to the fore, triggered by the killing of George Floyd, a Black man, in police custody in Minneapolis, and the police shooting of another Black man, Jacob Blake, in Kenosha, Wisconsin.

The NFL, which for years had been locked in debate with players over kneeling protests, changed course in June when it said the league made mistakes in not listening to its players on the issue.

President Donald Trump has been a vocal critic of players kneeling during the anthem, saying previously it was “disrespecting” the country and the flag.

The Green Bay Packers and Minnesota Vikings, who represent the two states where the Blake and Floyd events occurred, met in Week One in Minneapolis.

The Packers remained in the locker room during the pregame anthems, while several members of the Vikings took a knee.

In Atlanta, the Falcons, who paid tribute to late civil rights leader John Lewis by naming him honorary captain for their season opener, kicked off to the Seattle Seahawks, with both teams then taking a knee.

Four years ago, San Francisco 49ers’ quarterback Colin Kaepernick sparked controversy and helped inspire the Black Lives Matter movement by kneeling during the playing of the national anthem to put a spotlight on police brutality.

Kaepernick, who has gone unsigned since the 2016 season and filed a collusion grievance against NFL owners in 2017, took to Twitter on Sunday to dismiss the league’s newfound interest in social justice as nothing more than propaganda, pointing to former 49ers teammate Eric Reid.

A Pro Bowl safety with the 49ers, Reid was among the first players to join Kaepernick’s protest and after being released by San Francisco remained unsigned until joining the Carolina Panthers in 2018.

After two standout seasons in Carolina, Reid was let go by the Panthers earlier this year.

“While the NFL runs propaganda about how they care about Black Life, they are still actively blackballing Eric Reid (@E_Reid35) for fighting for the Black community. Eric set 2 franchise records last year, and is one of the best defensive players in the league,” tweeted Kaepernick.

(Reporting by Steve Keating in Toronto; Editing by Christian Radnedge and Peter Cooney)