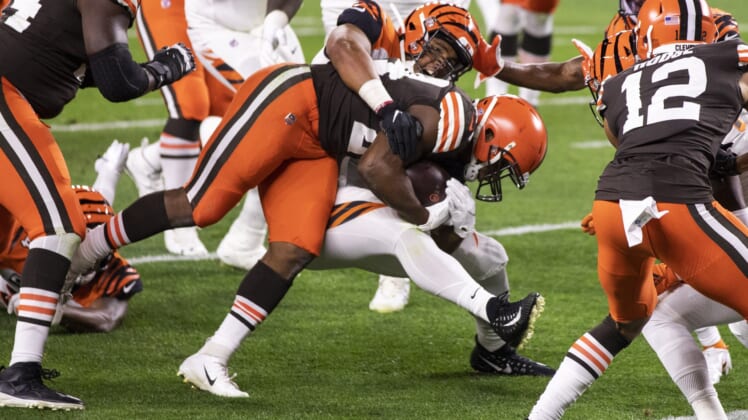 When the Cincinnati Bengals and Cleveland Browns took the field for a Week 2 Thursday Night Football clash between two winless teams, many expected the game to be a snoozer. Instead, it was a thrilling duel between offenses led by former No. 1 overall picks on a big stage in a game filled with explosive plays.

After having one of the worst quarterback performances in Week 1, Baker Mayfield responded with a gem in Week 2. Facing a much easier opponent, Cleveland’s offense rolled early on Thursday with big plays from Nick Chubb, Odell Beckham Jr. and Mayfield. By halftime, the Browns jumped out to a 21-13 lead.

Not to be outdone, Cincinnati’s offense impressed with Joe Burrow shining and star running back Joe Mixon exploding in the first half. At one point trailing 28-13 in the third quarter, the Bengals tried clawing their way back. Ultimately, it wasn’t enough against a superior team.

Let’s take a look at the winners and losers from the Browns’ thrilling 35-30 win over the Bengals on Thursday Night Football.

Once Cleveland found itself too far behind in Week 1, that was a wrap on Chubb’s chances of making an impact. When the game is close and the Browns need to punish their opponent, they know this 227-pound running back is precisely who they want to feed. It was obvious on Thursday night.

Against Cincinnati’s defense, Chubb looked like a bulldozer plowing through construction cones. The Bengals bounced off of him on nearly every carry and he picked up every yard his heart desired. A 124-yard, two-touchdown game showcased why Chubb is one of the most dangerous runners in the NFL. If Cleveland can keep games closing moving forward, Chubb will thrive.

Cincinnati’s offense is undeniably better with Green on the field and he adds an essential weapon to this offense. It’s also evident Burrow trusts him, which is understandable since we’re talking about a seven-time Pro Bowl selection at receiver. Unfortunately, he didn’t play like it in Week 2 and it raises long-term concerns.

It started with not getting his feet down on the catch out of bounds. Even more unfortunate to watch, Green doesn’t look nearly as explosive after dealing with lower-body injuries for years. We saw it limit his big-play ability and he struggled more to separate from coverage. Additionally, he let a few catches through his hands that we’ve seen him making with ease in previous seasons. Rust could be a factor, but the truth is this is a 32-year-old receiver in physical decline.

Burrow gave himself a ‘D’ for his NFL debut in Week 1, a harsh grade given he performed admirably. He’s clearly setting the bar quite high for himself and that will help make him a great quarterback. After this performance, we hope he is kinder to himself after another tough loss.

Playing behind an atrocious offensive line, Burrow impressed under challenging circumstances. When he wasn’t getting hit or forced to evade pressure, his wide receivers dropped quite a few of his dimes. Burrow’s box score stats (37-of-61 with 316 passing yards) are impressive given everything he faced. Quite simply, he keeps proving why he can one day be an elite quarterback. Of course, that’s if Cincinnati can protect him moving forward.

Everyone talked about players needing the preseason to get in football shape, cut down on mental mistakes and to play crisper football. If we’ve learned one thing early in the 2020 season, a point emphasized on Thursday, it’s that the refs needed the preseason far more.

The gaffes started early with officials crediting A.J. Green with a catch, when he was clearly out of bounds. Both teams knew it immediately, but the refs and replay system took an absurd amount of time to review it. We also saw Cincinnati’s cornerbacks frequently grab OBJ, like this obvious penalty, but the NFL’s crew missed blatant penalties. This will be a problem for a while.

It would be an understatement to call Mayfield’s Week 1 start a disaster. He only completed 53.8% of his passes and averaged 4.8 yards per attempt, frequently missing open receivers and rolling out of clean pockets. In Week 2, we saw a very different quarterback.

Credit to head coach Kevin Stefanski for finding ways to get Mayfield comfortable. Cleveland regularly used designed rollouts with Mayfield moving to his right or left, then delivering strikes down the field. He completed 16-of-23 attempts with 219 passing yards and two touchdowns. If he can clean up the costly turnovers and make smart decisions, the Browns might contend for a wild-card spot this season.