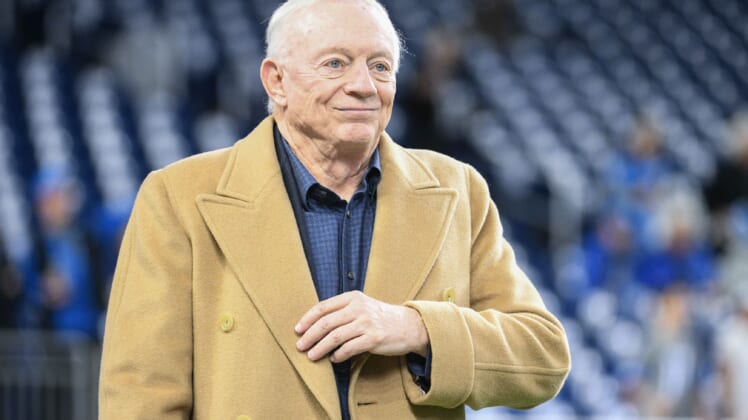 The 2020 NFL season is fast approaching and while plenty of the focus centers on how the Dallas Cowboys will perform this season, owner Jerry Jones is also thinking about players protesting during the national anthem.

Jones has worked with the players to discuss the peaceful demonstration and called for change in the United States following recent incidents of police brutality and the murder of George Floyd. However, with thousands of fans waiting to watch the Cowboys at AT&T Stadium, Dallas’ owner is also concerned about protests.

Jerry Jones: NFL fans turning away due to anthem protests is ‘huge issue’

While the NFL’s stance on the demonstration is changing and more players are expected to kneel this season, there remains a divide among football fans over the protests. It’s one Jones is very aware of and admittedly concerned about how it will impact interest in football.

“That is a huge issue. Huge. You know, just by the nature of the way that I run the team, how much I appreciate the interest that’s in the Dallas Cowboys,” Jerry Jones said, during an interview on 105.3 The Fan. “Now I know there’s interest just because they want to see us get beat, but still the big interest is there. I’m very sensitive to that. That’s exactly why I’ve said that I want our players to be very sensitive to just how important it is to the majority of our fans, more than any other team, the majority of our fans how sensitive they are recognizing what this great country is and what this flag stands for.”

However, the NFL is reportedly preparing to stand up to Trump this year with more players getting involved. Notably, New Orleans Saints star Drew Brees responded to Trump’s criticisms of those who kneeled.

Will the Dallas Cowboys kneel during the national anthem?

The Cowboys will allow players to take a knee during the playing of the national anthem this season. The team will open its season against the Los Angeles Rams at SoFi Stadium on Sunday, but fans in Dallas will have their chance to respond the following week.

As of now, no player has come out and said they plan to kneel during the national anthem. However, star running back Ezekiel Elliott made it clear that some of his teammates will participate in the demonstration this season.

This will be another key storyline of the upcoming season, especially for the Cowboys. Jones has reason to be excited about this team, which has its best chance to compete for a Super Bowl in years. Simultaneously, with attendance already limited by the COVID-19 pandemic, he will also be wondering just how much fan support the Cowboys will have this year.