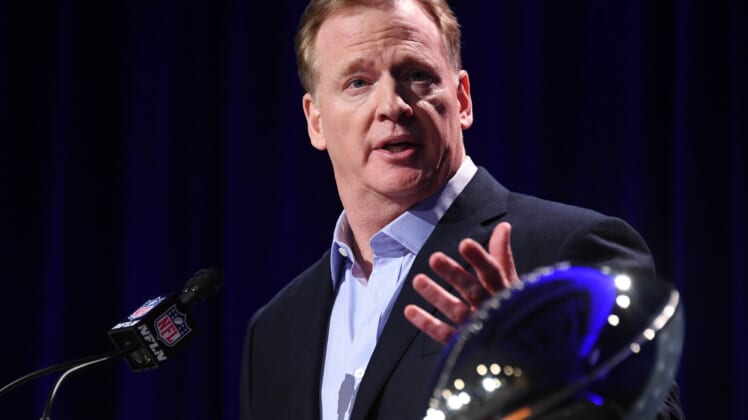 The NFL has enjoyed tremendous growth and record-setting revenue each year since Roger Goodell became the NFL commissioner in 2006. Now, the league could already be considering who will replace Goodell at the top when his contract ends.

According to Yahoo Sports’ Charles Robinson, there is already speculation within the NFL about Roger Goodell’s successor with the hopes of ushering in a new voice to lead the league when his contract expires.

Goodell officially became the NFL commissioner on Sept. 1, 2006, taking over for Paul Tagliabue. During his tenure, Goodell has helped the league get through the “Spygate” scandal, the 2011 NFL lockout, Ray Rice’s domestic violence case, the 2012 referee lockout, “Bountygate” and a massive concussion lawsuit.

Most recently, the NFL went through players kneeling during the national anthem. The movement, led by Colin Kaepernick to raise awareness for police brutality in the United States, led to President Trump blasting the league and the NFL ultimately encouraged players to stand.

Following the death of George Floyd in police custody and national protests calling for police reform, NFL players demanded the league speak out. On Friday, Goodell released a statement supporting the Black Lives Matter movement and admitting the NFL got it wrong about player protests.

While NFL owners are pleased with how Goodell has helped the league grow, mainly the profits, some team owners are reportedly not shy about discussing his next replacement. Specifically, they are looking for a new voice who can lead the league into a new future.

Who could replace Roger Goodell as the next NFL commissioner?

Goodell’s contract doesn’t end until after the 2023 NFL season, so the league has plenty of time. Now that the new CBA is signed, locking the NFL into 10 years of labor peace, the league is focused on negotiating record-breaking media deals with television networks. Once that is done, though, the search for the next NFL commissioner could move quickly.

The NFL could already have its eye on Goodell’s successor. The Athletic’s Daniel Kaplan reported in July of 2019 that Kevin Warren is viewed as a future NFL commissioner. Warren, who would become the NFL’s first African-American commissioner, currently serves as the Big Ten commissioner.

Goodell’s tenure will hold an important place in the history of the NFL. However, with a new decade starting, the league is clearly thinking about creating a new chapter for the future.