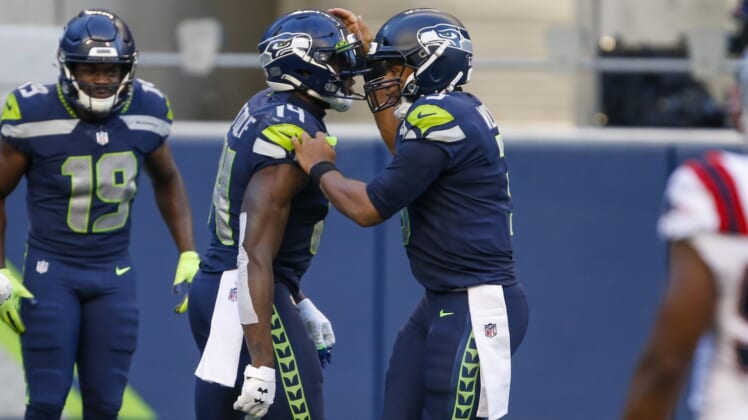 Russell Wilson taking on Cam Newton in a rivalry renewed. The New England Patriots looking to continue their early-season success in their first year without Tom Brady under center in two decades.

As for Wilson and his Seattle Seahawks, last week’s blowout win over the Atlanta Falcons proved to be no fluke. Wilson is clicking big time. He talled five touchdown passes in Sunday night’s thrilling 35-30 win over New England that culminated in a goal-line stop by Seattle’s defense.

Unfortunately for the Patriots, they could not keep up iwth Seattle’s offensive attack. That’s primarily because Newton had no help from his running backs.

These are among the biggest winners and losers from the Seahawks’ five-point victory over New England on “Sunday Night Football.”

Sunday night’s game against an elite Patriots defense did not start out too swimmingly for Mr. Wilson. He threw a pick-six into the hands of Devin McCourty on a ball that was tipped by tight end Greg Olsen. That was no fault of the early-season MVP favorite. It’s what Wilson did after this that had people talking.

Ultimately, the Super Bowl-winning quarterback completed 19 of his final 24 passes. That included five touchdown passes in the Seahawks’ five-point win. Wilson has now tallied nine passing touchdowns and one interception through the first two games of the 2020 NFL season. He’s, almost literally, in a league of his own right now.

Loser: N’Keal Harry continues to come up small for the Patriots

After putting up just 39 yards on five receptions back in Week 1, this second-year wide receiver continues to struggle stretching the field. Harry tallied a total of 72 yards on 12 targets against the Seahawks on Sunday night.

This type of performance just isn’t going to cut it for head coach Bill Belichick after he had Harry in his dog house throughout the Arizona State product’s rookie season. Cam Newton needs more down-field options. Harry simply has not been that with 111 yards on 18 targets as a sophomore.

We saw it during the All-Pro safety’s debut with the Seattle Seahawks last week. An ability to make play after play at the line from the safety position. There’s a reason Seattle yielded multiple first-round picks to acquire Adams from the New York Jets ahead of Week 1.

New England found that out first-hand Sunday night in the Pacific Northwest. Adams recorded 10 tackles, two quarterback hits, a tackle for loss and a sack in the win. As of right now, he looks to be the best safety in the NFL. Seattle certainly got itself a heck of a player.

It was downright brutal behind Cam Newton Sunday night in Seattle. As the quarterback went off for 444 total yards and three touchdowns, his backs could not do a darn thing against a solid Seahawks defensive front.

The likes of Sony Michel, Rex Burkhead and J.J. Taylor combined for 20 rushing yards on 14 attempts. Fortunately, the lack of balance only led to five hits of Newton. There’s no telling whether that will continue to be the case moving forward.

Winner: D.K. Metcalf is going to be a player

After falling to Seattle in the second round of the 2019 NFL Draft, there was some concern that this former Mississippi star wouldn’t be able to stretch the field at the professional level. Boy, were those concerns overblown. Metcalf averaged a whopping 15.5 yards per reception last season. He’s now taken this to a whole new level as a sophomore.

Including that 54-yard touchdown catch, Metcalf tallied 92 yards on four targets Sunday night. This comes after he put up 93 yards and a touchdown on four receptions in Seattle’s Week 1 blowout win over the Atlanta Falcons. This dude is the real deal.

This narrative can now die a quick death. Once the Carolina Panthers released Newton during the late stages of free agency this past spring, interest in the former NFL MVP was not there. Newton ultimately signed a prove-it deal with New England, only after the team grew weary of young quarterback Jarrett Stidham.

Through two games, Newton has proven skeptics wrong at every turn. He almost led New England back from a double-digit fourth quarter deficit against Seattle, only to come up short on a quarterback sneak as time expired. All said, Newton put up 444 total yards and three scores. The dude is back.