The Pittsburgh Steelers and Dallas Cowboys kicked off the 2021 NFL preseason in Canton, Ohio, for the Hall of Fame Game, and with that came a huge boost to NFL TV ratings for the exhibition schedule.

According to Sports Media Watch, an average of 7.31 million viewers tuned in for the Cowboys-Steelers matchup on FOX. This was the highest viewership total since 2017’s edition of the Hall of Fame Game, which pitted Dallas against the Arizona Cardinals.

It’s clear that the Cowboys still move the needle as America’s Team even when it’s a preseason contest. Everyone knew Dallas starting QB Dak Prescott wasn’t going to play, but the fact that multiple Steelers were due to be inducted into the Pro Football Hall of Fame likely helped the viewership spike 37% from the previous game in 2019, too.

Will the Cowboys or Steelers make the postseason this year? Read our NFL playoff predictions here

Pittsburgh wound up winning the Hall of Fame Game 16-3. The score suggests that the Steelers’ elite, stacked defense has plenty of depth behind superstar starters like T.J. Watt, Cameron Heyward and Minkah Fitzpatrick.

It’s quite likely that big-brand teams like the Steelers and Cowboys will continue to be scheduled for the Hall of Fame Game going forward. The Denver Broncos and Atlanta Falcons didn’t really move the needle in 2019, and were actually the lowest-rated Hall of Fame Game in more than two decades.

The 2021 Hall of Fame Game ratings were especially stout considering it was airing opposite the Tokyo Olympics.

It was good for Pittsburgh to get rookie first-round tailback Najee Harris some touches, but the Steelers’ success will likely come down to how well they block in front of the former Alabama star. They’ve overhauled their offensive line, and have arguably gotten worse at almost every position up front. Harris’ best efforts will be for naught if that unit isn’t up to snuff.

The 2021 campaign also may mark the latest for future Hall of Fame QB Ben Roethlisberger. Pass protection will be paramount as the aging Big Ben makes his last stand, and again, Harris’ ability to run the ball for the NFL’s reigning last-ranked rushing offense will go a long way in determining how well Roethlisberger fares. 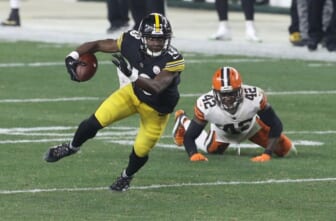 As for the Cowboys, they’ll have an advantage with a presumably elite offense led by Prescott, a much healthier o-line than a year ago, and hopefully a return to form for dynamic ball-carrier Ezekiel Elliott.

It’ll be key for new defensive coordinator Dan Quinn to improve Dallas’ weaknesses on that side of the ball, and a simplified, base Cover 3 scheme should help the cause.

In a wide-open NFC East division, it certainly feels like the Cowboys have a better chance of contending for the title than Pittsburgh has at defending its AFC North crown.