Pittsburgh Steelers wide receiver James Washington has requested a trade due to his increasingly diminished role in the team’s offense, per ESPN’s Adam Schefter.

It’s hardly a surprise Washington wants out, as he looks to showcase himself amid a contract year. Let’s take a look at three ideal destinations for him.

Let’s assume the asking price for someone with James Washington’s stats — a modest 90 catches for 1,344 yards and nine touchdowns in three seasons — is a fourth- or fifth-round pick, or an equivalent player.

With Michael Thomas missing the start of the season due to ankle surgery, there aren’t many teams in more dire need of a wide receiver than the Saints. Not only are they transitioning away from the Drew Brees era, but their new best wideout might actually be tailback Alvin Kamara.

When opponents can just collapse onto Kamara and no one else scares them, that’s a problem. Whether it’s Taysom Hill or Jameis Winston as QB1 in New Orleans, the current circumstances aren’t great — even with an offensive wizard like Sean Payton as head coach.

Washington isn’t going to replace Thomas’ production, yet he’s the perfect deep threat to complement the prolific possession receiver’s savvy knack for getting open underneath. If an increased role with a great organization is something Washington covets, he should leap at the chance to go to the Saints.

How does the Saints’ QB situation impact their standing in our NFL power rankings? Click here to see

It’s not like Allen Robinson isn’t elite at pretty much everything. Darnell Mooney can also blow the top off a defense with his great long speed, but he’s a second-year fifth-round pick, so who knows what he’s going to be at this point?

Having another legitimately dependable receiver who could take some pressure off Mooney and potentially capitalize on coverage rolling Robinson’s way is a great proposition for Chicago regardless of who starts at quarterback.

The thing is, though, Andy Dalton is a mere stopgap field general. Justin Fields will eventually be the Bears’ starter. He excels at pushing the ball deep, which fits directly with what Washington is best at. 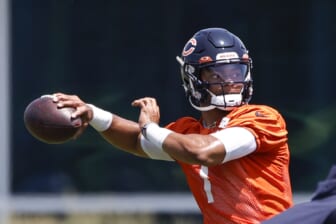 Seriously, if the Bears want to challenge the Green Bay Packers and create leverage in their passing attack against a secondary that features lockdown corner Jaire Alexander and star ex-Chicago safety Adrian Amos, they need more weapons. Washington is about the best the Bears could do in a bargain trade at this point.

Find out where Allen Robinson, Jaire Alexander and Adrian Amos rank on our list of top 100 NFL players

The NFC East feels pretty wide-open right now, and if the Eagles want to maximize their chances of getting the most from second-year QB Jalen Hurts, it’d behoove them to get him another viable pass-catcher.

An added bonus of bringing Washington aboard, too, would be his pushing 2020 first-round pick Jalen Reagor for the No. 2 receiver spot. Reagor disappointed as a rookie, and looks to already be beaten out by reigning Heisman Trophy winner DeVonta Smith, whose chemistry with his ex-Alabama teammate Hurts is evident in training camp.

How many games can Philadelphia win with Jalen Hurts in 2021? Read our preview of the Eagles’ schedule

Philadelphia realistically can’t expect practice squad alumni Greg Ward Jr. and Travis Fulgham to deliver the goods. Washington is more talented than both of them, and when he had his most significant role in 2019 with the Steelers, he had 44 receptions for 735 yards that year.

That’s better than anyone else in the Eagles’ current receiving corps can boast. While Washington isn’t the truly seasoned vet Hurts could really use, he’s someone Philly could get at a bargain right now, and a player who’d be driven to prove everyone in Pittsburgh wrong — just Hurts and the Eagles hope to do to all their doubters this year.