Don’t sleep on the Chargers in 2021. Los Angeles boasts the defensive talent to be a top-10 unit in the NFL and its offense offers just as much potential. The Cowboys are at a noteworthy disadvantage without Michael Gallup and La’el Collins. Dak Prescott will post big numbers and keep this close, but we like the Chargers on the road. 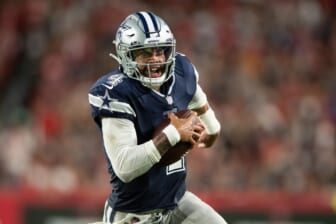 The Dallas Cowboys put up a heck of a fight on the road against the defending champion Tampa Bay Buccaneers in this one. Dallas held a one-point lead late in the fourth quarter after Prescott led the team to a field goal. Unfortunately, the Cowboys’ defense could not step up when it counted the most. Instead, Tom Brady did what GOAT does best — lead his team to a win. Perhaps, this was a baby step for Dallas.

The Eagles are rebuilding, even if the organization doesn’t want to call it that. While Jalen Hurts does some nice things, he’s not the caliber of passer who can attack the Cowboys’ secondary. On the other side, the Cowboys’ receiving corps will overwhelm Philadelphia and Prescott should go off for 300-plus yards and three touchdowns.

If you’re looking for a matchup with highlight plays and plenty of scoring, this will be the game to watch. Carolina’s secondary should be more consistent in 2021, but it’s still very inexperienced and star players will make plays against it. Ultimately, this comes down to Prescott vs. Sam Darnold. 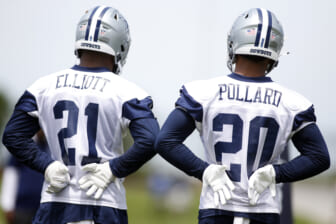 If you the Giants and Cowboys swapped quarterbacks, New York is a Super Bowl contender and Dallas is making a top-10 pick every year. The Giants’ defense is strong, especially the defensive backfield, but its pass rush couldn’t consistently get home last year and struggled against the run. Dallas has enough firepower, with a healthy Prescott, to win.

Mac Jones should have some fun against the Cowboys’ secondary. But that’s not going to be the way Bill Belichick wins this game. He’s going to find ways to pressure Dak Prescott and he’ll let his front seven bottle up Ezekiel Elliott. 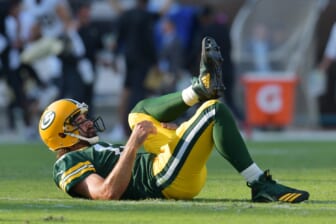 Containing Minnesota’s rushing attack is the key to victory. While there are issues with the Cowboys’ secondary, this front seven will cause problems for opponents in 2021. With the speed and strength to win in the box, Dallas should walk out of Minnesota as the winner.

If the Denver Broncos could find a way to upgrade at quarterback, they steamroll the Denver Broncos. But with Drew Lock the likely starter, it will take a phenomenal defensive performance to win this game. It should be similar to the Patriots’ matchup, but the difference is location and coaching.

Atlanta’s offense should put up plenty of points in 2021, even after Julio Jones is traded. But defensively, the Falcons have one of the thinnest depth charts in the NFL. Prescott and Co. won’t need an onside kick to secure a victory, but there might need to be a few clutch fourth-quarter dimes from No. 4.

While matchups between great quarterbacks are fun, they become a little less interesting in games like this. The Chiefs’ roster is superior to what Dallas will throw out on the field, even if everyone is healthy. Patrick Mahomes will carve the Cowboys’ defense to shreds and this one might be over by halftime.

Dallas didn’t get a lot better this offseason, but the Las Vegas Raiders are much worse than the team we saw in 2020. Quinn’s defense will generate pressure on Derek Carr, Ezekiel Elliott can run wild against the Raiders’ defense and this one should be over by the third quarter.

This might be one of the more underrated games on the 2021 schedule. Jameis Winston could put up some big numbers against the Cowboys’ defense, especially with Michael Thomas and Marquez Callaway likely both playing in this game. With that said, Dallas is at home and it has enough advantages to win.

It all starts in the trenches and that’s what allows Washington to take away what the Cowboys do best. Chase Young and Co. should have little issue getting to Prescott and with little time to throw, Washington’s secondary will create a game-changing turnover that decides this matchup.

Beating your rival twice in one year is difficult, especially when that opponent’s greatest strength is its defense. New York will control the clock, control the Cowboys’ offensive tempo and have the crowd on their side. This will be a matchup that comes down to the final minutes, but New York did more to improve this spring and is the better team on paper.

In their two meetings against the Cowboys, Washington’s defense recorded 10 sacks and basically lived in the backfield. Chase Young is entering his second NFL season, Washington’s secondary is better than it was last season and its offense will be more explosive. With the WFT holding the advantages at key spots, they can exploit the Cowboys’ weaknesses.

Prescott’s injury kept us from seeing a potential shootout when these teams faced off last year. This time around, the Cowboys’ star will make it a far more thrilling game. But Arizona added to its defense and Kyler Murray should make a huge leap in his third NFL season.

The Cowboys won the draft-day trade with the Eagles and they will win this year’s rivalry series. Dallas is way too deep and talented at wide receiver for Philadelphia to handle and Prescott won’t miss big-play opportunities. With the Eagles unable to keep up, Dallas will especially enjoy a victory at Lincoln Financial Field.