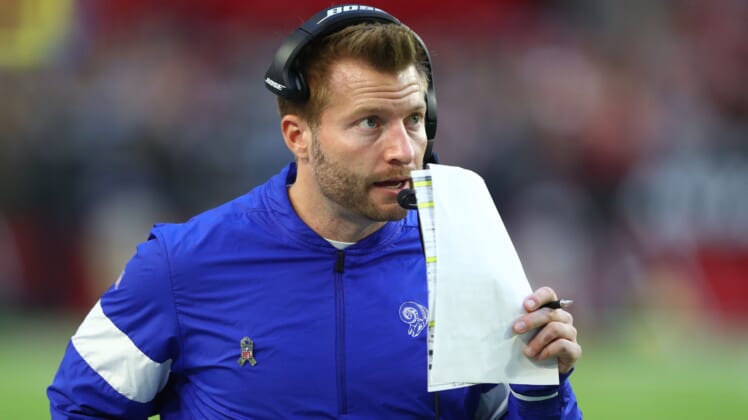 After getting turned down by Tony Romo and Peyton Manning, the network reportedly made an even bigger swing that would have shaken up the NFL

According to the New York Post‘s Andrew Marchand, ESPN executives reached out to McVay this offseason to see if the 34-year-old coach would be interested in leaving the NFL for the broadcasting booth.

McVay turned down the opportunity, an understandable decision given he’s one of the NFL’s brightest minds. However, per Marchand, ESPN believes McVay could be a standout in the booth thanks to his incredible insight and engaging personality.

The network’s interest in McVay and the belief he could be a Jon Gruden-like hit in the “Monday Night Football” booth aren’t surprising. McVay has proven to be witty, intelligent and hilarious under the spotlight as a head coach. He also has one of the sharpest minds in football, recalling plays from past NFL seasons and even back to his high school days.

Of course, it makes no sense for McVay to leave the sidelines right now. While he could make more in the broadcasting booth, as we’ve seen with Tony Romo, McVay can be a head coach for another two decades and still have a long career after that in television.

Given he’s already won two NFC West crowns and an NFC championship, along with a 33-15 record, we don’t expect the Rams to let him go anytime soon.

Who will announce Monday Night Football this season?

ESPN made huge runs at every big name available this offseason. When the network lost out on Tony Romo, it pursued Peyton Manning. While the future Hall of Famer weighed his options, the network attempted to trade for NBC’s Al Michaels.

Once Manning and Romo rejected the offers, with NBC also declining to move Michaels, ESPN pursued New Orleans Saints quarterback Drew Brees. However, he chose to return for the 2020 NFL season then struck a deal to become a future game analyst for NBC.

Uncertainty for the 2020 college football season then led the network to consider moving Kirk Herbstreit and Chris Fowler into the MNF booth. They will be part of ESPN’s dual “Monday Night Football” broadcasts to open the NFL season, but ESPN went another direction.

Ultimately, ESPN reportedly settled on Steve Levy, Louis Riddick and Brian Griese for its broadcasting team. Levy will serve as the play-by-play announcer, while Griese and Riddick will provide commentary and analysis.