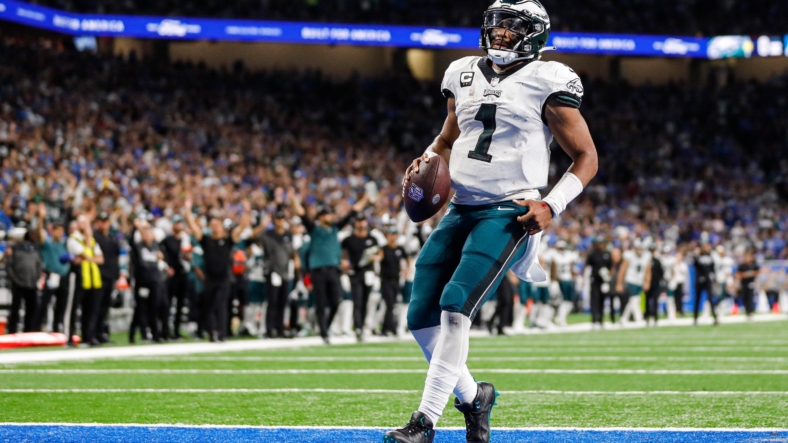 The 2022 NFL season is already through two weeks of action and we’ve seen some incredible performances along the way. As we gather more information on the best players and defenses, it helps shape weekly fantasy football rankings.

Naturally, the NFL injury report and recent trends play a huge factor in how specific players are viewed. The Trey Lance injury pushes Jimmy Garoppolo into the starting lineup, which bodes well for Deebo Samuel but is a blow for Brandon Aiyuk. As for recent performances, a resurgent week from Aaron Jones and disappointment regarding Jonathan Taylor also influence Week 3 running back rankings.

Let’s dive into our Week 3 fantasy football rankings by position.

It should come as no surprise that Josh Allen sits atop the Week 3 fantasy football rankings. The Buffalo Bills quarterback faces a Miami Dolphins that was just torn to shreds by Lamar Jackson. Buffalo’s offensive line and weaponry are even better than Baltimore’s cast, putting Allen on the watch for a monster game.

Lamar Jackson and Jalen Hurts come in ahead of Justin Herbert for two reasons. First, Herbert is dealing with cartilage damage in his ribs that will make getting hit more painful. More importantly, the rushing ability of Jackson and Hurts dramatically raises their floor and they both have tasty matchups.

Justin Herbert wants to play on Sunday, but the Los Angeles Chargers quarterback would be doing it through extreme discomfort. He is a must-start against the Jacksonville Jaguars if he’s active, but there are also risks. If Herbert can’t play, we’d highlight the likes of Trevor Lawrence, Marcus Mariota and Jared Goff as replacements in our Week 3 fantasy football rankings.

It’s another week with Tom Brady and Aaron Rodgers both lower in our fantasy football rankings than the consensus. While a head-to-head battle could bring out the best of both quarterbacks, this is a daunting matchup. Defensively, Tampa Bay boasts the seventh-highest pressure rate (23.7%) and has allowed just a 54.6 passer rating with 10 sacks and 12 pass deflections in two games.

Meanwhile, Brady enters this matchup on a cold streak and a depleted Buccaneers’ receiving corps is in for a battle against the Packers’ secondary. With Chris Godwin, Mike Evans and Julio Jones all inactive, find whatever alternatives you can at quarterback.

Tua Tagovailoa is an even more attractive option heading into Sunday. The Buffalo Bills won’t have Micah Hyde, Tre’Davious White or Jordan Phillips against Miami. It hurts their pass rush and significantly alters their ability to stop the deep pass. This is a prime opportunity for Tagovailoa and he’s one of our favorite plays in Week 3 fantasy rankings.

We love both running backs in the Detroit Lions vs Minnesota Vikings matchup. Neither defense is particularly strong against the run and we’ve already seen early this season that both offenses have the blocking and play-call to create open running lanes. Give Dalvin Cook and D’Andre Swift a hole, it can be a 50-plus yard run.

Among the favorite plays from the running back rankings for Week 3 are Leonard Fournette, Antonio Gibson and Dameon Pierce. Fournette takes on a Packers’ defense that is allowing 5.6 yards per attempt and 153 rushing yards per game, making him the key to victory in Week 3. As for Gibson – 37 touches in two games – volume matters against a Philadelphia Eagles run that is susceptible to allowing explosive plays to running backs. Lastly, this is the Sunday when Pierce breaks out. The rookie took on 15 carries in Week 2 and there could be an even bigger workload in store now against a Bears’ run defense that already allowed 379 rushing yards.

There are quite a few running backs you’ll find lower in our Week 3 fantasy football rankings than elsewhere. While Aaron Jones is coming off a 170-yard performance, finding any room on the ground will be extraordinarily difficult facing Tampa Bay (86.5 ypg allowed). He is still an RB2 thanks to his pass-catching ability, which keeps AJ Dillon outside the top-30. There is also reason to be less optimistic for Najee Harris on Thursday Night Football, as he will be running into a defense that has allowed just 3.8 ypr and 147 total rushing yards in two games.

Justin Jefferson will likely be No. 1 in the fantasy wide receiver rankings every Sunday except on his bye week. The talent is reminiscent of all-time greats and he is in an offense that is tailored to get him the football. Add in the fact he’s facing the Detroit Lions’ secondary (273.5 pass ypg allowed) and his selection is obvious. There’s also plenty of reason to anticipate Davante Adams rebounding after a disappointing Week 2 performance, while the Cincinnati Bengals are in a must-win game and they’ll want to feed Ja’Marr Chase after his post-game comments.

Moving down the Week 3 fantasy football rankings, Amon-Ra St. Brown proved his point. He became just the third player in NFL history with at least eight receptions in eight consecutive games and he is clearly the No. 1 receiver in this offense. It’s also time to fully commit to Rashod Bateman, who proved against Miami that he is the new big-play threat in this aerial attack and he can do far more than Marquise Brown ever did.

We’d advise fantasy managers to temper expectations for Allen Robinson, drawing a matchup against Byron Murphy Jr. after the Cardinals’ cornerback locked down Davante Adams. In a similar fashion, Courtland Sutton is a risky play with limited upside with 49ers’ cornerback Charvarius Ward likely drawing him in coverage.

Jaylen Waddle and Tyreek Hill should both now be viewed as WR1s. in Week 3. Buffalo is without Tre’Davious White, Micah Hyde, Jordan Poyer, Ed Oliver and Jordan Phillips on Sunday. It means the Bills can’t generate the same level of interior pressure and they don’t have anyone who can either stop Waddle and Hill deep or stick with them on slants. We could be looking at dual 100-yard performances from the Dolphins’ stars once again.

Drake London is gaining more steam, climbing up the Week 3 fantasy football rankings. The rookie wideout has drawn 19 targets through two games, turning that into 13 receptions for 160 yards and he now draws a quality matchup. On the other end of the spectrum, Adam Thielen falls down the Week 3 fantasy rankings with only 88 receiving yards and zero touchdowns this season.

As our Week 3 fantasy football rankings show, we want to avoid all wide receivers in the Packers vs Buccaneers matchup. These are two fantastic defenses with high-end cornerbacks and safeties all combined with a top-flight pass rush. Green Bay didn’t have a high-end No. 2 receiver, let alone a No. 1 wideout, to begin with and Tampa Bay is so short-handed that every remaining option is a gamble.

In terms of Week 3 fantasy sleepers, the likes of Brandin Cooks, Curtis Samuel and rookie Garrett Wilson are intriguing options. If Houston keeps Cooks away from Jaylon Johnson and instead has him attack rookie Kyler Gordon, a 100-yard game is achievable. Samuel is coming off consecutive games with a touchdown and Wilson (14 targets in Week 2) clearly earned Joe Flacco’s trust.

Business as usual for Travis Kelce atop the Week 3 fantasy tight end rankings, especially against an Indianapolis Colts defense that plays with a vanilla scheme. Right behind him, Darren Waller is delivering a safe floor for fantasy managers and with vulnerabilities in the Tennessee Titans defense, 70 yards and a touchdown is doable.

As for Kyle Pitts, many are rightfully frustrated. The second-year tight end has just four receptions and 38 receiving yards heading into Week 3, a state line that he has the talent to achieve in a single quarter. While some might want to wave the white flag, Sunday is the perfect matchup for the Falcons’ offense to get right and that only happens if Pitts is a central focus of the passing game.

Mark Andrews remains his quarterback’s favorite target, but we must also consider recent history. In two matchups against Bill Belichick, Andrews has averaged just 41 receiving yards and he never found the end zone. This is the player Belichick will try to take out of the Ravens’ game plan, reducing Andrew’s ceiling and making him a player to avoid outside of season-long fantasy leagues.

With Taysom Hill out of the lineup for Week 3, it’s time to find an alternative for a sleeper. Mike Gesicki becomes the No. 19 tight end in our fantasy football rankings, but there is some risk. This is a game that could see play-caller Mike McDaniel want to establish the run early and then get Hill and Waddle involved. If that’s the case, it could mean only three targets for Gesicki. Just recognize there is far more volatility with him compared to 2021.