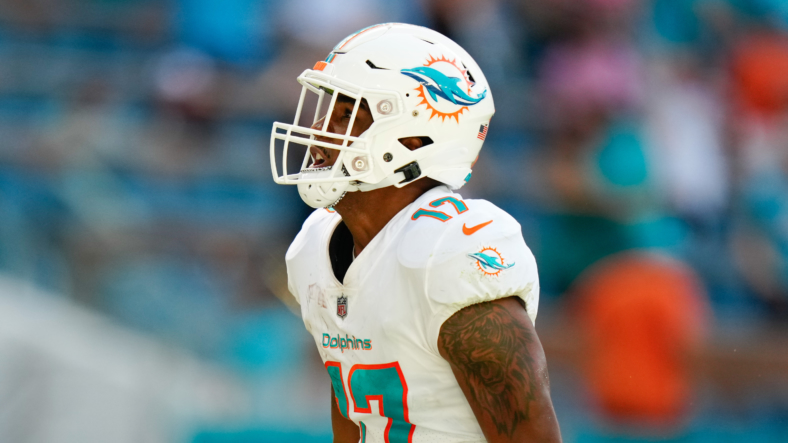 NFL wide receiver rankings: Find out who the top wide receivers around the NFL are, including a new top target for Derek Carr in Las Vegas who has struggled this season. We also love what youngster Jaylen Waddle is doing for the Miami Dolphins.

In a list that will be updated weekly throughout the 2022 season, we give you our third NFL wide receiver rankings of the regular season heading into Week 4.

The only thing stopping McLaurin from ascending these rankings is questionable quarterback play in Washington. We never know what Carson Wentz is going to bring to the table after struggling with the Philadelphia Eagles and Indianapolis Colts over the past two seasons. What we do know is that the recently-extended McLaurin was pretty darn good for an otherwise pedestrian squad a season ago.

Thus far this season, the Ohio State product has been pretty darn good catching passes from Wentz. That included a six-catch, 102-yard performance in a loss to the Philadelphia Eagles in Week 3. The only thing holding McLaurin back is the fact that he’s dropped two passes already this season.

In Dallas’ ugly season-opening loss to the Tampa Bay Buccaneers, Lamb was among the most-disappointing players. He caught just two passes for 29 yards, averaging an ugly 2.6 yards per target.

Once Dak Prescott went down to injury, most figured Lamb would struggle with Cooper Rush tossing him the rock. That has not been the case. In Rush’s two starts, Lamb has caught 15-of-23 passes for 162 yards, including a circus one-handed touchdown. He also dropped another score, disallowing us to move him up too much in our NFL wide receiver rankings head into Week 4.

With a 116-yard performance in a win over the Washington Commanders in Week 2, St. Brown is in the NFL record books. The sophomore pass-catcher became tied the record for the most consecutive games with eight-plus catches. This USC product has been on an absolute tear since the Lions made him a fourth-round pick back in 2021.

Over the course of his first 20 career games, St. Brown has caught 113 passes for 1,165 yards and eight touchdowns while hauling in 74.3% of his targets. Let’s just hope a recent ankle injury doesn’t keep him out for too long.

How consistently good has Evans been throughout his eight-year career? He’s put up north of 1,000 yards each season, making him the first player NFL history to reach that plateau in eight consecutive years to open his career. It’s been even better for the 29-year-old Texas A&M product since Tom Brady joined the Bucs back in 2020.

It’s the catch rate that stands out the most. In Jameis Winston’s final season with Tampa Bay, Evans caught just 57% of his targets. In fact, his catch rate stood at 60-plus percent just once in his first six seasons. He’s simply become a more well-rounded receiver in recent years. Unfortunately, Evans was suspended for Week 3 after getting into it with Saints cornerback Marshon Lattimore this past Sunday. He’ll return this week against the Kansas City Chiefs.

Speaking of consistency. This is what has Allen in the top 10 of our NFL wide receiver rankings heading into his 10th season with the Chargers. Here’s a dude who has tallied north of 1,000 yards all but once since the end of the 2016 season. That came back in 2020 when Allen put up 992 yards while catching 68% of his passes in 14 games.

Fresh off earning his fifth consecutive Pro Bowl appearance, Allen is set to work with stud young quarterback Justin Herbert once again in 2022. He put up a career-high 106 receptions in catching passes from Herbert a season ago. Unfortunately, Allen pulled up lame with a hamstring injury in Week 1 and is currently sidelined. That impacts him some in our most-recent NFL wide receiver rankings. Though, Allen should be back for Week 4.

Suspended for the first six games of the 2022 season, Hopkins has not produced at the same level in Arizona as we saw with the Houston Texans earlier in his career. He put up just 572 yards in 10 games a season ago while dealing with a plethora of injuries. However, this doesn’t discount what he did with the Cardinals in his first season with the team back in 2020 (115 receptions, 1,507 yards, 72% catch rate).

Still locked in with Kyler Murray in the desert, there’s no reason to believe that Hopkins can’t emerge as one of the game’s best playmakers once he does return from suspension. During a six-year span from 2015-20, he averaged 103 receptions or 1,332 yards and nine touchdowns. That’s simply remarkable.

The 26-year-old Samuel is coming off one of the best all-around seasons for a playmaker in modern NFL history. It led to him signing a lucrative extension with San Francisco after initially requesting a trade early in the offseason. For San Francisco, Samuel’s return was seen as a huge thing given the presence of young quarterback Trey Lance under center.

Two things keeping Samuel from being higher in our NFL wide receiver rankings is the fact that he’s done it for just one season and the 10 drops he put up for San Francisco in 2021. He also struggled catching the ball from Lance in the first two games. In Jimmy Garoppolo’s first start replacing the injured Lance last week, Samuel did come away with five receptions for 73 yards. That’s a step in the right direction.

Chase continues to drop down in our NFL wide receiver rankings after putting up a stellar rookie season for Cincinnati. Last week saw the former LSU standout put up just 29 receiving yards on 10 targets. Thus far this season, he’s averaging 6.1 yards per target compared to 11.4 as a rookie.

More troubling here is the fact the Chase has already let four ball slip through his hands, equating to a bloated 11.4% drop rate. Concerns some had over his hands leading up to the 2021 NFL Draft are suddenly coming to fruition here.

No, Adams was not a product of Aaron Rodgers in Green Bay. Sure it helps having one of the best quarterbacks of all-time. But Adams is also one of the reasons why Rodgers is coming off his second consecutive MVP season. Simply put, the Fresno State product is among the most dominating receivers of the modern era.

Over the course of the past two seasons, Adams has caught 238 passes for 2,927 yards and 29 touchdowns while hauling in 75% of his targets. That very same span has seen Adams drop just four passes. Unfortunately, Adams has not been able to make sweet music for former Fresno State teammate Derek Carr this season. After a solid Week 1 outing, Adams has caught all of seven passes for 48 yards on 17 targets over the past two games. It’s led to some frustration on his part.

Acquired from the Tennessee Titans in a blockbuster NFL Draft deal, Brown now joins DeVonta Smith as another elite-level weapon for Jalen Hurts in Philadelphia. Brown joined his former Mississippi teammate in DK Metcalf in proving skeptics wrong after being selected in the second round of the 2019 NFL Draft. What he’s done since is remarkable.

That’s been taken to a whole new level in 2022 after Brown was acquired from the Tennessee Titans in an off-season trade. Brown has put up 69 yards or more in all three games catching passes from Jalen Hurts. He’s also averaging a robust 10.0 yards per target while having yet to drop a single pass on 31 targets.

Last season with Patrick Mahomes tossing him th rock in Kansas City, Hill brought in 70% of his targets. He also put up a mere 4.4% drop rate on 159 targets. He’s been even better in South Beach to open the 2022 campaign, including a 190-yard Week 2 performance against the Baltimore Ravens. With that said, Hill’s success took a back seat in a Week 3 win over the Buffalo Bills wth him catching just 2-of-4 targets for 33 yards in the win.

The 2022 season has been more of a mixed bag, and it shows in our updated NFL wide receiver rankings. After a brilliant 184-yard performance against the Green Bay Packers in Week 1, Jefferson has caught 9-of-18 targets for 62 yards. That’s under four yards per target. Ouch!

Waddle has been even better as a sophomore, providing improved quarterback Tua Tagovailoa with another electric target. A total of 16 of his 19 receptions in 2022 have gone for a first down while Tua boasts a 121.8 QB rating when targeting the young stud. That’s just absurd.

The reigning NFL Offensive Player of the Year and Super Bowl MVP, Kupp opens the 2022 season No. 1 in Sportsnaut’s NFL wide receiver rankings. For good reason. The former third-round pick from Eastern Washington led the league in receptions, yards and receiving touchdowns a season ago. He was simply dominating in every possible way.

Talk about an epic performance catching passes from Matthew Stafford. There’s also no reason to believe that the 29-year-old Kupp is going to slow down any time soon. Without many other options in the passing game, Stafford has targeted Kupp 35 times in three games with one drop.

Back in 2020 with Buffalo, Diggs led the NFL in receptions (127) and receiving yards (1,535) while hauling in an otherworldly 77% of his targets and dropping a mere five passes. Diggs picked up where he left off with brilliant performances to open the 2022 season, including a three-touchdown outing against the Tennessee Titans in Week 2.