How to Watch the 2022 PGA Championship

Don't miss a single shot this weekend! Find out how to live stream the 2022 PGA Championship here. 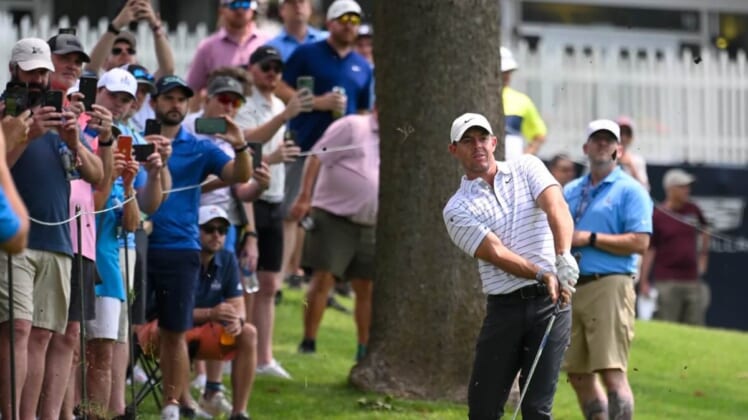 Returning to the Southern Hills Country Club in Tulsa, Oklahoma, after 15 years, the second major of 2022 has a long list of big names — one of which is noticeably missing. Last year’s champion, Phil Mickelson, pulled out of the 2022 PGA Championship, sacrificing his chance to defend his title.

Following the news of Mickelson’s absence, PGA’s announcement of the first two round’s groupings re-upped spirits. Tiger Woods, Rory Mcllroy, and Jordan Spieth will tee off together on Thursday at 9:11 a.m. ET and Friday at 1:36 p.m. ET. Scottie Scheffler — the top player in the world and betting favorite — will play with Jon Rahm and Collin Morikawa at 2:36 p.m. ET on Thursday and 9:11 a.m. ET on Friday.

But if you’re hoping to catch the first group, be sure to tune in on Thursday by 8 a.m. ET at the latest, whether that’s on a major cable network or through a live TV streaming service. John Daly, Shaun Micheel, and Y.E. Yang will take the first hit of what’s bound to be a must-watch PGA event.

Watch the PGA Championship on Hulu

Where to watch the 2022 PGA Championship

To tune into the U.S. PGA Championship “old school” style, you can find it on ESPN and CBS. But if you prefer watching it on the go or from your phone, multiple live TV streaming services offer it. Our top suggestions for the best watch experience for golf fans include ESPN Plus, Hulu + Live TV, and YouTube TV. Take a look at what each service offers below:

With an ESPN Plus subscription, costing just $6.99 per month, you can stream live sports anytime, anywhere, whether it be golf (of course), soccer, combat, baseball, tennis, college sports, and more. You also get access to the full 30 for 30 library, Ultimate Fighting Championship (UFC) events, ESPN Plus Originals like “Man in the Arena” with Tom Brady, as well as daily sports talks, over 3,000 premium articles, and daily studio shows. ESPN Plus is the ultimate hub for sports fanatics.

While the streaming service doesn’t currently offer any discounts or free trials, you can still save by opting for the Disney Plus Bundle, a three-in-one deal. This bundle costs $13.99 per month and includes Hulu, Disney Plus, and ESPN Plus. If you can’t stand your shows or sports being interrupted by ads, you can pay just $6 more per month for a total of $19.99 per month for the Hulu (ad-free), Disney Plus, and ESPN Plus. The Disney Plus Bundle is a great deal because you’ll be paying less for the combined package than if you were to subscribe to each of the three services individually.

Did you know that Hulu + Live TV now includes ESPN Plus and Disney Plus? This live package is similar to the Disney Plus Bundle, but it offers Hulu + Live TV, as opposed to just regular Hulu. For $69.99 per month for the ad-supported version or $75.99 per month for the ad-free version, you get access to all three streaming services, which include an extensive selection of shows, movies, original series, news, and live sports. Specific channels you can find with this package are ABC, NBC, Golf Channel, TLC, TNT, and much more. With Hulu + Live TV, you’ll find the U.S. PGA Championship through ESPN and CBS.

With YouTube TV’s base plan, which currently costs $54.99 per month ($10 off your first three months), you can stream over 85 of your favorite live and local channels, including top entertainment, news, live sports, and more. You can also opt for the Spanish plan, which usually costs $34.99 per month but is currently on sale for $24.99 per month for your first six months. The Spanish plan provides you with 28+ Spanish networks of live sports, telenovelas, shows, and more. Through YouTube TV, you can stream the U.S. PGA Championship from the comfort of your own home on either ESPN or CBS.

You may have plenty of options to choose from if you’re tuning into the PGA Championship this weekend, but keep in mind that the tournament’s primary streaming platform is ESPN Plus. This means you’ll get access to early round coverage, featured groups, and even featured hole coverage — across all four days. Take it from us, you won’t want to miss the exclusive access.

You can find the full U.S. PGA Championship schedule and pairings here.