It’s time to ditch your cable provider for one of these live tv streaming services. Your wallet will thank you. 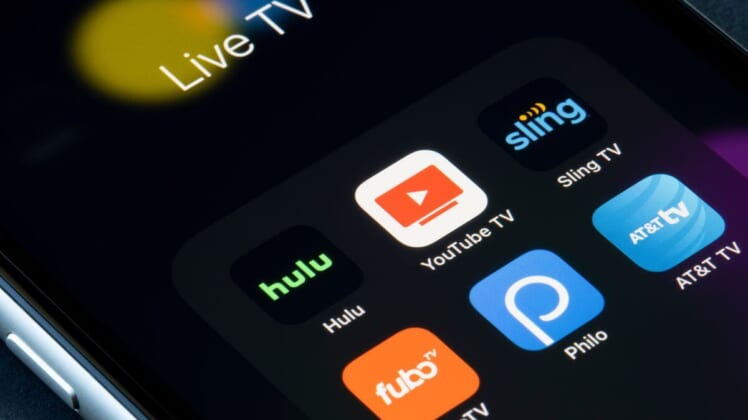 Over the past few years, we’ve all witnessed the slow disappearance of cable TV. Live TV streaming services are rapidly becoming the go-to alternative because of their affordable prices, customizable channel packages, convenience, and flexibility. But with so many live TV streaming services available, how do you know which one to choose? Below, we’ll cover everything you need to know to help you make the best decision.

With more than 45 million subscribers and some of the most popular original content on any streaming platform, Hulu is one of the best TV streaming services out there. Among the 75+ channels available, you’ll find ESPN, ESPN Plus, Disney Plus, Big Ten Network, Fox Sports, Animal Planet, Disney Channel, ABC, and CNN, as well as a few local channels like ABC, CBS, Fox, and NBC, depending on your area.

If you’re a sports fan, you’ll benefit greatly from Hulu + Live TV because you’ll be able to stream live baseball, football, and basketball on ESPN, as well as watch popular shows and movies like “Rick and Morty,” “Dancing with the Stars,” and “Boston Legal.” With the base Hulu plan, you’ll have access to a seven-day free trial, but unfortunately, Hulu + Live TV doesn’t have a trial available. Hulu’s most popular plans are:

YouTube TV is a video streaming service that features over 90 live TV channels, and it has one of the most complete channel lineups available. With YouTube TV, you’ll get a wide variety of content from networks like AMC, Cartoon Network, National Geographic, and Paramount, as well as an attractive lineup of local options. The streaming service is a fantastic choice for sports lovers, as you’ll get access to channels like CBS Sports, ESPN, ESPN 2, the NFL Network, NBC Sports Network, MLB Network, and NBA TV to catch your favorite games live.

Starting out as a live soccer streaming specialist, FuboTV has quickly become one of the go-to live TV streaming services for die-hard sports fans. With major channels like Fox Sports, NBA TV, The NFL Network, ABC Sports, and ESPN, you’re sure to find all the sports you love.

FuboTV isn’t limited to sports, though. You can also stream live TV from popular networks like A&E, BBC America, Discovery, USA Network, and local news networks. FuboTV’s plans start at $69.99 per month with over 110 channels, 1,000 hours of DVR storage, and 10 simultaneous streams.

Among the add-on premium channels, you’ll find Sports Plus ($10.99 per month), AMC Premiere ($4.99 per month), STARZ ($8.99 per month), and a series of packages like Adventure Plus, International Sports Plus, and Fubo Extra with channels like NickToons, People TV, the Cooking Channel, and Magnolia Network. Paired with a standard seven-day free trial, FuboTV is an excellent choice for a live TV streaming service.

When live TV streaming services started gaining popularity, Sling TV was at the forefront of the trend. It offers reasonable pricing with a respectable channel lineup, perfect for those looking for a balance between sports and general entertainment.

Sling TV offers three plans: Sling Orange ($35 per month), Sling Blue ($35 per month), and Sling Orange + Blue ($50 per month). Sling Orange is more sports-focused than Sling Blue, with three ESPN stations, Stadium, and MotorTrend, as well as more premium channels like Disney. Sling Blue, on the other hand, offers about 10 more channels than the Orange plan, and leans more towards general entertainment with options like Bravo, SyFy, TruTV, and FX. The Blue plan also offers local news channels depending on where you’re located, which Sling Orange doesn’t provide. If you prefer a more complete channel lineup, Sling also bundles the two packages with the Orange + Blue, giving you about 50 channels to choose from.

Philo stands out as one of the best budget live TV streaming services available, offering only one package at $25 per month with a seven-day free trial. You’ll get 60+ channels (including live TV), unlimited DVR recordings, and three simultaneous device streams.

In addition to live channels like A&E, Paramount, Hallmark, MTV, and Nickelodeon, you’ll also find an impressive collection of 60,000 on-demand titles. Unfortunately, to keep subscription costs low, Philo doesn’t offer live sports or local channels. But you’ll still find a couple of add-on options like STARZ and EPIX, giving you an extra 9,500 titles to choose from for a small additional charge (between $3 and $9 per month).

Almost everyone has heard of AT&T, but as the phone provider loses more and more subscribers from its traditional contracts, it decided to fight back by offering its own live TV streaming service: DirecTV. The full range of channels will vary depending on the package you choose, but you’ll get the most popular networks like ABC, FOX, CBS, Bravo, and Disney Channel with every package.

There are various packages available, as well as add-on options you can include in your subscription. The only difference between each of the packages is the number of channels available. No matter which option you choose, you’ll get a respectable selection of live sports like Fox Sports 1 and ESPN, as well as popular entertainment and local news networks. Here’s a break down of the pricing for each package:

Apple TV Plus is one of the most affordable on-demand streaming services, but it comes at a cost. While the platform primarily offers its own original content, it’s a much smaller lineup than you’d find on Hulu or Netflix. That being said, a subscription to Apple TV Plus is just $4.99 per month, featuring an ever-growing library of originals to enjoy. Currently, there are about 113 shows and movies available, with more being added every month. For viewers on the fence about the service, Apple TV Plus offers a seven-day free trial to help you make your decision.

You’ll have access to popular shows and award-winning films like “Ted Lasso” and “Severance,” as well as new releases like “The Big Conn.” In addition, you can create up to five profiles on your account, and you even have the ability to restrict certain content on specific profiles to protect younger family members from inappropriate content.

While Disney Plus is widely known as one of the best streaming services for kids, it appeals to older audiences, too. You’ll find a massive catalog of popular TV shows and movies (without ads and at an affordable price) that you can’t find anywhere else.

Starting out with over 8,000 titles to choose from, the catalog is constantly growing with additions like “Turning Red,” “Encanto,” and “Hocus Pocus 2.” In the lineup, you’ll find Marvel, Star Wars, Pixar, and even National Geographic, too.

As a standalone subscription, Disney Plus only costs $8 per month. But there are multiple ways to bundle it with Hulu and ESPN Plus to save money in the long-run. For example, Hulu-billed members who don’t have Disney Plus can add it to their subscription for only $2.99 per month. The downside of Disney Plus? There’s currently no free trial available.

Paramount Plus is the rebranded streaming service that replaced CBS All Access. As you might expect, you’ll be able to watch all of the provider’s network stations, including CBS News, CBSN, CBS Sports, and CBS Home Entertainment.

With a seven-day free trial, and a cost of $5.99 per month after that (or $9.99 per month for an ad-free experience with the Premium plan), you’ll have access to classic shows like “Star Trek” and “I Love Lucy,” or newer offerings like “The Good Fight.” Paramount Plus also offers a wide range of favorite films like “Stand By Me” and “The Godfather Trilogy.” What more could you ask for?

The first thing to understand about ESPN Plus is that it’s not the same as the regular ESPN channel. This means you won’t find flagship ESPN shows like SportsCenter or its live NFL and NBA broadcasts. However, ESPN Plus still offers a respectable lineup of live and on-demand sports, in addition to its top-notch 30 for 30 documentary series and E:60 productions.

For $6.99 per month, you’ll get live out-of-market NHL and MLB games, full replays, NBA G League matchups, and in-house series exclusively for the ESPN Plus platform. Unfortunately, the streaming service no longer offers a free trial, but you can bundle it with Disney Plus for free when you subscribe to Hulu + Live TV for $69.99 per month.

How to choose the best live TV streaming service for you?

Choosing the best live TV streaming service for you will come down to your preferences, needs, and interests. Some platforms like Hulu + Live TV or YouTube TV focus on giving a wide variety of entertainment options, and others like FuboTV are best for sports. Many services also offer a wide range of live news options and premium networks like HBO and SHOWTIME, giving you the ability to customize your subscription.

Aside from the type of content you’re most interested in, you’ll need to determine how much you’re willing to pay for a monthly subscription. Most platforms offer a range of packages to suit the needs of viewers, starting at as little as $5 per month and ending skyward of $100 for premium channel availability.

Plus, if having local channels is a deal-breaker, you should be aware that some services might have a limited range of options. But with the ability to customize your subscription with add-ons and premium channels, cable TV just doesn’t stand a chance. It’s also important to note that there are no lengthy contracts with TV streaming services, which means you can cancel your subscription at any time if you’re not satisfied. Once you determine your priorities, you’ll be able to decide on the best live TV streaming service for you.

No matter which streaming service you choose, you’ll likely be getting a cheaper, more flexible service than your current cable subscription. Most of the options listed above offer free trials, so if you’re still unsure, you could always give each one of them a try before making your final decision. But remember to cancel your subscription before the trial ends if you don’t want to automatically be charged for your first month.