The first round of the 2022 NFL Draft was held from Las Vegas Thursday evening. The first 32 picks of the annual event was filled with surprise after surprise.

The first five players off the board were defenders. A quarterback did not go until the Pittsburgh Steelers selected at 20. Multiple big-name wide receivers were traded. However, the one we thought would be moved after requesting a trade remains with his current team.

Here, we provide you with eight takeaways from the first round of the 2022 NFL Draft.

Related: Live NFL Draft tracker and grades for each pick

One of the weakest drafts at the quarterback position in modern history included Kenny Pickett coming off the board as the first signal caller to these Steelers with the 20th selection. It took Ben Roethlisberger to actually retire for outgoing general manager Kevin Colbert to make this decision.

There has to be some questions about whether Pickett was a one-year wonder for Pitt. There’s also some concern over his hand size. Even then, we have to give Pittsburgh some credit for biting the bullet in the 2022 NFL Draft and actually selecting a quarterback. Look for Pickett to be the long-term solution with Mitchell Trubisky being the stop-gap starter in 2022.

Talk about finding value at two positions of utmost need. Gardner will provide New York with that nastiness and confidence in the secondary after a dominating college career. Meanwhile, Wilson should help provide young quarterback Zach Wilson with another weapon to go with young slot guy Elijah Moore.

Teams valued defense at the top of the 2022 NFL Draft

It’s not a surprise that quarterbacks fell big time during the first round of the NFL Draft. With that said, the first five picks Thursday evening were all spent on defenders. This just goes to show us how teams valued that side of the ball.

The Jacksonville Jaguars’ decision to pass up on Aidan Hutchinson for Travon Walker was a bit surprising with the first pick. Hutchinson was much more productive from a pass-rush perspective. It seems as if general manager Trent Baalke and Co. valued the upside of Walker and what he did during the NFL Scouting Combine over Hutchinson’s college performance.

As for Hutchinson, he lands with his home state Detroit Lions at two. That’s an absolutely huge selection for general manager Brad Holmes. The New York Giants’ selection of fellow edge rusher Kayvon Thibodeaux with the fifth pick gives them that outside pass-rush threat that they desperately need under new defensive coordinator Don Martindale. 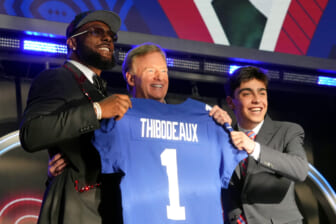 One of the biggest issues for Russell Wilson in the Pacific Northwest prior to his trade to the Denver Broncos. After all, Wilson was sacked a whopping 427 times in his 10 seasons with the team. It was all the way back in February of 2021 that Wilson touched on this.

“Like any player, you never want to get hit. That’s the reality of playing this position. Ask any quarterback who wants to play this game. … I think that the reality is I’ve definitely been hit. I’ve been sacked almost 400 times, so we’ve got to get better.

So, what did Seattle do with the first of multiple picks it acquired from the Broncos for Wilson? It added former Mississippi State left tackle Charles Cross to the mix. That seems to be a troll job. In all seriousness, Cross will now be in the mix as a rookie to help protect new quarterback Drew Lock in the Pacific Northwest.

Baltimore was among the most-active teams on the trade block during the first round of the 2022 NFL Draft. That included landing a stud safety in Kyle Hamilton from Notre Dame with the 14th pick. A generational safety prospect, Hamilton headed into the draft as our fifth-ranked prospect. Talk about value at a need position.

A bit later on Day 1 of the NFL Draft, Baltimore shocked the football world by moving No. 1 wide receiver Marquise Brown to the Arizona Cardinals with a third-round pick (100th overall) for the 23rd pick in the draft. This leaves a huge hole at wide receiver for former NFL MVP Lamar Jackson and will have Baltmore searching for more help at wide receiver.

It wasn’t a secret that the Eagles had been targeting a wide receiver with one of their two first-round picks Thursday evening. However, we had absolutely no idea that Philadelphia was going to pull off the biggest blockbuster of the draft.

The Eagles sent their first-round pick (18th overall) and a third-round selection to the Tennessee Titans for stud young wide receiver A.J. Brown. Philly then signed Brown to a new four-year, $100 million extension.

Talk about going all in with Jalen Hurts under center. Brown will now team up with 2021 first-round pick Devonta Smith to form one of the better wide receiver tandems in the entire NFL. Philadelphia was also able to keep both of its two first-round picks in the 2023 NFL Draft. That’s a win.

As we noted above, Kenny Pickett was the first quarterback off the board at 20 to the Steelers. As the first round of the NFL Draft continued, not a single other quarterback heard his name called. That included former Liberty standout Malik Willis, who was actually drawing some interest from the Detroit Lions with the second overall selection.

It’s going to be interesting to see how the top of the second round plays out with the likes of Willis, Sam Howell, Matt Corral and Desmond Ridder all available. The expectation here is that they’ll be a run of quarterbacks at the top of Round 2.

Most figured that Samuel would be the biggest-named wide receiver traded on Day 1. Reports had indicated that the Jets offered up the 10th pick as part of a package for the disgruntled 49ers wide receiver.

Instead, we saw the likes of A.J. Brown and Marquise Brown traded. A total of six wide receivers also went in the first round. Meawnhile, Samuel remains with the 49ers more than a week after he requested a trade from the organization.

This is certainly something to keep an eye on as the offseason progresses. For a 49ers team set to rely on young quarterback Trey Lance next season, they don’t want to have the drama that would come with Samuel holding out and showing that he’s not all in moving forward.