Seattle Seahawks QB Russell Wilson ‘frustrated with getting hit too much’ 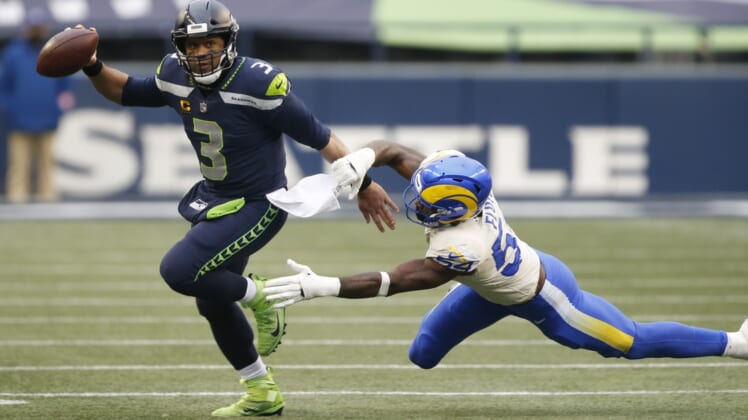 Seattle Seahawks quarterback Russell Wilson had a lot to say in two different interviews Tuesday and the big takeaways weren’t about him winning the Walter Payton Man of the Year Award over Super Bowl weekend.

Ultimately, the 32-year-old superstar is “frustrated” with all the hits he’s taking behind the Seahawks offensive line, and he wants more say in personnel decisions made by the team.

Further, Wilson gave an obtuse answer about how long he’ll be playing in Seattle, saying he “definitely” believes the Seahawks are fielding calls about him.

“I’m not sure if I’m available or not. That’s a Seahawks question,” Wilson said Tuesday on the “Dan Patrick Show.” “The reality of professional sports is things happen, things change. I’m not sure how long I will play in Seattle. I think hopefully it will be forever. But things change, obviously, along the way.”

But Wilson didn’t pull any punches when asked about the hits he’s taken.

“Like any player, you never want to get hit,” Wilson told reporters via Zoom on Tuesday. “That’s the reality of playing this position. Ask any quarterback who wants to play this game. … I think that the reality is I’ve definitely been hit. I’ve been sacked almost 400 times, so we’ve got to get better.

Wilson has been sacked 394 times in his career in the regular season, including 47 times last season, third most in the league. According to ESPN, the 394 are the most in a QB’s first nine seasons since the 1970 merger. Randall Cunningham is next at 366.

To that end, Wilson told Patrick he thinks “it helps to be involved more” in personnel decisions.

“I want to be able to be involved because at the end of the day, it’s your legacy, it’s your team’s legacy, it’s the guys you get to go into the huddle with and at the end of the day, those guys you’ve got to trust,” Wilson told Patrick. “I think if you ask guys like Drew Brees, Peyton Manning, you know even Tom, you know, I think that you saw this year how much he was involved in the process — I think that’s something that is important to me.”

Wilson has three years remaining on the $140 million extension he signed in April 2019, making him the highest-paid player in NFL history then. He’s now third behind Patrick Mahomes ($45 million per season) and Deshaun Watson ($39 million).