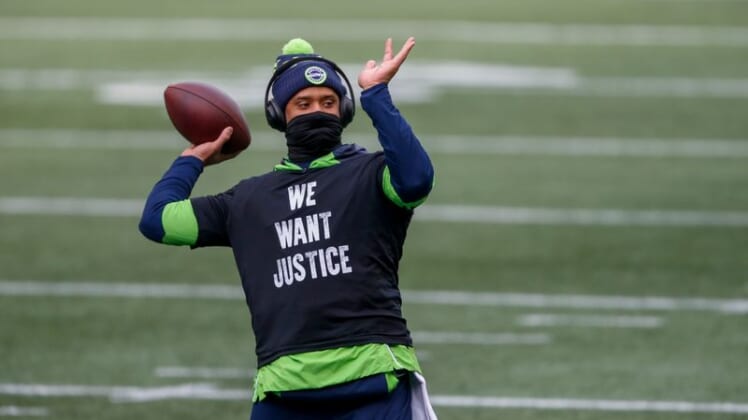 We’re now hearing some chatter about a potential Russell Wilson trade from the Seattle Seahawks. This aligns pretty well with an offseason that’s going to be filled with unprecedented quarterback movement.

Wilson is seemingly unhappy about Seattle’s inability to form an offensive line that can protect him on a consistent basis. Meanwhile, rumors persist that the Super Bowl-winning quarterback could be available.

If so, here’s a look at five ideal Russell Wilson trade scenarios.

Imagine Jon Gruden doing everything he can to bring the Super Bowl winner to Las Vegas. Imagine Wilson being the face of the Raiders’ organization in the desert metropolis. If the future Hall of Fame quarterback is indeed put on the trade block, Vegas might actually make the most sense.

The idea would be for the Raiders to build their offense around the generational quarterback. Given the presence of running back Josh Jacobs, tight end Darren Waller and wide receiver Henry Ruggs, Wilson would have a solid skill-position group to work with. In return, the Seahawks acquire Derek Carr as a stopgap option under center. They also pick up the Raiders’ first and second-round picks in 2021 as well as first-round picks in 2022 and 2023.

Would the Seahawks accept 2020 first-round pick Tua Tagovailoa as one of the centerpieces in a Russell Wilson trade? That’s the biggest question surrounding general manager John Schneider as we attempt to figure out what’s happening behind the scenes in the Pacific Northwest.

Read More: Are the Seattle Seahawks about to swing a Russell Wilson trade and implode?

What we do know is that Tua was seen as a potential franchise quarterback heading into the 2020 NFL Draft. He could also be on the trade block with Miami being in on Deshaun Watson. If Wilson were to become available, Miami could opt to offer up Tua as well as the No. 3 pick in April’s draft as two major pieces. Miami would then have to offer the second-round pick (36th) overall it got from Houston as well as a 2022 first-round selection. It might be something general manager Chris Grier considers.

It’s not a secret that Denver is looking to upgrade from Drew Lock under center. The team is apparently in on Deshaun Watson. It also showed interest in a Matthew Stafford trade ahead of him being dealt from the Detroit Lions to the Los Angeles Rams. Selecting No. 9 overall in April, the team might not be in position to add a top-four quarterback prospect barring a trade up.

New Broncos general manager George Paton will want to get his own quarterback in there. What better way to begin his tenure than bringing in one of the best quarterbacks of this generation? Denver can offer up that ninth pick, a second-round pick in 2021 and a first-round pick in 2022. From there, enticing a pass-rush needy Seahawks team with edge rusher Bradley Chubb could get it done. Oh, and Lock would head to Seattle in this hypothetical Russell Wilson trade.

Ben Roethlisberger and the Steelers are set to meet to discuss his future in Pittsburgh. The future Hall of Fame signal caller will have to restructure his contract in order to return. Even if the two sides come to an agreement (likely), Pittsburgh needs to find a long-term solution under center. It’s one of the biggest issues an otherwise respected general manager in Kevin Colbert has had in recent years.

Could Pittsburgh entice Seattle with Big Ben as a stopgap option? Imagine the optics here. An offseason that will be filled with quarterback movement we have never seen before including two Super Bowl signal callers being swapped for one another. It’s a fun idea. Meanwhile, Pittsburgh would also have to give up its first-round picks in 2021 and 2022, some more draft pick compensation and a young player. It could work.

Talk about a fun trade idea. Dallas places the franchise tag on Dak Prescott, only to trade him to the Seahawks as part of a package for Wilson. Obviously, this is not a likely scenario. It would be one of the biggest trades in modern NFL history. However, it could work out for both sides.

Seattle gets its quarterback of the present and future. Dallas adds an upgrade under center with owner Jerry Jones fully believing the team has an open Super Bowl window. The Cowboys also move the 10th pick in the 2021 NFL Draft to Seattle as well as more draft pick compensation to make this work. Because, at this point, anything seems to be possible around the gridiron world.