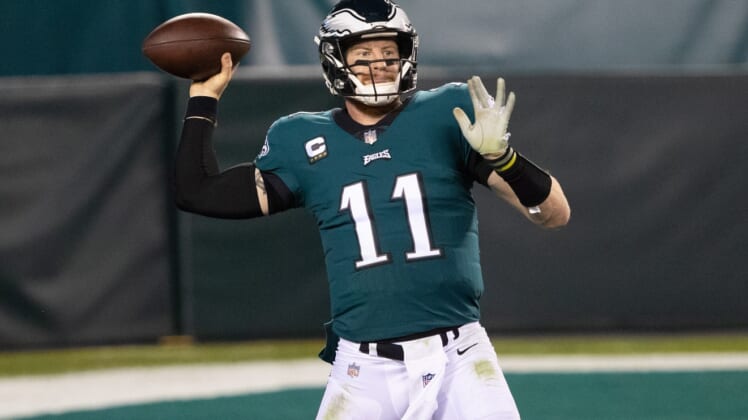 It remains to be seen if 2019 second-round pick Drew Lock is locked in (pun intended) as the Denver Broncos quarterback for the 2021 NFL season.

Lock, 24, looked darn good in limited playing time as a rookie before regressing terribly as a sophomore. The Missouri product heads into Week 17’s meaningless game against the Las Vegas Raiders tied with Carson Wentz for the league lead in interceptions with 15 despite having missed three games to injury.

Lock’s struggles as the Broncos quarterback is not necessarily surprising in that general manager John Elway has been among the worst front office heads when it comes to evaluating talent at this position since Peyton Manning retired following the 2015 season. Brock Osweiler and Paxton Lynch, anyone?

Elway’s issues finding a franchise quarterback aside, the Broncos are prepared to retain head coach Vic Fangio after a double-digit loss season. While Fangio has struggled to an extent transitioning to a head coach role after years as a defensive coordinator, he needs better play at quarterback. It’s in this that we start our evaluation of the Broncos quarterback situation.

This seems to be the likeliest scenario for the Broncos. Lock has a lot if hidden talent in that right arm. It did not go away overnight. It also must be noted that Pro Bowl receiver Courtland Sutton has missed all but one game this season due to a torn ACL and MCL. The two youngsters made sweet music with one another last year, combining on 19 receptions for 255 yards in Lock’s five starts as a rookie.

It’s in this that I envision Lock being involved in a Broncos quarterback competition next summer. Former Chicago Bears No. 2 pick Mitchell Trubisky could be an option should he move on from the Windy City in free agency. Given how much Elway likes his prototypical quarterbacks, veterans Ryan Fitzpatrick and Andy Dalton could also be options.

There’s really no clear-cut starters heading into free agency this coming March. Dak Prescott and Philip Rivers are highly unlikely to hit the open market. That leaves the Broncos quarterback situation unsettled should they opt to go the free agency rout to find a replacement for Drew Lock.

However, Elway has made a splash at this position in the past. The acquisition of Peyton Manning comes to mind first. Perhaps, the Cowboys move off Prescott and he lands in the Mile High City. Denver has a ton of options when it comes to lowering the team’s cap number in 2021. That could pave the way for the Broncos to meet Prescott’s asking price of $40-plus million annually.

Denver is currently slated to pick 13th overall in April’s draft. If the team opts to stand pat, it will not be able to land any of the top-three quarterbacks in that of Trevor Lawrence (Clemson), Zach Wilson (BYU) or Justin Fields (Ohio State). Although, there are other options here.

Standing at 6-foot-4 and weighing 224 pounds, North Dakota State’s Trey Lance is your perfect example of a quarterback Elway looks for. There’s also a chance the Broncos attempt to trade up into the top-three for one of those signal callers. While Lawrence might be a long shot, Wilson would make sense. Maybe the Jets are inclined to keep Sam Darnold after missing out on Lawrence. If so, they could be a trade partner.

Matt Ryan. Matthew Stafford. Carson Wentz. These are three proven quarterbacks that the Broncos could potentially chase after should they decide to move on from Lock. In particular, the 6-foot-5 Wentz seems to be an ideal quarterback for Elway to chase after.

All three would come at a different cost. However, it is being noted that Wentz could be had for pennies on the dollar after he was benched by the Eagles. San Francisco 49ers quarterback Jimmy Garoppolo could also be an option here, too.