NFL rumors: Eagles unlikely to get much in Carson Wentz trade 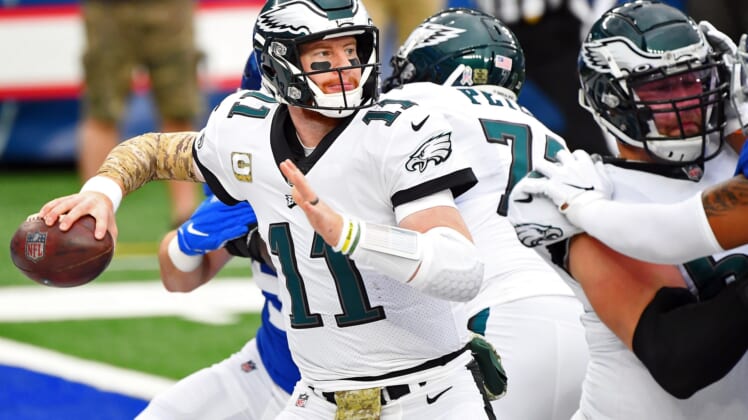 Now that the Philadelphia Eagles are officially eliminated from the playoffs, NFL rumors this coming offseason will surround a potential Carson Wentz trade.

Wentz was benched for rookie quarterback Jalen Hurts back in Week 14. While Hurts has lad the Eagles to just one win in three games, it’s rather obvious that he’s the future at this position in Philadelphia. The second-round pick threw two interceptions in Sunday’s loss to the Dallas Cowboys, but also tallied north of 410 total yards. He looks to be a true game changer under center for the Eagles.

As for Wentz, NFL rumors are already suggesting that the Eagles are going to look to move the struggling former No. 2 overall pick. If that is indeed the case, Philadelphia is not expected to get much for the high-priced Carson Wentz.

NFL rumors: Eagles unlikely to get much in Carson Wentz trade

Former Eagles president Joe Banner (1995-2012) just recently talked to the Philadelphia Inquirer about what the team might expect to get in a Carson Wentz trade. As plugged in as it gets from an NFL front office perspective, Banner painted a rather gloomy picture for Philadelphia in a potential deal this coming offseason.

“If you’re the Eagles right now, what you’re hoping is that there’s more than one team interested in him, or at least that you can create the perception that there is,” Banner said. “If you can do that, then you have a chance of getting a decent pick. And by decent I mean most likely a second-round pick and maybe something else thrown in. A first-round pick, considering the contract they’re taking on and the way he’s played recently, I’m not going to completely take it off the table. But it’s unlikely.”

As you might expect, there’s a lot of moving parts when it comes to a potential Carson Wentz trade. First off, he’s playing under an absurd four-year, $128 million deal that Eagles general manager Howie Roseman frontloaded. Said contract is not, by any means, team-friendly over the next couple seasons, as evidenced by Wentz’s cap hits.

Secondly, Wentz was absolutely atrocious under center prior to the Eagles finally pulling the plug on him back in Week 14. Despite having not started each of the past three games, the former No. 2 overall pick leads the NFL with 15 interceptions. The Eagles also failed to score as much as 30 points in any of his 12 starts.

NFL rumors: What might the Eagles expect to get in a Carson Wentz trade?

That’s the million-dollar question right now. Banner suggests a second-round pick and change. It could make sense for a contending team attempting to resurrect the quarterback’s career. After all, the above-mentioned cap hits don’t take into account a bonus the Eagles would have to pay out if they were to pull off a Carson Wentz trade.

Even then, there’s a fine line between giving up a second-round pick and yielding said selection while paying Wentz the remainder of his bloated contract.

NFL rumors have linked multiple teams to Wentz in a potential trade. That’s obviously under the guise that at least multiple squads will be bidding for his services. Right now, we’re not sure that’s going to be the case. If there’s no bidding war, the Eagles’ leverage goes down in a big way.

Prior to his struggles in 2020, Carson Wentz looked like the real deal after these Eagles traded up to the No. 2 overall pick for his services back in 2016. From 2017-19, he averaged 3,470 passing yards with 27 touchdowns and seven interceptions.

A potential Carson Wentz trade and NFL rumors surrounding it will depend heavily on how other teams view him on the market. It will also depend on who Philadelphia ultimately decides to replace Doug Pederson at head coach should they move on from him.

As noted above, there’s other factors here, too. That includes the Eagles’ confidence in Jalen Hurts as their starter and a potential new general manager to replace the embattled Howie Roseman.

For now, the trade market for Wentz doesn’t seem too robust.