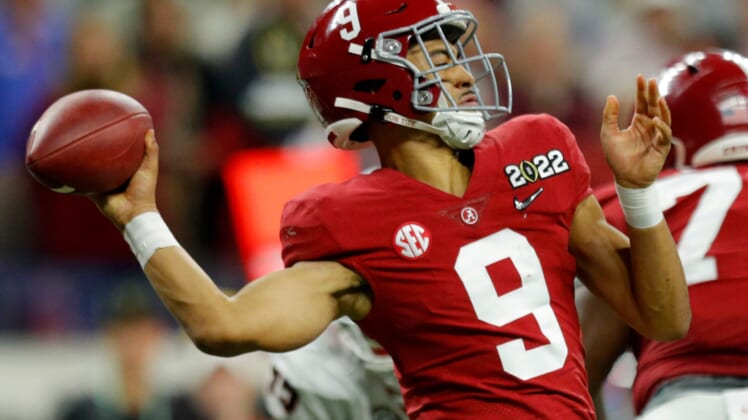 The 2021 college football season brought plenty of excitement, thanks to great play from quarterbacks such as Kenny Pickett, C.J. Stroud, and of course Heisman Trophy winner Bryce Young. But with Pickett entering the 2022 NFL Draft, a new crop of top college football quarterbacks have emerged.

Previewing the 2022 NCAAF season, here are the top 10 college football quarterbacks to keep an eye out for.

Playing for Mike Leach at Mississippi State, Will Rogers operates out of an Air Raid offense. This system suits him well, even in the SEC, where he threw the ball more than any other QB in 2021. Unfortunately, Rogers will have his work cut out for him, as the Bulldogs face the nation’s toughest schedule in 2022. If he can keep his head above water, Rogers can put his name on the map ahead of the 2023 NFL Draft.

Returning for his senior season came as a bit of a surprise, but it won’t be with the Arizona State Sun Devils, which judging by this video, is probably a good thing. Instead, Daniels will take his talents to LSU. The hope is for Daniels to rebound back to his freshman season when he posted 17 TD and just two interceptions. We’ll see how he adjusts to life making the jump from the Pac-12 to SEC play.

Simply put, Malik Cunningham is fun to watch thanks to his scrambling effectiveness. He’s one of, if not the top true dual-threat QB in college football, but he does most of his damage with his legs, shown by the 1,031 rushing yards he had in 2021. Make no mistake, Cunningham also has a big arm that can stretch the ball downfield.

One of the top college football quarterbacks a year ago based on efficiency, Grayson McCall only figures to improve heading into what likely will be his final collegiate season. Sure, Coastal Carolina may not be a powerhouse, but McCall has shown an ability to take care of the football, shown by having two seasons with just three interceptions thrown, while tossing over 25 touchdowns each season.

Getting a chance to put the team on his back, Jake Haener did just that for the Fresno State Bulldogs in 2021. Now he’ll look to build on his success as a senior, returning for one more year. Haener, while undersized at 6-foot-1, could become a legitimate 2023 NFL Draft prospect, but not likely one expected to go on the first or second day.

While his college career has been a bit of a whirlwind already, now Texas QB Quinn Ewers is one of the most-hyped QB prospects since Trevor Lawrence. Ewers didn’t get much of a chance at Ohio State, receiving just two snaps, but that’s expected to change with the Longhorns. Technically he’s in a battle with Hudson Card, but it would be a disappointment if Ewers didn’t grab ahold of the starting gig in his home state.

It won’t surprise anyone if Spencer Rattler can put it all together in his junior season at South Carolina. While he did lose his job to Caleb Williams a season ago, Rattler still finished with a 74.9% completion rate and possesses big-play ability. Some had projected Rattler to be the top overall pick in the 2022 NFL Draft prior to the start of his sophomore year, now he’ll look to get back on track with the Gamecocks.

One of the strangest stories of the 2021 college football season was the Oklahoma Sooners’ quarterback situation. First Spencer Rattler appeared primed to be one of the nation’s top college football quarterbacks, but early struggles led to Caleb Williams getting a shot. Now he’s followed Lincoln Riley to USC, where the pair will look to continue their success in 2022.

C.J. Stroud entered his redshirt freshman year at Ohio State with a lot of hype surrounding him. He experienced some early growing pains as many young quarterbacks do, but he eventually settled down, even breaking a Buckeye record for most passing yards in a single game with 573 in the Rose Bowl. Despite losing Chris Olave and Garrett Wilson to the NFL Draft, Stroud will still have a great season. Having Marvin Harrison Jr. won’t hurt either.

Bryce Young quickly took the nation by storm in his first season as a starter with Alabama, winning a Heisman Trophy for his effort. In doing so, Young became the first Alabama QB to win the prestigious award. Heading into his junior year, Young is only expected to be even better.

After his incredible season, we have Young as one of the very best college football quarterbacks in the nation.