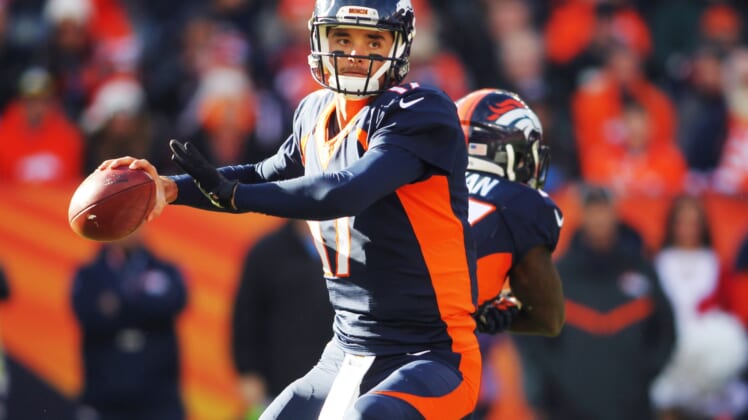 With just a few days to come to an agreement on a long-term contract before the start of free agency, the Denver Broncos and quarterback Brock Osweiler are currently engaged in conversations.

Despite Peyton Manning “leading” the team to the Super Bowl last month, it’s readily apparent that Denver’s first choice to start next season is Osweiler.

The one big issue here is that Denver only boasts sole negotiating rights with the soon-to-be free agent until March 9, at which point other teams can start talking to the young signal caller.

This one report from The Denver Post suggests that the Broncos are offering Osweiler more than the $12.3 million Nick Foles is slated to earn for the Los Angeles Rams next season.

That arbitrary value seems to be the floor right now. The report doesn’t indicate how much more the offer is than the $12.3 million.

Based on the quarterback-needy teams around the NFL and an increased salary cap, Osweiler will likely earn more on the open market. Of course, we have no real idea what the offer is.

It could very well be closer to the $18 million Sam Bradford agreed to with the Philadelphia Eagles. In reality, that would likely have to be where the offer is in order for Osweiler to join Bradford in securing a long-term contract prior to free agency.

While it seems to make sense that the Broncos are putting off any final decision regarding Peyton Manning until their situation with Osweiler is solved, it’s important to note that the future Hall of Famer’s $19 million salary for 2016 becomes guaranteed on Tuesday.

If the Broncos were to release him before then, they would save that amount under the cap. Considering they are currently over the cap after placing the franchise tag on Von Miller, it stands to reason that this is imminent.

The only real issue here is with Osweiler. If the Broncos fail to agree to a long-term deal with the signal caller before free agency and release Manning, the defending champs could be put in a situation where they are looking for a quarterback in a weak veteran market.