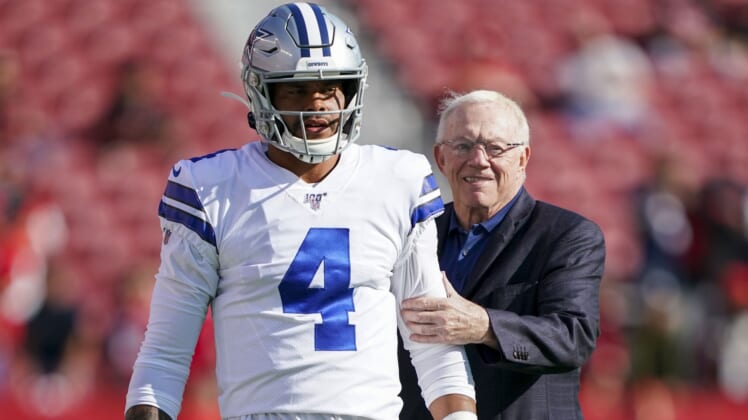 The Dallas Cowboys entered the 2020 NFL season with Super Bowl expectations. With a disastrous year drawing to a close, Jerry Jones now faces a monumental offseason that will be pivotal in determining his team’s future.

As the team’s 2020 season finishes, it will be remembered as nothing short of a disaster in Dallas. Between heartbreaking injuries, baffling coaching decisions and constant disappointment, the Cowboys fell massively short of expectations this year.

While this club will enter the 2021 NFL Draft with a top-five pick and plenty of exciting talent, there is a lot of work to be done. If Jerry Jones fails to make the right moves, a lost year could further set this franchise back.

Let’s dive into the Dallas Cowboys offseason and how they should approach Dak Prescott’s contract, the 2021 NFL Draft and everything in between.

Mike McCarthy conned Jerry Jones and the Dallas Cowboys. In his year away from football, McCarthy claimed he used it to become connected with analytics and spent countless hours watching every Cowboys’ snap in 2019. At his introductory press conference, he admitted that was a lie.

That would be a moment fans could look back on and laugh at, if this 2020 season wasn’t so disastrous. Instead, with every baffling decision McCarthy makes and for every week defensive coordinator Mike Nolan is employed, it’s all a reminder.

This has been a year to forget for McCarthy. Routinely blasted by NFL fans for baffling decisions made each game, even his play-calling isn’t saving him. On top of that, there are already disgruntled voices in the locker room and a feeling that McCarthy hired Nolan as a favor.

Yet, McCarthy will return to Dallas in 2011. An organization that has arguably shown too much loyalty to head coaches in recent years, won’t admit yet that it made the wrong hire. As a result, McCarthy will carry his 15-25-1 record over the past 41 games into a longer leash.

One thing is for certain, Dallas must fire Nolan. There was a reason he hadn’t been a defensive coordinator since 2014, when the Atlanta Falcons were atrocious defensively.

Finding a new defensive coordinator is the first change that must be made this offseason. But, there is plenty of work left to do.

Whether or not Jerry Jones is willing to admit it, caving to Ezekiel Elliott was a monumental mistake. The $90 million albatross is an anchor for this team financially. To make matters worse, with more than 1,614 touches in his career, the 25-year-old’s body is starting to slowly deteriorate.

Entering Week 15, Elliott ranks as Pro Football Focus’s 51st-highest graded running back. While some will point fingers toward a depleted offensive line, the stats still speak volumes. Elliott ranks 13th in runs of 10-plus yards, 39th in average yards after contact (2.65) and 45th in yards per attempt (3.9) this season.

Carrying a $13.7 million cap hit in 2021, a number that will rise in the coming years, Elliott is an unnecessary weight on this roster. He is still talented enough to be a starting running back and some team may think their situation is right for him. That’s exactly why Elliott should be traded this offseason.

Given his contract, Dallas would likely be looking at a 2021 fourth-round pick in return for him. While that’s far from ideal, the organization should view the real gain as dumping the contract.

In his place, Tony Pollard can step in as the starting running back for the 2021 season. Across 28 games, he is averaging 4.9 yards per carry and has shown some explosive running ability. Equally important, he can catch the football out of the backfield. While there is a gap between Elliott and Pollard, the 23-year-old running back is a far greater value for Dallas.

Related: Top players who could be cap casualties this offseason

Simply put, the Dallas Cowboys failed by not signing Dak Prescott to a contract extension earlier. In 2018, the organization prioritized Elliott over its franchise quarterback. This past offseason, Dallas hit Prescott with the franchise tag and low-balled him on a long-term deal.

Prescott went down with a devastating leg injury this season, leading to some questionable comments from Jones months later. In his absence, it was evident that Prescott is an outstanding quarterback and covered a lot of holes on this offemse.

While the Cowboys could place the franchise tag on Prescott for the second time this offseason, which could cost around $37.5 million, they can’t waste more time. Months of griping over the length of the deal and where Prescott’s salary should rank among his peers, need to be put aside.

Given the deal Deshaun Watson landed, the Cowboys have to cave to Prescott with a four-year contract.

Prescott’s money will eat into a large chunk of the team”s 2021 cap space. While they are $3.4 million below the cap right now, per Over the Cap, Dallas can roll over much of its existing $27 million in cap room to next season.

When paired with a few other moves, the Cowboys could be in an acceptable cap situation.

There are little things the Cowboys can do this offseason to maneuver into financial flexibility. With Prescott signed, Dallas could fill out its roster and be confident knowing its franchise quarterback is locked in for the next four seasons.

Given the financial situation, adding talent in the 2021 NFL Draft will be the priority for the Dallas Cowboys. Thanks to this disastrous season, this team is in a great position to land a top-five pick. It could create the perfect trade-down opportunity on draft night.

Sitting at the No. 5 spot, it’s the perfect position to trade down with a team desperate for a quarterback. Using The Draft Network’s mock simulator, the Chicago Bears offered their 2021 first-, second- and fifth-round picks along with their 2022 first- and third-round selections to move from No. 16 to the fifth spot.

Horn is a pro-ready cornerback with the physical skills and size to match with the best the NFL offers at wide receiver. The 21-year-old will need to iron out the finer points of his game and being dependent on getting physical with receivers will draw some flags early in his NFL career. With that said, he can start opposite Trevon Diggs and bring some stability at the outside corner.

Dallas needs to start thinking about its future at offensive tackle. Tyron Smith’s season-ending neck injury showed this team’s lack of depth and the 30-year-old’s declining durability. Leatherwood, who can start at either tackle spot, offers the physical tools to be a quality starter at the next level. He can spend the 2021 season learning from Smith and La’el Collins, ready to take over in 2022 or if injuries occur next season.

Next, with the additional second-round pick acquired from Chicago, we bolster the edge in Dallas. Phillips, the former No. 1 recruit in the 2017 class, has overcome a lot to get here. He medically retired in 2018 due to concussions, but found his way back to football with the Miami Hurricanes. Phillips exploded this season, racking up 15.5 tackles for loss and eight sacks.  At 6-foot-5 and 258-pounds, with gifted athleticism, he could be a force with the right coaching.

Safety is a position that Dallas can’t ignore. Holland, who opted out of the 2020 college football season, was once viewed as a potential first-round pick. There’s plenty of versatility to the 6-foot-1 safety’s game, reliable against the run and capable of dropping back into man coverage. Holland is absolutely a piece this defense is missing.

Entering Week 15, the Cowboys allow the highest yards per rush (5.1) in the NFL. That’s a glaring problem, one that Shelvin can help with. LSU’s 346-pound defensive tackle is a bully in the interior and will stuff up running lanes.

With Ezekiel Elliott gone, we also give the Cowboys a running back to pair with Pollard. Williams exploded for 1,140 rushing yards and 19 rushing touchdowns for the Tar Heels this season, averaging 7.3 yards per rush. The 5-foot-10 back is also an all-purpose weapon. He could create an exciting 1-2 punch with Pollard in 2021 and beyond.