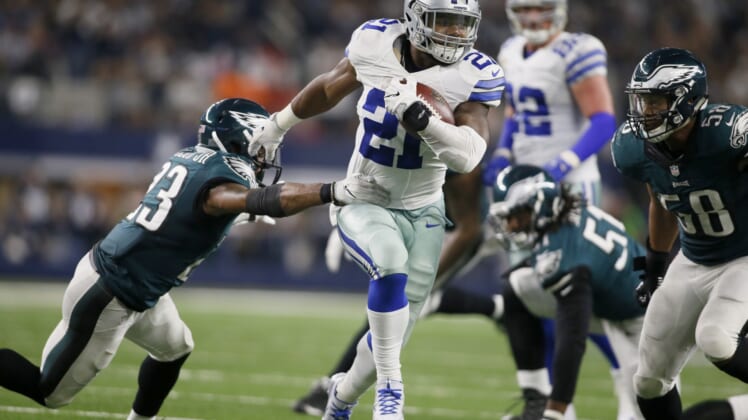 To say that Dallas Cowboys running back Ezekiel Elliott has not enjoyed a great 2020 NFL season would be an understatement. Much like the rest of his struggling squad, Elliott has not performed up to par.

The high-priced former All-Pro performer is averaging a career-low 3.9 yards per attempt. He’s also put up just 707 rushing yards in 11 games while fumbling at an alarming clip (six times).

A lot of people questioned Dallas when it handed Ezekiel Elliott a record-breaking six-year, $90 million extension back in September of 2019.

Running backs are not nearly as valued as other positions right now. That’s primarily true when compared to quarterbacks. Despite Elliott’s surface value to the Cowboys, his contract is a handcuff.

Look at Elliott’s cap hits over the next several seasons.

Dallas does have an out on the Ezekiel Elliott contract that would result in a mere $6.7 million dead cap hit following the 2022 season.

In comparison to the statistical decline we’ve seen from Elliott over the past couple years, and this is not great news.

Given the Cowboys’ cap issues and the need to either extend Dak Prescott or find another quarterback, there’s a chance the team looks to trade Ezekiel Elliott this coming offseason.

For Dallas, that’s magnified by the fact that 2019 fourth-round pick Tony Pollard has been extremely effective and could be a cheaper long-term alternative. Pollard has put up 928 total yards and is averaging 5.2 yards per rush during his young career.

If the Cowboys were to trade Ezekiel Elliott, the question then becomes what teams might show interest. How would a trade look in terms of compensation? We check in on that below.

Ezekiel Elliott traded to the Buccaneers

Ezekiel Elliott traded to the Chiefs