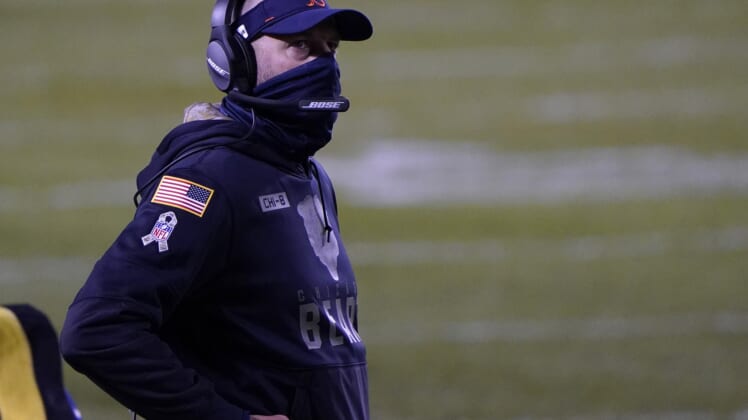 Chicago has now lost six consecutive after starting the season 5-1. It has been an unmitigated disaster on offense, which doesn’t speak well to embattled head coach Matt Nagy. Could this lead to Nagy being fired here soon? Speculation has ramped up indicating that could be the case.

“If the Chicago Bears conduct a coaching search next month — and numerous league sources have indicated it is far more likely than not that will be the case — Northwestern head coach Pat Fitzgerald will be at the top of their wish list,” Jason La Canfora of CBS Sports reported Sunday.

The NFL insider went on to note that billionaire minority owner Pat Ryan, who owns a 10% stake in the organization, is a proponent of the Bears hiring Fitzgerald. Ryan is a Northwestern alum, which shouldn’t make this piece of Bears news too surprising.

The 46-year-old Fitzgerald has been bandied about as a potential NFL head coach. A former linebacker at Northwestern, Pat Fitzgerald has coached that program since all the way back in 2006.

Fitzgerald has led the Wildcats to a combined mark of 104-80. That includes three consecutive bowl wins and nine bowl appearances. Thus far this season, Northwestern boasts a 5-1 record and is ranked just outside of the top-10 in the Associate Press’ most-recent top-25.

A native of Illinois, Fitzgerald has in the past pushed back against making a move to the NFL. Whether that changes with the Bears potentially looking for a new head coach remains to be seen.

That’s the million-dollar question right now. Seen as a genius on the offensive side of the ball dating back to his days with the Chiefs, Nagy has not lived up to that reputation thus far in Chicago.

At this point, it’s hard to envision any Bears news coming out over the final four weeks of the season that suggests Nagy will be back in 2021. In fact, it would not be a surprise if the head coach and general manager Ryan Pace were given their walking papers before the season comes to a conclusion.