NFL Free Agency: Star players who could be surprise cuts in 2021 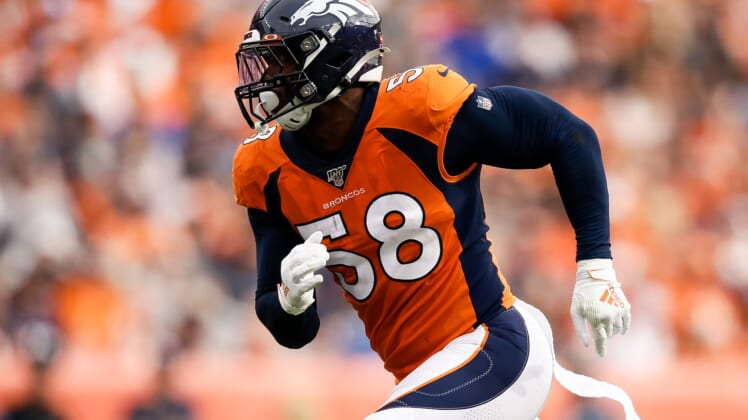 NFL free agency: While the NFL offseason is months away, teams are already making preparations for a difficult offseason. With the COVID-19 pandemic keeping dramatically reducing attendance and stadium revenue in 2021, the 2021 offseason could be brutal for many players.

While it’s a far better outcome than the worst-case scenario, the cap figure plummeting by $40-plus million per team, it is still a sharp reduction from the NFL’s current salary cap ($198 million). As a result, many anticipate a difficult offseason that could see many recognized names released as cap casualties.

Let’s take a look at star players who could be surprise cuts in 2021.

NFL free agency: Top players who could be cap casualties this offseason

The No. 2 overall pick in the 2011 NFL Draft, Miller has been a star since arriving in Denver. Across nine seasons with the Broncos, he racked up 216 quarterback hits, 135 tackles for loss and 106 sacks. On top of that, he won Super Bowl MVP and has earned eight Pro Bowl selections, proving himself as one of the best pass rushers in the last decade.

Unfortunately, his time in Denver could be nearing its end. The Broncos are projected to be only $5.2 million under the cap next season, per Over the Cap. With star safety Justin Simmons due for a contract extension, that figure will inevitably be even lower. The Broncos would create $18 million in cap space by cutting Miller and reports indicate his days with the team are likely over. While it would be the end of an era, Miller should have no shortage of suitors in NFL free agency.

The Green Bay Packers made huge moves in the 2019 offseason, signing Adrian Amos, Za’Darius Smith and Preston Smith to huge contracts. Together, the Smiths teamed up for one of the NFL’s most dominant edge-rushing combos last season. But, Preston Smith hasn’t played nearly as well in 2020.

Green Bay’s 6-foot-4 edge rusher has just four sacks and 13 quarterback hurries on the season, drawing below-average grades (54.1) from Pro Football Focus. The Packers are estimated at $23 million over next season’s projected salary cap ($175 millIon) and will need to make cuts. Preston Smith looks like a cap casualty, with $12 million in cap savings as a post-June 1 cut.

Chicago kept Fuller away from the Packers in 2018, matching the four-year offer worth $56 million. The move paid off, with the 6-foot corner earning first-team All-Pro honors in 2018 and a Pro Bowl selection this past. After consecutive years of locking down Chicago’s No. 1 corner spot, Fuller has taken a step back in 2020.

Fuller grades as PFF’s 49th-best cornerback this season, drawing poor marks for his coverage and effort in run defense. For a player carrying a $20 million cap figure next season, this is the worst time to have a down year. The Bears would create $11 million in cap space by cutting Fuller, needed financial flexibility for a team that will be $7 million over the salary cap.

When Garoppolo has been on the field for the 49ers, he hasn’t quite lived up to the massive contract he signed with San Francisco. Paid like a high-end quarterback capable of making throws that can win a Super Bowl, Jimmy G’s 7/5 TD/INT ratio and 92.4 quarterback rating leave fans wanting more.

There are increasing doubts regarding Garoppolo’s future in San Francisco. For one, he puts a low ceiling on Kyle Shanahan’s offense. Equally as bad, he carries a $26.9 million cap figure for a team that can’t afford to waste money. With Richard Sherman and Trent Williams among San Francisco’s prioritized free agents to re-sign, cutting Garoppolo to free $24.1 million in cap space makes a lot of sense.

New Orleans has taken a win-now approach with Drew Brees under center and for good reason. However, every bill has to be paid and years of pushing back owed money to future seasons add up. When the Saints enter the 2021 offseason, they will be $99.6 million over the salary cap.

Even if Brees retires, per OvertheCap, the Saints will only see a $23.925 million cap savings. So, the team will have to move on from key starters on both sides of the ball. It will likely start with Jenkins, the team’s best cornerback in 2020. With a $14.2 million cap figure in 2021 and a potential $10 million in savings with a post-June 1 cut, releasing Smith and sending him into NFL free agency seems inevitable.

The Eagles are in a familiar situation. With estimated cap liabilities of $265 million in 2021, Philadelphia would be more than $88 million over the salary cap. There clearly isn’t enough talent on the roster to win a Super Bowl and even competing for the NFC East seems unlikely. In what could be an offseason full of change, Graham could be a cap casualty.

There’s no denying his talent. The 32-year-old is still an excellent pass rusher, racking up seven sacks and 29 quarterback hurries entering Week 14. With that said, the Eagles can’t afford the $17.93 million cap hold he has in 2021. By designating him as a post-June 1 cut, the Eagles will create $13 million in cap space.

Pittsburgh’s win-now approach is similar to the Saints, leading to another offseason of change for a Super Bowl contender. The Steelers could lose Bud Dupree, Alejandro Villanueva, Juju Smith-Schuster and Avery Williamson to NFL free agency this offseason. For a team estimated at $27 million over the cap next season, cuts must come.

Haden might be one of the first to go. A three-time Pro Bowl selection, most recently in 2019 with the Steelers, he has been a steady cover corner in Pittsburgh. While he is solid and brings veteran experience, that’s not worth the $15.575 million cap hit he is due in 2021. Cutting Haden will create $5.6 million in cap space, even more if he is designated a post-June 1 release.

Just when the New York Jets thought they landed Barr, Minnesota swooped in and re-signed him with a $67.5 million contract. After making the Pro Bowl in four consecutive seasons (2015-;18), the 6-foot-5 linebacker hasn’t exactly lived up to his contract. In 2019, he received a 60.6 overall grade from PFF, one of the lowest marks in the league. Things have gotten even worse this season (47.5 grade) for the former UCLA star. With the Vikings over the NFL salary cap in 2021, cutting Barr and creating $7.2 million in cap room seems likely.

Smith has been a pillar for the Dallas Cowboys since 2011, with the team hitting a home run with the No. 9 overall pick. Injuries have limited him in recent years, but a resume with seven Pro Bowl selections and being named to the NFL 2010s All-Decade Team speak volumes. With that said, there’s a real scenario where his time in Dallas ends this spring.

If the Cowboys land the No. 3 pick in the 2021 NFL Draft, they could easily snag Penei Sewell. He is an elite prospect and could start in Week 1, providing strong play as a rookie. Meanwhile, Dallas will be strapped for cap space and still needs to sign Dak Prescott to a new contract. Designating Smith as a post-June 1 clears $10.5 million off the books. While it would be an unfortunate end to his time in Dallas, injuries have played a huge role in that.

No one expected Smith to be here. The chronicles of his remarkable comeback tell the story of his determination to overcome a gruesome injury that nearly took his life. Even making it on the Washington Football Team’s active roster this season was an accomplishment, but Smith is now the starter for a club with playoff aspirations.

Washington wants to bring Smith back in 2021. He brings stability to the position, a veteran presence in the locker room and can mentor a young quarterback. With that said, there’s no chance he is back with WFT at the current $23.3 million cap number. Cutting Smith creates $14.7 million in cap space. Once that move is made, Ron Rivera and Co. can work on signing Smith to a smaller contract if he wants to return.