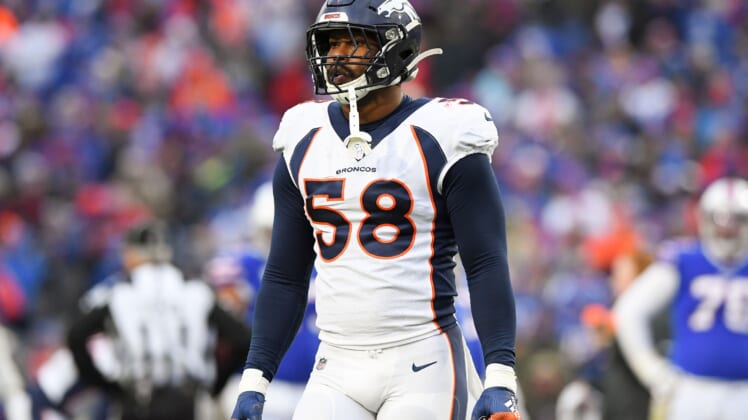 Broncos rumors: Von Miller has been a force off the edge for the Denver Broncos since he entered the league. After a decade with the team, though, Miller’s tenure in Denver could be drawing to a close.

Miller, the No. 2 pick in the 2011 NFL Draft, has missed the entire 2020 season following surgery for a dislocated tendon. While the 31-year-old will be under contract for the 2021 season, he might not play it out for the Broncos.

The Athletic’s Lindsay Jones said Friday in a mailbag that she expects Miller won’t return to the Broncos next season. Despite all the All-Pro edge rusher’s incredible contributions, the only way the team would likely bring him back is at a significantly reduced salary.

It’s an outcome that will likely be experienced by many talented veterans around the league. Due to the COVID-19 pandemic and largely empty stadiums, the NFL could lose more than $2 billion in revenue this year.

While efforts are being made to limit the financial burden that will impact the 2021 season, with new television contracts being negotiated, the NFL salary cap will drop next season. Set at $198.2 million this year, early estimates indicate it will be $175 million in 2021.

It would leave Denver with less than $10 million in cap space, which isn’t remotely enough to re-sign star safety Justin Simmons and offensive tackle Garett Bolles. So, the Broncos will need to cut several veterans this offseason.

Miller has been sensational since landing in Denver. Across nine seasons, he has 216 quarterback hits, 135 tackles for loss and 106 sacks. During that stretch, he won Super Bowl MVP (Super Bowl 50) and earned eight Pro Bowl selections.

Cutting Miller would create $18 million in cap space, money that could go towards new contracts for Simmons and Bolles.

Denver could certainly make an effort to re-sign Miller after that. Entering his age-32 season, though, MIller might prefer to land with a contender for a shot at another Super Bowl ring.