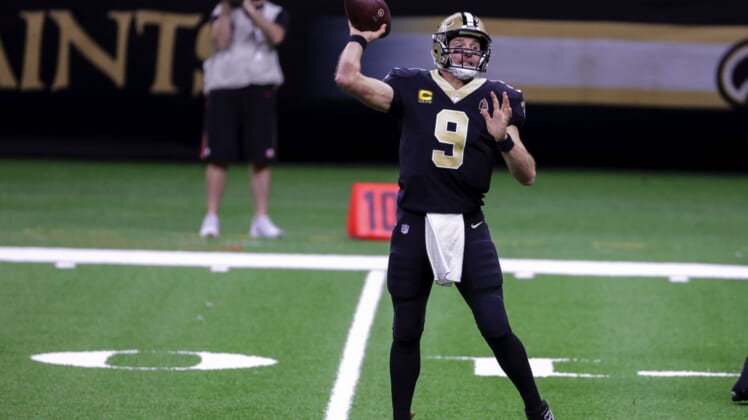 New Orleans Saints rumors: The New Orleans Saints are rolling after starting the season 1-2 , now sitting atop the NFC entering Week 14. While the team is in win-now mode with Drew Brees, plenty of considerations are also being given to the future.

The Saints went all-in on the 2020 season this offseason, bolstering their roster with key additions on both sides of the ball. The team is playing well once again and one of the favorites to reach Super Bowl LV, but there are lingering questions about the team’s and Drew Brees’ future.

Let’s dive into the latest New Orleans Saints rumors, examining the latest impacting the 2020 season and the team’s offseason plans for 2021 and beyond.

For weeks, Drew Brees and the New Orleans Saints have targeted Week 15 for a return. After missing four games with 11 fractured ribs and a collapsed lung, everyone thought he could recover in time to face the Kansas City Chiefs.

According to ESPN’s Adam Schefter, there is no timetable for Brees to return and the Saints are preparing for Taysom Hill to start in Week 15. New Orleans isn’t willing to let Brees return until he throws without limitations and has the full range of motion, which he didn’t show while throwing this week.

It’s a bit troublesome for the Saints. While they will host the Chiefs at the Mercedes-Benz Superdome, the raucous crowd won’t be there due to COVID-19 guidelines. It’s a factor that significantly plays into Kansas City’s favor to begin with.

If this Week 15 battle turns into a shootout, a potential Super Bowl LV preview, the Chiefs would have an even bigger advantage. While Hill has done well as a passer against the Atlanta Falcons, there are limitations to his game and he puts a ceiling on this passing attack.

The Saints also don’t have the luxury of breathing room in the NFC. While they currently hold the No.1 seed, the Green Bay Packers are just one game back and hold the tiebreaker thanks to a head-to-head victory.

If the Packers win out and New Orleans loses to the Chiefs, Green Bay will land the No. 1 seed and receive the lone bye week in the NFC. Meanwhile, the Saints would play in the Wild Card round. It would make the road to the Super Bowl a lot more difficult for Drew Brees and Co.

When Brees went down with 11 fractured ribs, the Saints were forced to turn to their backup quarterback for the second year in a row. This time around, despite many anticipating Jameis Winston would be the fill-in starter, Taysom Hill became QB1 in New Orleans.

Before taking the field for his first start, reports suggested multiple players preferred Winston over Hill. However, head coach Sean Payton wanted to prove that his overwhelming confidence in Hill would be proven right.

The Saints are undefeated in Hill’s first three NFL starts. During that stretch, he completed 54-of-76 passes (71.05%) with 543 passing yards, a 2/1 TD/INT ratio and a 94.4 quarterback rating. Additionally, Hill has racked up 176 rushing yards and four touchdowns over that stretch.

According to The Athletic’s Jeff Duncan, Hill’s three-game performance has bolstered the organization’s confidence that he is the heir apparent to Drew Brees.

While Brees hasn’t announced that the 2020 season will be his last or indicate he will retire, many around the league expect him to step away following the 2020 season.

Payton indicated in March that this would be Brees’ final season. A short time later, the future Hall of Fame quarterback signed a deal with NBC to become the heir to Cris Collinsworth for the Sunday Night Football gig.

The Saints talked Hill up long before the season, with reports first emerging in May that Payton viewed him as the team’s long-term quarterback. New Orleans later signed him to a lucrative extension, making him the highest-paid backup quarterback in the NFL.

Payton and the Saints might be right about Hill. However, it’s worth thinking about his three-game stretch more critically. Of his 543 passing yards during that stretch, 465 came against one of the NFL’s worst defenses (Atlanta Falcons). Against the Denver Broncos, a top-20 defense, Hill completed 9-of-16 attempts for 78 passing yards and one interception.

If Hill is the long-term starter, it makes the massive contract awarded to Alvin Kamara even worse. Kamara is an explosive runner, but is even more exceptional catching passes out of the backfield. After catching 67 passes in nine games, he has caught just three across Hill’s three starts. If Hill keeps ignoring his All-Pro back, New Orleans is wasting a huge chunk of its cap space.