San Francisco 49ers rumors: Carson Wentz floated as a possibility for next season 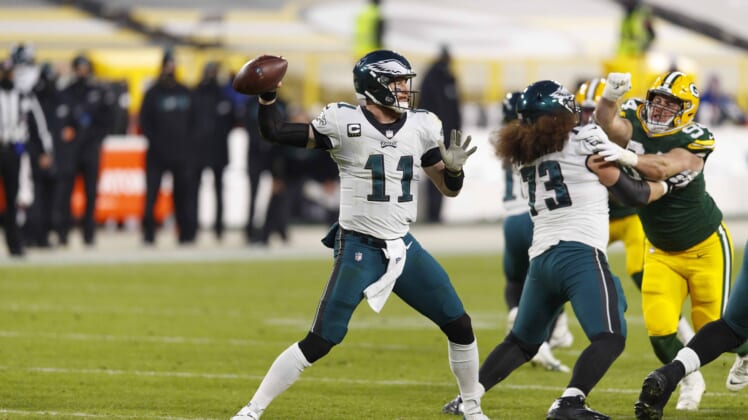 San Francisco 49ers rumors recently have included the possibility that the defending NFC champions might move on from embattled quarterback Jimmy Garoppolo. It’s somewhat of a shock given that Garoppolo is less than a year removed from leading San Francisco to the Super Bowl.

Even then, there’s numerous issues surrounding Garoppolo and the 49ers. Chief among them, his inability to stay healthy. For the second time this season, Garoppolo is sidelined with a high-ankle sprain. Remember, he also missed the vast majority of the 2018 season with a torn ACL.

This has led to speculation that head coach Kyle Shanahan and Co. might look to replace Garoppolo with either a veteran option or a rookie next season. Who could be the options?

“If the Niners want to make a change at quarterback, though, they have the flexibility to create significant short-term cap space by cutting Jimmy Garoppolo,” ESPN’s Bill Barnwell noted. “Releasing the oft-injured Garoppolo would free up $23.6 million in cap space in 2021, a close match for the $25.4 million cap figure Wentz would occupy after being traded.”

We focused on how the 49ers could save a nice amount of cash by either trading or releasing Garoppolo. Given his inability to both stay healthy and prove himself as a franchise quarterback, that could potentially be in the cards.

As for the 27-year-old Carson Wentz, he was benched in favor of Jalen Hurts last week. Hurts responded by leading Philadelphia to a shocking win over the New Orleans Saints. A Pro Bowler back in 2017, Wentz once looked to be among the best young quarterbacks in the game. In fact, he tallied 10,409 passing yards with 81 touchdowns against 21 interceptions from 2017-19. Wentz has, however, struggled big time this season. He enters Week 15 leading the NFL with 15 interceptions.

Acquiring Wentz would be a way for 49ers head coach Kyle Shanahan to find himself a reclamation project in the form of a pure drop-back quarterback he values, much like what we saw with Matt Ryan in Atlanta. Whether Wentz would even be an upgrade over Garoppolo remains to be seen. With that said, we’re going to hear a lot of San Francisco 49ers rumors surrounding the quarterback position once they finish up shop on a disappointing and injury-plagued 2020 NFL season.

ESPN media personality Marcus Spears, a former member of the Dallas Cowboys, indicated recently that Prescott should want out of dodge. He pointed to the 49ers as a potential landing spot.

We’re going to hear a ton of San Francisco 49ers rumors linking the team to proven veteran quarterbacks should they opt to move on from Garoppolo. The likes of Carson Wentz and Matt Ryan come to mind first.

With that said, Prescott would be an intriguing option for San Francisco. Even after suffering a devastating ankle injury back in Week 5, Prescott would be seen as a dramatic upgrade from Garoppolo. In fact, it wouldn’t even be that close.

We’re talking about a quarterback that is completing 66% of his passes for 6,758 yards with 39 touchdowns and 15 interceptions while adding six rushing scores in his past 21 starts. Garoppolo’s numbers don’t come close to adding up to that.

There’s a strong argument that can be made in Garoppolo’s favor. He put up one of the best statistical seasons for a quarterback in franchise history in 2019, completing 69% of his passes for nearly 4,000 yards with 27 touchdowns and 13 interceptions.

From a team-wide perspective, Garoppolo has proven to be a winner. Since joining San Francisco, he boasts a 22-8 regular-season record as a starter. All of the 49ers other starting quarterbacks are a combined 6-24 since the start of the 2017 season. That doesn’t seem to be a coincidence. It’s also important to note Garoppolo is due to count a mere $26.4 million against the cap in 2021, making him the 11th highest-paid quarterback in the NFL.

San Francisco 49ers rumors: Why move on from Jimmy Garoppolo?

This is somewhat simple. Despite his numbers, the 29-year-old Garoppolo has failed to reach elite status since San Francisco acquired him from New England back in 2017. In fact, the veteran has regressed this season.

San Francisco can also get out from Garoppolo’s contract, via a trade or release, while saving nearly $24 million against the cap this coming March. Given the team’s less-than-stellar cap situation, that could make sense.

The 49ers might be interested in acquiring Prescott. Heck, 25 teams around the league would love to have him. In no way does it make this even remotely possible.

As of right now, the 49ers are slated to have about $22 million in cap room this coming offseason. Of course, that’s dependent on what the cap actually is due to the economic downtick COVID-19 has created around the league. Even then, it’s not a ton of cash given that the likes of Richard Sherman and Trent Williams are slated to become free agents.

Even if the 49ers were to save nearly $24 million by trading or releasing Garoppolo, it’s hard to envision the team being able to dole out the $40 million or so Prescott is demanding on a long-term deal.

This doesn’t even take into account Prescott’s current situation with the Cowboys. Despite some questionable comments about his quarterback in recent days, owner Jerry Jones seems committed to the former mid-round pick. Dallas could very well place the franchise tag on Prescott once again this offseason, forcing other teams to offer up a plethora of picks in a potential trade.

Again, that’s problematic for the 49ers. They are without a third-round pick in the 2021 NFL Draft stemming from the Trent Williams trade last spring. San Francisco also made just five picks this past April. That’s not a way to build a team in today’s NFL.

If 49ers general manager John Lynch can navigate through those issues, Prescott to the Bay Area could very well work. It’s something to keep an eye on.