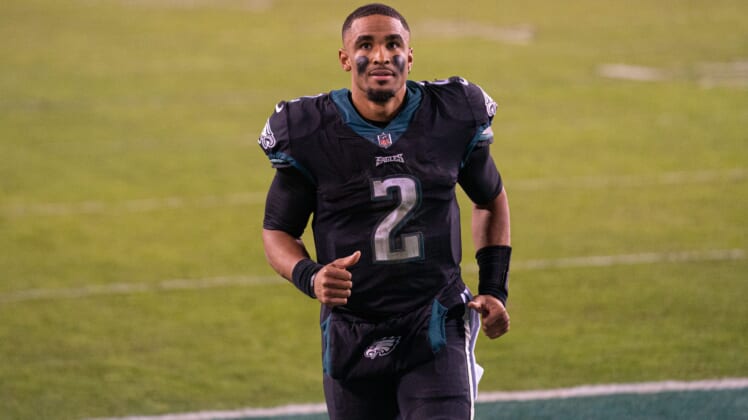 Overreactions will be aplenty after Philadelphia Eagles rookie quarterback Jalen Hurts led his team to a shocking win over the New Orleans Saints in his first NFL start Sunday afternoon.

A lot was made about Eagles head coach Doug Pederson benching Carson Wentz in favor of Hurts after they dropped their fourth consecutive game last week. Simply put, Pederson needed to make a change under center to keep his job. Philadelphia also entered Sunday’s Week 15 outing still very much alive in the NFC East race.

Philadelphia opened up a 17-0 lead at the half by virtue of some solid play from Hurts under center and a huge game-breaking run by Miles Sanders.

When all was said and done, Jalen Hurts and his Eagles ended the Saints’ nine-game winning streak, coming out on top by the score of 24-21. It wasn’t for some late-game drama as the Saints pushed the game to within one score before a last-second onside kick failed.

Even then, Jalen Hurts made history in his initial professional start. The reigning Heisman finalist became the first quarterback to pass for north of 100 yards while reaching the century mark on the ground in his first NFL start. Jalen Hurts would ultimately completed 17-of-30 passes for 167 yards with one touchdown and zero interceptions. He added 106 yards on 18 attempts on the ground.

By virtue of this win, Philadelphia finds itself at 4-8-1 and 1.5 games out of first place in the NFC East. Time will tell whether the team has a shot at playing meaningful January football. But we do pretty much know one thing. Carson Wentz is no longer the face of the franchise. In fact, he might have made his final start as a member of the Eagles.

Philadelphia Eagles have their quarterback in Jalen Hurts

A report earlier on Sunday from ESPN’s Adam Schefter indicated that the Eagles plan to keep Carson Wentz next season and view him as an important part of their organization moving forward.

This report is about as obvious as it gets. Rumors continue to circulate that Philadelphia will look to trade Wentz after the season. Leaking this information to the media does a few things. More than anything, it’s the Eagles way of playing the PR game.

They are not going to publicly admit that Wentz is on the trade block, lowering any compensation the team receives in the process. Secondly, it will continue to light a fire under Jalen Hurts following a record-breaking NFL starting debut. Finally, there’s no reason to send this type of message to Wentz and the rest of Philadelphia’s veteran-laden locker room.

What we do know is that these Eagles looked like a completely different team with Jalen Hurts under center. Wentz was sacked 50 times in the season’s first 12 games. Hurts did not go down a single time against a Saints defense that had given up 44 combined points in their previous five games.

Meanwhile, Hurts did not throw an interception despite losing a fumble. This came after Wentz tossed a league-high 15 interceptions while putting the ball on the ground 10 times in 12 starts. We previously focused on how Wentz simply did not give these Eagles much of a chance to win due to his turnover proneness. That was not an issue for Jalen Hurts in his starting debut.

The major backdrop relating to any Wentz-related decision has to be his contract. The former No. 2 pick is playing under a four-year, $128 million deal. He’s set to count nearly $66 million against the cap over the next two seasons.

Not only would the Eagles take a huge dead cap hit by trading Wentz, it might be hard for another team to take on that contract. These are the decisions that will have to be made behind the scenes should Philadelphia believe Jalen Hurts is a better option than Wentz long-term.

However small of a sample size it was on Sunday, Jalen Hurts more than showed he’s read to shine in the NFL. Regardless of how the next three games play out from a team-wide perspective, his performance under center will tell us a lot about the Eagles moving forward.

Yes, that could very well include a Carson Wentz trade.

Click below for more Philadelphia Eagles news and rumors