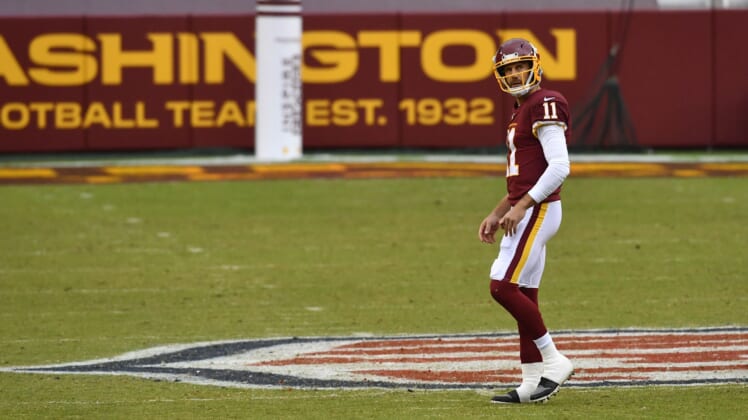 With two minutes left in the first half Sunday afternoon, FedEx Field might have well been filled with 82,000 fans for the first time this season. The noise was deafening. While most seats were empty, the feeling of an entire sports world behind one man took center stage. Alex Smith returning from injury. A great sports moment.

Fans did not need to be present to feel the standing ovation Washington Football Team quarterback Alex Smith got when he played his first real snap of football in 693 days. Smith received 693 days worth of cheering in an empty stadium. Washington fans, football fans and people who never watched football got chills sent down their spines. Some shed a few tears as they witnessed the greatest comeback in football history.

On November 11th, 2018, Smith’s life took a hard left turn. Washington was just outside the red zone versus the Houston Texans halfway through the third quarter. Houston sent a blitz and Smith was sacked. It was not just a sack. The whole stadium seemed to stand still as Smith laid on the ground. Everyone watching that game knew this was not an ordinary injury. For Washington fans, flashbacks of the Joe Theismann injury came haunting back.

Where was I when this happened?

I was at a local Maryland sports bar as I watched the most gruesome injury I have ever seen. There were at least 25 televisions in the entire establishment, and I couldn’t hear anything. All I saw was Alex Smith laying in agony on the ground. I watched replay after replay, and my heart sank. It made me sick not only because of the injury, but an injury like that happened to a standup person.

It is random how things come back full circle. It seemed too fitting for me to watch Alex Smith make his return on my couch hearing no noise. I did not hear a single fan. I did not see thousands of people on their feet applauding one of the toughest men in football. Yet, exactly like November 11th, I heard nothing and felt everything.

I am one of the millions of people who heard nothing but felt everything. Smith did not get the standing ovation he deserved. He deserved minutes of complete cheering. He made the greatest comeback in history, and he deserved to have that moment.

With everything going on in the world, Smith’s return provided an uplift in the hearts of everyone who watched. Maybe, his return came at the perfect time. He may not have received the ovation he deserved. His impact, though, may have been far greater than he could have imagined.