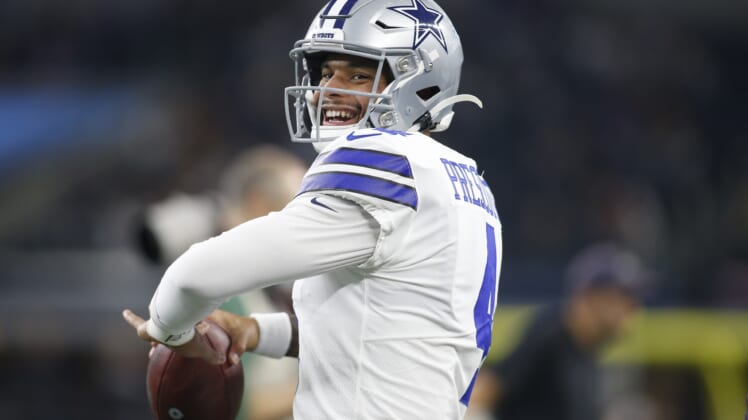 The Dallas Cowboys will soon have Dak Prescott under contract, as ESPN’s Adam Schefter reports the quarterback will sign his franchise tag by Monday.

As noted by Schefter, the exclusive franchise tag that Dallas used to secure Prescott this year is worth $31.4 million. Assuming he does sign that contract, Prescott and the Cowboys will have until July 15 to work out a long-term deal.

The good news for the ‘Boys is that Prescott would be contractually obligated to report to training camp on time, once he does sign.

The two sides have not really gotten together in a serious way to negotiate a contract in months, per recent reports. If no long-term contract is signed, then Prescott would be the seventh-highest-paid quarterback in the NFL for the 2020 season.

The biggest issue standing in the way of a deal is how long the contract will be. Prescott would reportedly rather sign a four-year contract, while Dallas wants him locked up for one more year on a five-year contract.

The Cowboys are committed to keeping Prescott as the franchise quarterback for the long term. Jerry Jones recently compared the quarterback to his own son, and it’s hard to imagine this not ending amicably.

Based on the way Prescott has played since his rookie season, it’s not hard to see why the ‘Boys are sold. Last year, the former fourth-round pick out of Mississippi State had a career year. He passed for 4,902 yards with 30 touchdowns and 11 interceptions, adding another three scores on the ground.

Those are elite numbers for an NFL quarterback. So, while many want to debate whether Prescott deserves to set a new market for quarterbacks, he’s clearly worth a big-money contract.