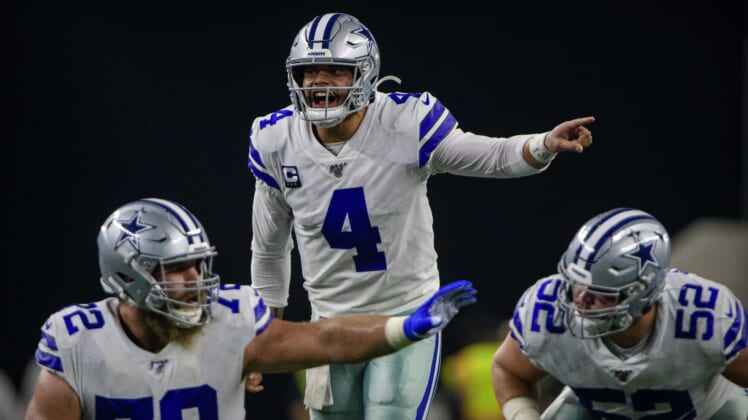 Dak Prescott and the Dallas Cowboys have been locked in a contract stalemate for months. While both sides want the same thing — Prescott to remain in Dallas for years to come — they just can’t seem to close the gap on a long-term contract extension.

The holdup preventing both parties from reaching an agreement is rather simple. Prescott is determined to sign a four-year deal, while the Cowboys are sticking to their guns and pushing for a five-year pact. Dallas clearly isn’t willing to bend and with the organization using leaked offers to sway over the fans, it’s time for Prescott to stick to his guns.

Missed opportunity: The Cowboys put themselves in this position. Prescott entered the 2019 offseason ready to negotiate a long-term extension and negotiations started early. However, a re-examination of the team’s actions demonstrates how Jerry Jones already bungled this situation.

The Cowboys decided to let Prescott, who was already underpaid on his rookie contract, play out the rest of his deal. Prescott bet on himself, putting contract talks aside. He then set career-highs in passing yards (4,902), touchdowns (30) and quarterback rating (99.7).

The offseason: After Prescott proved he could take his game to the next level, the Cowboys acknowledged he was their guy. Prescott’s agent already held the leverage as a free agent and Dallas gave him even more words to use against the organization.

The newest offer: Prescott has reportedly insisted from the beginning that he wants a four-year contract. It would allow him to enter free agency while still in the middle of his prime. The Cowboys want control, as evident by their history of five-year extensions, so Prescott pushed back with this reported compromise:

The Cowboys leaked the counter-offer almost immediately, leading to a wave of public scrutiny from fans and former players.

The economics: Prescott has quickly become the greedy villain in this saga, seeking $10 million more than the highest-paid NFL player. While the number might sound ridiculous, it could be a bargain for the Cowboys.

Even if the NFL takes an economic hit during the COVID-19 pandemic this season, billions of dollars will be made in the future. While Prescott’s deal might be staggering, the money coming the NFL’s direction is even more incredible.

The Bottom line: Prescott and his agent will continue to be portrayed as greedy, setting absurd figures on a record-breaking contract that many feel he isn’t worth. Instead, Prescott must just focus on sticking to his guns and taking advantage of the value he brings.

The Dallas Cowboys don’t have the leverage. They’ve made it known they are committed to keeping Prescott beyond the 2020 season, even if that means using the franchise tag multiple times. Jerry Jones knows this is the only option because the risk of losing an outstanding quarterback and being in purgatory for the next decade is far more crushing then overpaying a top passer.

Quarterbacks are the most coveted asset in the NFL. This is why teams reach for unproven passers in the NFL Draft, just hoping to land a franchise-caliber quarterback. It’s also why even above-average talents rarely hit free agency.

Dallas should take the offer Prescott made and run with it. He’ll prove to exceed the $185 million price tag and gives this team its best chance to win the Super Bowl. If they don’t, the Cowboys are destined for quarterback purgatory and that is something this organization can’t afford to experience.