Will Dak Prescott find a new team in 2021? Is Mike McCarthy a one-and-done coach? Check in here for the latest Dallas Cowboys rumors. 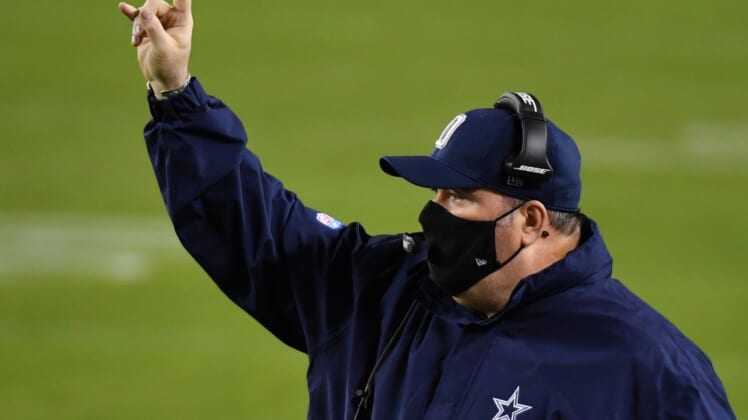 The Dallas Cowboys are facing an uncertain future amid a rough 2020 season, and the media attention and rumors that inevitably surround America’s Team are intensifying as the franchise tries to come up with solutions for a rapid rebuild.

One of the big decisions looming in Dallas is what to do with quarterback Dak Prescott. After the Cowboys didn’t reward him with a long-term contract, he placed under the franchise tag this year before a season-ending injury. Based on the circumstances around the team and some of the latest chatter, it sounds like Prescott may actually join another team in 2021.

When the Dallas Cowboys sought a new head coach to replace Jason Garrett, they were sold on Mike McCarthy instantly. After hearing about how he embraced analytics and watched every snap of the team’s game, only to admit later he lied to help get the job.

Things haven’t gone well in Dallas this season. Between injuries along the offensive line, a woeful defense and Dak Prescott’s gruesome injury, the team finds itself at the bottom of the NFC East. Along the way, McCarthy has made a series of baffling decisions and been called out by players.

On ESPN’s Sunday NFL Countdown, Chris Mortensen reported that McCarthy’s job in Dallas is safe. Jerry Jones is giving no consideration to firing him after one season, even if the team loses its final four games.

Entering Week 14 with a 3-8 record, the best-case scenario for Dallas is a 7-9 record. With the San Francisco 49ers, Philadelphia Eagles and New York Giants remaining on the schedule, there’s a real chance Dallas finished 4-12 in 2020.

But, Jones is going to stick by the head coach who deceived him in the interview process months ago. When the season is over, the Cowboys will likely point to injuries as the big reason why they fell short of expectations.

There have been a lot of mistakes made by Jones in recent years. From signing Ezekiel Elliott to a huge extension, hiring McCarthy and not paying Prescott. In the end, all three will prove costly in 2021.

When ESPN’s Adam Schefter speaks about a player’s future, even if it’s not a direct report, it’s not for nothing. Thus, his latest TV commentary on the Cowboys’ quarterback is particularly notable, as Schefter highlights not only the tight cap situation and how that impacts a long-term contract for Prescott, but also how he’d be an upgrade for other teams:

“Think about all the teams that could use a player like Dak Prescott,” Schefter said. “Not only in terms of talent, but in terms of leadership and the cultural change that he would bring.”

Schefter called Prescott’s leverage “enormous” heading into the offseason, in spite of his injury — and he has a great point there. Franchise tagging Prescott again comes with an increased price tag, and Dallas can ill-afford to do that. Per OverTheCap.com, because of the lowered salary cap brought on by the COVID-19 pandemic, next year’s team only has $25.6 million to play with — not counting whatever Prescott’s salary would be in 2021.

Of course, Prescott is going to command more money than $25.6 million by himself with a franchise tag. The only other solution beyond reshuffling troves of players is for Dallas to backload Prescott’s deal in a massive way, but given how risky that is and the fact that Prescott has been underpaid for his entire starting tenure with the Cowboys, that doesn’t seem like a viable option, either.

Prescott averaged 371 passing yards per game in five starts this year, with nine touchdowns, four interceptions, a 68% completion rate and 99.6 passer rating. That was good for the No. 8 spot in Pro Football Focus’ player grades. For his career, Prescott has a TD-to-INT ratio of 106-40, has a 42-27 record as a starter and has thrived throughout his time in Dallas despite the team’s perpetual underachieving.

Talk about creating leverage, not only for his standing in Dallas, but on the open market as well, where it could become a bidding war for Prescott’s services.

Well, Schefter puts it well: the opportunities outside of Cowboys owner Jerry Jones’ orbit are quite vast. Prescott could fill obvious quarterback needs in Chicago or Indianapolis. He could succeed either Tom Brady or Drew Brees in Tampa Bay or New Orleans respectively, provided those aging signal-callers are in the midst of their final years. It certainly seems as though Brees is at least.

Prescott even has the potential option to go to a Dallas rival in the NFC East such as Washington, who’s 5-7 this year yet could use an upgrade at quarterback, since the Football Team doesn’t appear interested in developing Dwayne Haskins.

Another intriguing destination is the San Francisco 49ers. Their head coach Kyle Shanahan is one of the NFL’s most brilliant offensive minds, and Prescott would almost assuredly be an upgrade over incumbent Jimmy Garoppolo. That’s saying quite a lot, considering Jimmy G has done little else but win when healthy in San Francisco, even guiding the Niners to a Super Bowl appearance last season.

All of those aforementioned landing spots present a clear coaching upgrade, too. Mike McCarthy is failing in spectacular fashion amid his first year with the Cowboys. The longtime Green Bay Packers boss, to be fair, hasn’t had Prescott for a lot of the way, yet even before the QB’s injury, Dallas players weren’t buying in.

The Cowboys are a mess. They have a stubborn owner in Jones who doesn’t know how to prioritize contracts and players, evident in his decisions to extend linebacker Jaylon Smith and running back Ezekiel Elliott before Prescott. Furthermore, the McCarthy-led coaching staff seems out of touch with the modern NFL, and it wouldn’t be a shock to see young offensive coordinator Kellen Moore bail for greener pastures following a nightmarish 2020 campaign.

Turning things around in Dallas would be quite an achievement for Prescott. Based on Jones’ recent comments and the lack of a long-term contract agreement before, it doesn’t seem like the Cowboys have valued him well enough to date to justify Prescott staying — and they probably can’t even afford to keep him anyway.