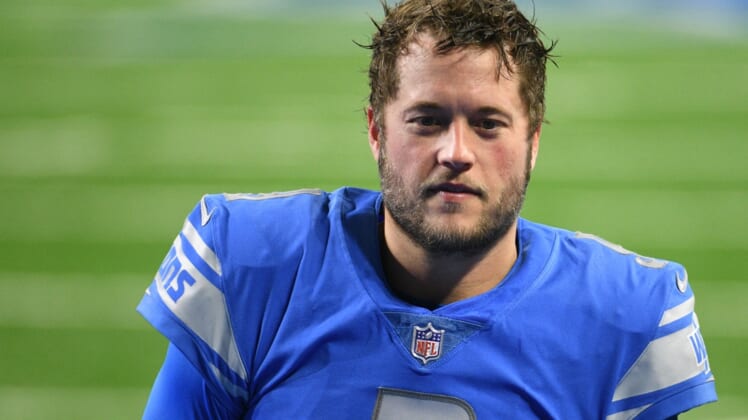 Less than two years after reaching the Super Bowl, the Los Angeles Rams have a new quarterback, acquiring veteran Matthew Stafford from the Detroit Lions on Saturday in exchange for Jared Goff, according to multiple reports.

Stafford has played in just three career postseason games but has delivered a productive 12-year career in Detroit, throwing for 45,109 yards in 165 games with 282 touchdowns and 144 interceptions.

Goff has played in six playoff games over his five-year career, helping the Rams to the Super Bowl following the 2018 season. But he struggled in that game, throwing for 229 yards as the New England Patriots earned a 13-3 victory in the lowest scoring Super Bowl ever.

New Lions general manager Brad Holmes was hired by the team this month after serving as the Rams’ director of college scouting. The Lions and Stafford already agreed to mutually part ways.

“We’ve got quite a few offers and so it looks like we’ve got some trade partners,” new Lions head coach Dan Campbell said, according to the Detroit Free Press. “We’re just trying to work out the best scenario and see what’s best for us, ultimately.”

Stafford, who turns 33 next month, did not lead the Lions to an NFC North division title. He currently has two years left on a team-friendly contract due to pay him a combined $43 million — $20 million this year and $23 million next year.

The trade will be in principle only until the new league year begins in March. Stafford is due a $10 million roster bonus on the fifth day of the 2021 league year.

Detroit would carry $19 million in dead money on their salary cap in 2021, but a trade would yield a savings of $14 million in cap space and $20 million in cash at a time the NFL’s salary cap is expected to decrease, NFL Network reported.

Stafford started all 16 games and threw for 4,084 yards with 26 touchdowns and 10 interceptions last season, despite playing through rib, right thumb, ankle and neck injuries. None of the injuries are expected to require surgery.

Stafford has gone 74-90-1 for the Lions and has completed 62.6 percent of his passes. His 38 game-winning drives rank eighth all time, and his 31 fourth-quarter comebacks are seventh-best in league history.

His most recent trip to the playoffs was in 2016, when Detroit went 9-7 in the regular season before losing to Seattle in the wild-card round.

Goff, 26, is a two-time Pro Bowler, but his quarterback rating the past two seasons was worse than the previous two.

Goff threw for 3,952 yards and 20 TDs with 13 interceptions in 15 games this past season, undergoing thumb surgery after a Week 16 injury. He returned off the bench two weeks later to help the Rams to a wild-card round victory over the Seattle Seahawks, but threw for just 155 yards in that game.

The Rams went 9-6 in the regular season with Goff as the starter and 10-6 overall. Los Angeles fell 32-18 in the divisional round of the NFC playoffs to the Green Bay Packers when Goff was 21 of 27 for 174 yards and one touchdown.